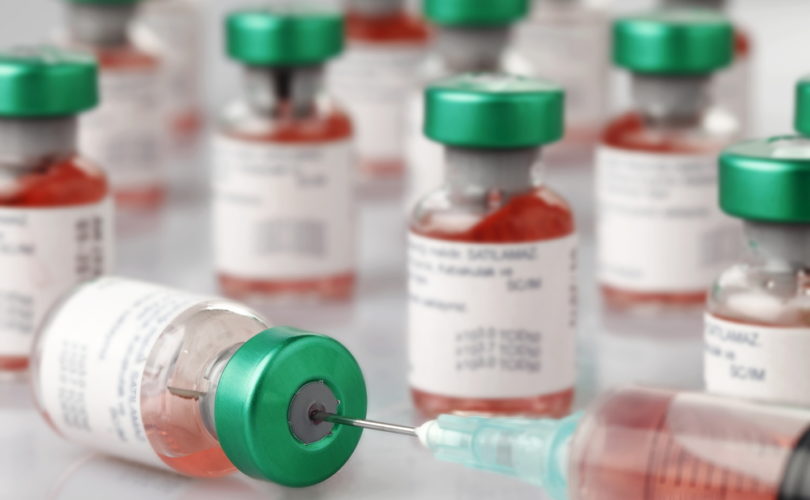 Senate Bill 1055, sponsored by state Sens. Tonya Schuitmaker, Mike Kowall, Patrick Colbeck, Judy Emmons, Joe Hune, and Mike Shirkey, calls on the state Department of Health and Human Services to maintain an internet-accessible list of which vaccines were developed using stem cells derived from the tissue of aborted babies, as well as alternative vaccines when available.

Doctors would have to present this information to patients before administering vaccines as well. The list would be updated every year, and the requirement would take effect 90 days after being signed into law.

“The existence of these vaccines requires patients and parents to make important ethical decisions,” Right to Life of Michigan president Barbara Listing said. “Sadly, many people are unaware of these facts, including many doctors and nurses. Patients need accurate information to make informed decisions, and many are not getting that now.”

The U.S. Food and Drug Administration currently approves a number of vaccines produced using two cell lines, MRC-5 and WI-38, obtained from 1960s-era elective abortions. Federal law gives vaccine manufacturers legal immunity from lawsuits or charges from injured patients, instead delegating such cases to the Office of Special Masters of the U.S. Court of Federal Claims. People injured by vaccines may be eligible to financial compensation from the government-run National Vaccine Injury Compensation Program.

Right to Life of Michigan currently maintains its own list of abortion-derived vaccines and ethical alternatives but hopes the law would make awareness and avoidance of the moral conflict more widespread.

“We should all agree that the existence of alternative vaccines proves it’s unnecessary to take human life to create effective vaccines,” she said. “Vaccine manufacturers should only use ethical sources for future vaccine production.”

Some pro-lifers, and even the Vatican’s Pontifical Academy for Life, accept abortion-derived vaccines as morally permissible in the absence of alternatives. Others argue that the vaccines are not only immoral but that their origins “taint” them with an increased threat of medical complications.

Dr. David Gorski, editor of the website Science-Based Medicine, attacked the bill, claiming it was “designed to use emotive language to dissuade parents from vaccinating.” Right to Life of Michigan responded by noting that the legislation’s language was “undeniably true,” and that state health officials, not political activists, will be the ones drafting the specific, finalized language doctors must give patients.

“How does giving people information control their choices?” the group asked. “Isn't it the opposite?”

Michigan is one of 18 states that allows exemptions to vaccine mandates based on religious or other objections. The state is also currently in the midst of the largest Hepatitis A outbreak in the United States, which has killed 27 people since 2016. State officials attribute the problem in part to a lack of supply, and there currently exists no approved, abortion-free alternative, but better tracking of the different options could help Michiganders with moral or religious concerns protect themselves and others from other diseases in the future.