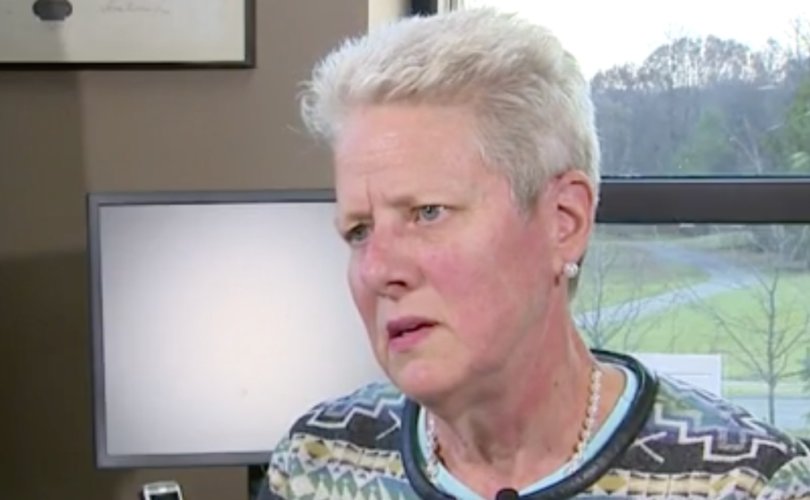 EAST GRAND RAPIDS, Michigan, November 27, 2019 (LifeSiteNews) – A Catholic priest in East Grand Rapids, Michigan, has reportedly denied Holy Communion to a county judge because of her having contracted a so-called “marriage” with another woman.

According to a report on the website Wood TV, Father Scott Nolan of St. Stephen Catholic Church recently contacted Judge Sara Smolenski by telephone to inform her that because of her “marriage” she could not receive Communion. Smolenski claims: “The way he said it was ‘because you’re married to Linda in the state of Michigan, you cannot accept [C]ommunion,’ that’s how he said it.”

Judge Smolenski has reportedly been “married” to another woman since 2016. She claims to have been a member of the parish for 62 years and the report states that she recently donated $7,000 to the parish building fund. According to the report some members of the parish support Fr. Nolan, while others are calling for him to be removed and are seeking a meeting with the local bishop.

“Smolenski[,] who has been on the bench for nearly 30 years, comes from a family of prominent community members, including her father who was also a district court judge, and her brother, a state appeals court judge,” the Wood TV report says.

LifeSiteNews is attempting to reach Fr. Nolan for an interview.

With regards to the administering of Holy Communion, the law of the Catholic Church is made clear in Canon 915 of the 1973 Code of Canon Law. Those who are “obstinately persevering in manifest grave sin are not to be admitted to Holy Communion,” canon 915 says.

In March of this year, Kansas Archbishop Joseph Naumann gave public support to a priest of his diocese who refused to allow a couple in a homosexual “marriage” to enroll their child in a Catholic school. At the time he said “the decision of the same-sex couple to enter into marriage publicly contradicts Catholic moral teaching on the sinfulness of homosexual acts and is part of an effort to normalize immoral actions.”

In 2014, American Cardinal Raymond Burke answered questions on how a priest should proceed when he encounters a Catholic politician or other public figure presenting him or herself for Communion while at the same time publicly supporting abortion or homosexual “marriage.”

Cardinal Burke said: “The exclusion of those who persist in manifest and grave sin, after having been duly admonished, from receiving Holy Communion is not a question of a punishment but of a discipline which respects the objective state of a person in the Church.”

Cardinal Burke continued: “In the case of a politician or other public figure who acts against the moral law in a grave matter and yet presents himself to receive Holy Communion, the priest should admonish the person in question and then, if he or she persists in approaching to receive Holy Communion, the priest should refuse to give the Body of Christ to the person.”

Last month a Catholic priest in South Carolina refused Holy Communion to Joe Biden, former U.S. Vice-President and current Democratic presidential candidate, because of his public support for abortion on demand. Shortly afterwards, Biden – who has also officiated a same-sex “wedding” – claimed that he has never been denied Communion before and has even received Holy Communion from Pope Francis. Pope Francis has made no statement in response to Biden’s claim.