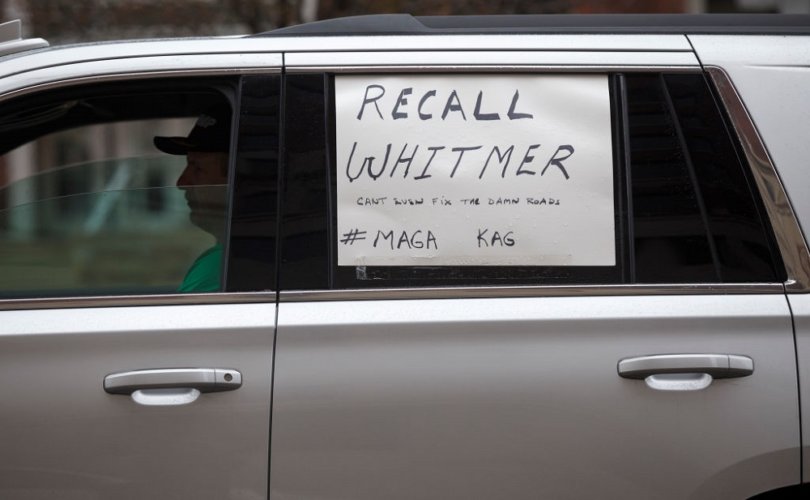 September 8, 2020 (Daily Signal) — Some Michiganders say the law that Gov. Gretchen Whitmer is using to keep their state under COVID-19 lockdown is being abused, and they are pushing to reopen their state.

“Gov. Whitmer’s interpretation and use of the [Emergency Powers of Governor Act] is completely novel,” said Michael Van Beek, director of research at the Mackinac Center for Public Policy, a Midland, Michigan-based free market think tank.

The Emergency Powers of Governor Act, enacted in 1945, has been used only a handful of times before now, according to a new report from the Mackinac Center.

Specifically, according to the report, the act was used “in response to five emergency situations: labor unrest in Hillsdale in 1964, urban riots in 1967 and again in 1968, and twice in 1970, once for high mercury levels in Lake St. Clair and Lake Erie, and a second for a minor riot in Ypsilanti.”

“Constitutional concerns followed previous uses of these powers, but Gov. Whitmer has taken these to a new level,” Van Beek said. “No other governor has attempted to use the [law] to gain unilateral control over an emergency for an indefinite period.”

The push to open the state can be found at Unlock Michigan.com, where Michiganders are circulating petitions for a proposal that would repeal the Emergency Powers of Governor Act. The group says the law enables Whitmer to “govern by decree, without end, and without accountability.”

On its website, UnlockMichigan says, “Using this obscure, antiquated law, Governor Whitmer has issued a blizzard of over 100 executive decrees, with … no public input — and no end in sight,” adding:

… We believe Whitmer’s crushing lockdown of life and business across Michigan is a dangerous threat to our livelihoods and constitutional liberties.

The initiative would repeal the Emergency Powers of Governor Act of 1945, which UnlockMichigan.com says the governor “has misused … to assume sweeping, permanent powers the legislature never intended a governor to have, in violation of the Separation of Powers doctrine.”

David Guenthner, senior strategist for state affairs at the Mackinac Center, told The Daily Signal in an email that Michiganders are well on their way to putting Whitmer, a Democrat elected in 2018, in check.

“The petition needs 340,000 validated signatures in order to start the 40-day clock for legislative action,” Guenthner said. “If the legislature fails to pass the initiated legislation as proposed within the 40 days, it automatically goes on the next general election ballot in 2022.”

Unlock Michigan said earlier this week it had already garnered 300,000 signatures, with the third hundred thousand being collected in just 10 days.

A request for comment from Whitmer’s office was not returned Wednesday.

Meanwhile, a similar effort is underway in neighboring Ohio, where Ohio Stands Up! has filed a lawsuit against Ohio Republican Gov. Mike DeWine’s March 9 emergency health order, which is still in effect.

“We believe that the response to COVID-19 has been the greatest fraud ever perpetrated on the American public,” Thomas Renz, a lawyer, said Monday in a press release for Ohio Stand Up!

“The objective of this legal action is to force the state to honor the Constitution and to stop the lies, manipulation and fear-mongering intentionally being promoted by public health officials and elected officials.”