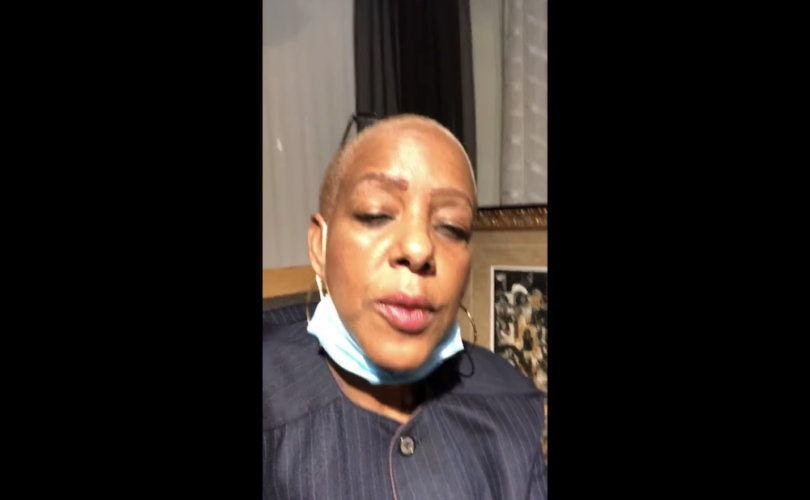 December 10, 2020 (LifeSiteNews) – A Michigan Democrat is under fire for a video message urging “soldiers” among her supporters to make supporters of President Donald Trump “pay” in unspecified ways for racist and threatening messages she claims to have received from anonymous detractors.

Bridge Michigan reported that State Rep. Cynthia Johnson of Detroit claims she received various hateful messages and death threats in response to her criticism of the Trump campaign lawsuits spearheaded by former New York Mayor Rudy Giulianii contesting alleged fraud and illegality in the presidential election, which she called a “clown show.”

Over the weekend, she posted some examples online, including a clip of a voicemail in which a woman calls her a racial epithet and says she should be “swinging from a f***ing rope.”

In a Facebook response video, Johnson called on her supporters to fight back against a vaguely-defined enemy – first in a nonviolent way, but then her remarks took a darker turn.

“So this is just a warning to you Trumpers: be careful,” she continued. “Walk lightly. We ain’t playing with you. Enough of the shenanigans. Enough is enough. And for those of you who are soldiers, you know how to do it. Do it right. Be in order. Make them pay.”

Following outrage over her comments, leaders of the Republican-controlled Michigan House announced they were punishing Johnson by stripping her of her committee assignments and “looking into further disciplinary action as the proper authorities conduct their own investigations.”

“Threats to either Democrats or Republicans are unacceptable and un-American,” said current House Speaker Lee Chatfield and his incoming successor Jason Wentworth in a joint statement. “They’re even more unbecoming of an elected official.”

Michigan Attorney General Dana Nessel (who recently used her office to threaten disseminators of a leaked video raising concerns about Detroit poll worker training) claims to have “received more than 80 phone calls” on Wednesday alone regarding threats against Johnson, though her statement does not shed light on the number or credibility of the threats themselves.