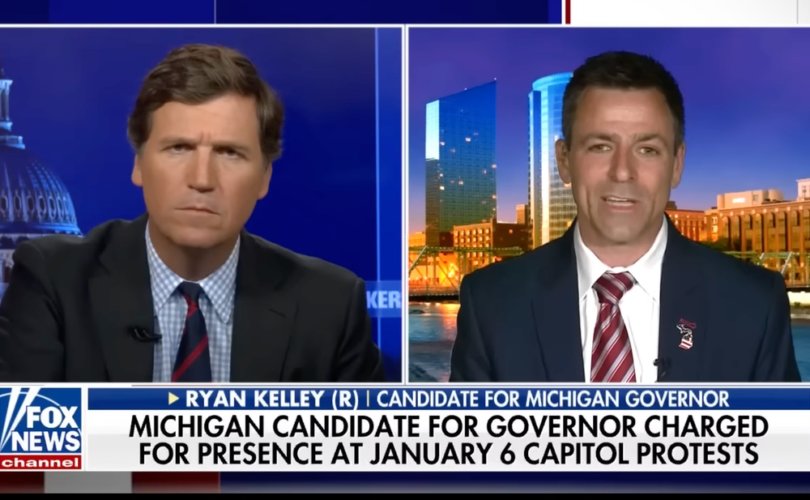 Kelley attended protests on January 6, 2021 in D.C., but did not enter the U.S. Capitol. Kelley told Tucker Carlson on Monday that the June 9 arrest at his home in Allendale came just 12 hours after President Joe Biden joked about throwing political opponents in jail. Kelley has been charged with four misdemeanors.

.@jimmykimmel: “It’s like you are playing Monopoly with somebody who…won’t follow any of the rules, then how do you ever make any progress if [Republicans are] not following the rules?”@JoeBiden: “We gotta send them to jail.” pic.twitter.com/CTHK8nGdlj

It also occurred the same day House Democrats and several liberal Republicans began their professionally produced and televised hearings on the violence at the Capitol.

“There is no coincidence in the timing of this,” Kelley said. “It’s right in alignment with all this political theater that the Democrats are pushing with their J-6 committee, and there’s no coincidence here.”

He noted that some polls show him winning. The Michigan GOP primary is August 2.

Kelley said he wants to continue to to get his message out there and that he intends to win in both August and November.
The Catholic father of six has run on a platform opposed to COVID lockdowns and in support of medical freedom.

Maija Hahn, founder of United for Healthcare Workers, recently told LifeSite she believes the timing of Kelley’s arrest is intentional.

“Ryan is a good man: a husband, father, and patriot who loves his country, who sees this country is in danger by a biased media and corrupt government,” Hahn said. “He’s doing everything he can to defend truth and justice. He is not a terrorist. He was not in the Capitol building that day.”

Kelley’s opponent, Democratic Governor Gretchen Whitmer, shut down large swaths of the Michigan economy and has recently taken it upon herself to try to stop a 1931 law against abortion from being enforced if Roe v. Wade is reversed.

Whitmer has faced criticism for shutting down her state while flouting her own rules on travel and masks. Her husband appeared ready to break his wife’s admonition to reduce trips and asked a marina owner to take his boat out, saying that he was married to the governor.