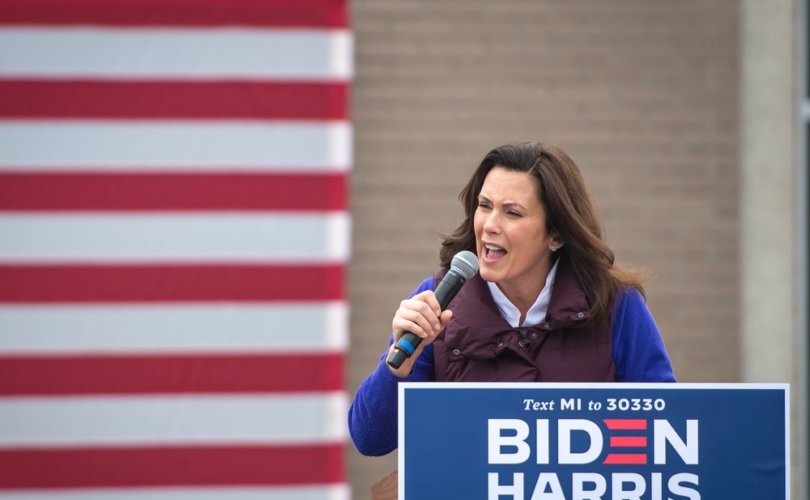 In her veto message, Whitmer claimed that the provisions “would create a gag rule preventing reproductive health-service providers from even mentioning abortion and otherwise make it harder for women to get the health care they need,” and more generally “harm women’s health care.”

Michigan House Appropriations Committee chair and Republican state Rep. Thomas Albert responded by accusing Whitmer of taking a selective approach to “choice,” in that she only applies the preeminent pro-abortion buzzword to “the deadly choice that ends a human life.”

“Many pregnant women may need assistance to continue work on earning their degrees, and the resources the governor vetoed today would have helped them,” Albert continued, adding, “I do not understand why the governor is opposed to focusing on proven and promising research methods that do not involve aborted babies or barbaric practices with their remains. Human beings deserve to be treated with dignity — not bought or sold like a basic commodity.”

With the fall of Roe v. Wade effectively shutting down the abortion industry in numerous states, abortion allies accuse pro-lifers of depriving women of “essential” health care. In fact, the pro-life movement has long operated and supported crisis pregnancy centers, which offer a wide range of support to women facing unplanned and unwanted pregnancies, and have outnumbered Planned Parenthood locations since before the end of Roe (2,700+ CPCs versus roughly 600 PPs). Additionally, there are more than 17,000 federally-qualified health centers and related/similar providers.

Despite being relieved at this, however, pro-abortion voices such as Whitmer, President Joe Biden, and U.S. Sen. Elizabeth Warren have condemned life-affirming pregnancy care options.

As for the stem cell provision, stem cells have for decades been one of the most promising fields of medical research, with applications to the treatment of countless diseases, though it has been marred by controversy over one particular means of obtaining them: destroying human embryos.

Embryo-destructive research was originally rationalized on the grounds that embryonic stem cells are pluripotent, meaning they have the ability to become any type of tissue. But investment in this subset of the field has been steadily declining over the years as science has learned how to induce pluripotency in adult stem cells from other sources, such as bone marrow and umbilical cord blood.