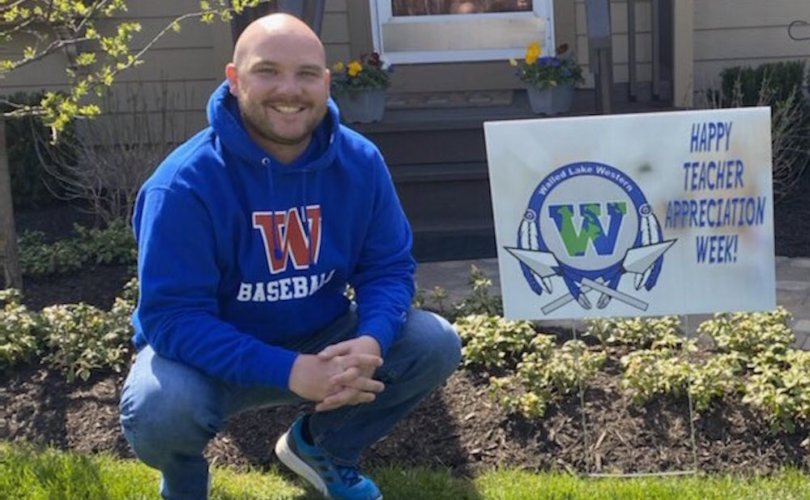 “I’m done being silent. @realdonaldtrump is our president. Don’t @ me,” Justin Kucera tweeted on July 6.

I’m done being silent. @realDonaldTrump is our president ❌��

He told the Washington Free Beacon that he was called in for a meeting with the school’s principal, superintendent, and human resources department four days later.

“They initially took my statement on why I tweeted those tweets and they told me they would have a decision about my future employment in the upcoming days,” Kucera said. “When they completed the meeting, I was told I had the option to either be fired or resign.

“I know a lot of people are just rooting for Trump to fail, and I don't think that anybody should do that,” he added. “Agree with him or not, you should want the president to do well. I apologized that (my tweet) brought so much negative attention, but I'm not sorry for what I said.”

7 Action News obtained a screenshot from an area parent showing another since-deleted tweet in which Kucera wrote “liberals suck man.” The coach insisted, “I never brought (politics) into the classroom. And that’s the truth. And students and parents will vouch for me on that.”

The school district responded with statements to 7 Action News denying his Trump support was the basis for Kucera’s firing, without offering an alternative explanation.

“Thank you for your inquiry – accurate information is essential,” the district said. “Please know that no disciplinary action was taken as a result of any support of President Trump and we are unable to comment on specific staff discipline and personal matters. … As a matter of policy and practice, Walled Lake Schools does not comment on current and/or former employees as it relates to specific personnel issues.”

The Free Beacon quoted several parents and teachers who vouched for both the quality of Kucera’s teaching and for his nonpartisan posture in the classroom.

“Prior to Mr. Kucera's tweet, I cannot recall an instance where he shared his political affiliations while teaching or coaching,” recent graduate Bryant Hixson said. “My political views have no impact on how I feel towards Mr. Kucera. Mr. Kucera has always been supportive of me as my AP World History and student leadership teacher and as my baseball and basketball coach.”

“Justin coached my son his entire high school career and also was his AP History teacher and student leadership teacher for two years,” a parent in the district said. “I know Justin very well. If there's one thing that I would commend Justin for is, he always tried to stay apolitical. He always tried to stay right down the middle, avoid (political) conversations, and let the students make their own call based on their own life experiences.”

The Free Beacon also found that two examples of other Walled Lake Western teachers who vocally opposed Trump without facing similar consequences. Paulette Loe, who has since retired, encouraged students to read an Atlantic piece on “how to beat Trump,” and kindergarten teacher Nicole Estes wrote Facebook posts calling Trump a “sociopath” and “narcissist” during the 2016 election.