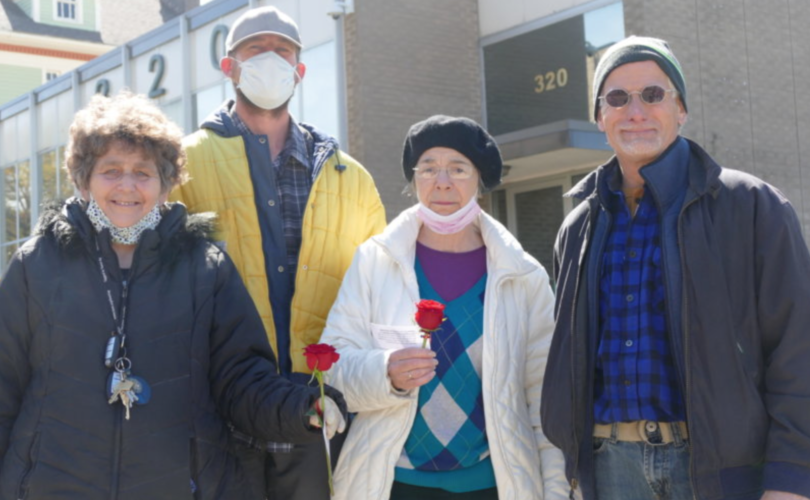 GRAND RAPIDS, Michigan (LifeSiteNews) — Four pro-life activists, including Dr. Monica Miller, the director of Citizens for a Pro-Life Society, were acquitted on all charges of “trespassing” in a Western Michigan courtroom today. Miller, Ann Norton, Heather Idoni, and Robert Kolavy were charged with trespassing at an abortion facility in downtown Grand Rapids in May 2020 during a Red Rose Rescue. Approximately 35 other pro-lifers also protested outside the abortion center that day.

A Red Rose Rescue is a particular form of pro-life activism that involves entering an abortion facility, handing pregnant women roses, and sharing with them messages of encouragement so they won’t go through with their scheduled abortion. Red Rose Rescuers often refuse to leave abortion facilities, risking arrest.

The Red Rose Rescues are something of a revival of successful tactics used during the early days of the pro-life movement, before the Freedom of Access to Clinic Entrances Act (FACE) imposed harsh penalties on pro-lifers who save babies by physically blocking “access” to abortion facilities.

LifeSite was on the ground and reported on the May 2020 rescue attempt when it occurred.

Today’s trial was held at the 61st District Court in Kent County in downtown Grand Rapids. It was live-streamed at 9:00 a.m. on the YouTube channel of Judge Jennifer Faber. Media were not allowed to enter the courtroom due to COVID-19 restrictions. Click below to watch the proceedings.

Testimony came from Kelly Benzin-Brinks as well as several Grand Rapids Police officers. Benzin-Brinks manages the Heritage Women’s Clinic where the rescue took place. Abortionist Thomas Gordon operates the center. Pamphlets with a list of Gordon’s prior civil and health code violations were distributed outside during the rescue attempt.

Robert Muise of the American Freedom Law Center served as an attorney for Miller and her fellow rescuers. He effectively interrogated the witnesses over their recollection of the rescue. He got Benzin-Brinks to admit that she does not inform women who come to the facility about Gordon’s past health violations. One police officer also admitted to Muise that she arrested one of the activists without having given her a direct prior warning that she would do so.

Muise further, and more importantly, argued that the city’s “trespassing” law had not been violated due to the way the city defines the term. He proved, with video evidence and testimony from Miller, that the rescuers never entered the abortion facility nor returned to the parking lot of the clinic after receiving their citations from police.

Miller told LifeSiteNews that the jury likely took issue with elements of Benzin-Brinks’ testimony as well as with the jurisdiction of the police. “Even the jurors sent a question to the judge on that specific issue: were the police officers ‘agents’ of the abortion clinic that they would have the authority to act on behalf of the clinic, telling us and warning us to leave? The answer to that question was, no!” she said. “We were also able to show the police and Benzin-Brinks did not warn us prior to arrest. Ergo, not guilty!”

In an email announcement sent out before the trial, Miller noted that Judge Faber allowed jurors to be asked their position on abortion, and whether their position would cause them to not be impartial in rendering a verdict. Miller said that two of the jurors were in fact against abortion but that they ended up being selected for the jury anyway.

If convicted, Miller and her colleagues could have been sentenced to a maximum of 30 days in jail and a fine of $500 with probation.

Since 2017, there have been close to 20 Red Rose Rescues in the United States. Legally, they have resulted in charges being dropped a number of times, notably in federal court; others have ended in trespassing convictions. The state of Michigan has treated rescuers the most harshly, jailing pro-lifers and even charging four involved in a 2019 rescue with a felony for obstruction of officers. Michigan’s current attorney general is a lesbian in a same-sex “marriage.”