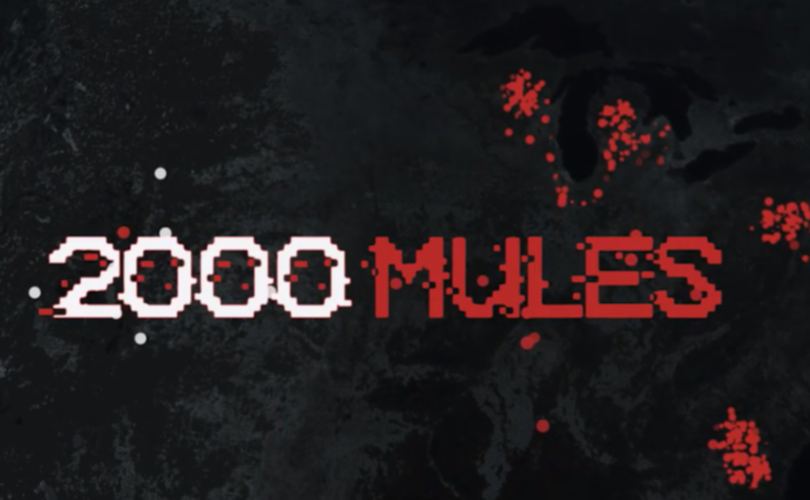 (WND News Center) – Allegations arising from the True the Vote investigation featured in the documentary “2000 Mules” have prompted a call by Michigan Republican lawmakers for a new investigation into the 2020 election.

Meanwhile, the Republican Party in Spokane County, Washington, is calling for a 2020 election probe, and a case in Delaware County, Pennsylvania, has been assigned a judge, reports Just the News.

Earlier this month, an Arizona election worker said the sheriff’s office in Yuma County is conducting an investigation into the 2020 election that targets non-profit groups operating nationwide that are believed to be at the center of what True the Vote described as a ballot-trafficking operation.

Previously, a former mayor in Yuma County was charged in an alleged ballot-trafficking scheme that was uncovered in the True the Vote investigation.

The True the Vote investigators used cellphone location data and surveillance video to uncover what they allege is a highly coordinated operation in key battleground states carried out by left-wing groups that collected mail-in ballots and paid “mules” to stuff them in unattended drop boxes, typically in the middle of the night.

The Republican members of the Michigan House of Representatives urged Attorney General Dana Nessel in a letter “to investigate, and bring charges if credible evidence is found, the Secretary of State of Michigan, members of her office, and any organizations or individuals for crimes related to fraud committed in the 2020 election and crimes brought to light in the documentary 2000 Mules.”

The lawmakers want a probe of Secretary of State Jocelyn Benson for using “4.5 million dollars of CARES funds to recklessly mail absentee ballot applications to all registered voters not on the permanent absentee voter list,” ordering “Michigan clerks in October 2020 to presume the accuracy of absentee ballot signatures … in contrast to state law, and not responding to Freedom of Information Act (FOIA) requests by voters and groups like the Michigan Grassroots Alliance related to the voter rolls, Canton Township’s voters, and City of Detroit ballots.”

The state representatives noted that in “2000 Mules,” Michigan “was named as a state that had such mules influence the 2020 Presidential Election.”

They also want a probe of the influence of the Mark Zuckerberg-funded Center for Tech and Civic Life in Michigan cities. Some $7.6 million dollars was distributed among 19 municipalities in 474 grants, they noted, which was the most to any state in the nation.

Hawkins wants the comprehensive inspection to include the software and hardware of tabulation machines and procedures for ballot distribution and collection.

In Delaware County, Pennsylvania, former Pennsylvania Secretary of State Kathy Boockvar and 2020 election voting machine warehouse supervisor James Savage have been named in a lawsuit alleging election fraud and destruction of evidence in the 2020 election, The Epoch Times reported.

The lawsuit states: “Defendants intentionally and fraudulently conspired to and did destroy, delete, secrete, and hide November 3, 2020, election data, materials, and equipment to prevent discovery of election fraud and election law violations in Delaware County, which the Defendants also conspired to commit and did commit while carrying out the November 3, 2020 election.”

The Epoch Times said Judge John Whelan of the Delaware Court of Common Pleas was assigned to hear the case last week.