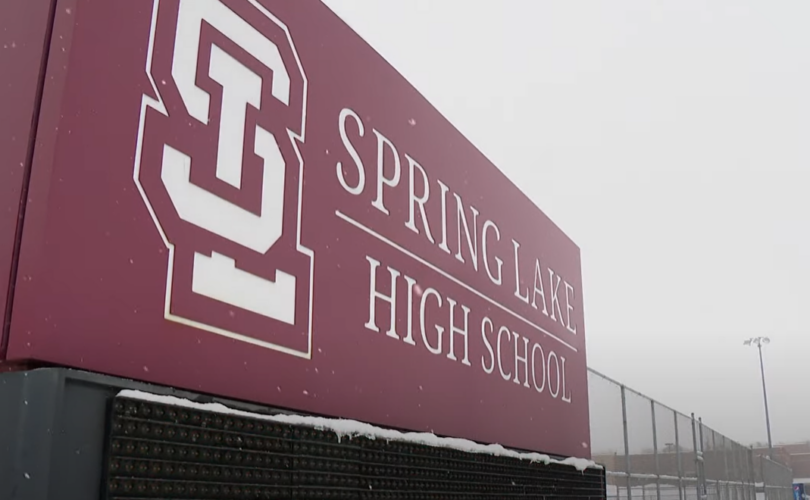 Spring Lake High School in Spring Lake, Michigan13 On Your Side / YouTube

SPRING LAKE, Michigan (LifeSiteNews) — A Michigan school board recently voted to severely restrict access to a graphic novel that contains explicit depictions of homosexual acts and pedophilia from the district’s high school library after a parent complained about the book’s presence.

The Spring Lake School Board voted in a 4-3 decision Monday to severely restrict students’ access to Maia Kabebe’s graphic novel Gender Queer, which contains graphic depictions of gay sex, including between a man and a boy. The book, which was in the high school library, had not been checked out before complaints were made about it earlier this year, school board president Jennifer Nicles noted to Michigan Live.

While the now-passed proposal – which was introduced by board member Christopher Beck – removes Gender Queer from the high school’s library, it still allows students to obtain access to the book provided they have been granted “consent” from their parents, in addition to either a social worker, school counsellor or psychologist.

Beck argued that a complete ban of the book could lead to a “slippery slope” of banning books and that the exception would serve as a compromise.

The board, in making its decision, also noted that members’ objections to the book were not that it discussed gender theory or homosexuality, but that it contained graphic depictions of sexual activity.

“I’m a father and I have young children in my house and I have to admit, the visual graphics are difficult for me,” said Beck. “I asked myself, if I put this on my dining room table and open it to a certain page, would I feel comfortable with that?”

Nicles also noted her discomfort with Gender Queer’s content, describing her experience reviewing the book at her house with her son in the other room.

“I’m sitting by my office, with my screen and the pictures are there,” she said. “My son is home with me. And he’s 12. And I asked him, buddy, just give me a minute in the office, I really don’t want you to walk in right now.”

“The pictures were uncomfortable … I did not like them. I do understand people’s concern as to what those pictures are. I also understand the importance of the book itself. I’m torn. I see good, and I see reservations,” Nicles added.

Speaking in favor of the explicit book marketed to minors, board member Katie Pigott argued that those opposed to the book were taking its sexual content out of context, saying “A book cannot be evaluated on its parts, only as a whole … Here’s the mistake some of our community has made – spreading screenshots around social media and community settings as if this was telling the whole story.”

“Our children are watching and listening,” Pigott continued. “The truth is, our LGBTQ+ students may be fighting and struggling for much of their lives. They need these books like they need oxygen – especially given the notable scarcity of our role models in this community. But more than that, they need our affirmation – especially right now.”

The board meeting was called in response to an appeal made to a decision the district’s Material Review Committee made in May, which rejected a complaint made by a school parent about the book’s presence in the high school library.

District superintendent Dennis Furton, who with the high school principal selects the members of the committee, sent a letter to parents last Friday explaining the committee’s initial rejection of the complaint. According to Furton, keeping the book in the school library “served a greater interest (combating isolation, affirming a child’s reality) than restricting access or removing the book altogether.”

While the final decision of the committee is made by the superintendent, if a parent appeals the committee’s decision, the school board must vote whether to keep the material or not.

While the parent who issued the complaint chose not to be identified, he explained his reasons behind the complaint after the school board voted in favor of restricting the book.

“My objection to some of the content in this book has nothing to do with the LGBTQ+ theme,” the parent stated. “My request to remove the book is due to the mature sexual content of the graphic novel and its images of nude individuals engaged in sexual acts.”

The board allowed those in favor of the book to speak once the parent finished his remarks, and then moved to debate the matter.

However, those opposed to Gender Queer complained that their opinion was not being taken into account as the public comment section was moved to after the board’s vote, and shouts of “vote them out” could be heard throughout the meeting. Current district policy allows only for the parent who issued the complaint to speak against an offending book, the local Grand Haven Tribune reported.

During the comment period, the first speaker, who advocated for a complete ban of Gender Queer, spoke over the board’s three minute time limit, which prompted Furton to take the microphone away from her.

The board initiated a break in the discussion after another parent attempted to talk without the microphone, but ended the meeting after the brief recess. Nicles told the Daily Beast that parents both in support of and against Gender Queer refused to follow the board’s rules during the public comment period.

Last week, Becki Deater, a parent from Spring Lake School District, told WOOD that while the May complaint was about Gender Queer, there were other sexually explicit books in the school library.

Sexually explicit books making their way into the hands of children has been a growing concern among American parents, particularly since the rise of the LGBT movement.

Earlier this month in the largely Muslim-populated city of Dearborn, Michigan, parents held a rally urging the local school district to ban radical gender theory and sexually explicit material from its schools.

Parents in Dearborn, Michigan, are holding a mass rally to get radical gender theory out of their schools.

“We as parents … are responsible for our children. The progressive dogma … will not indoctrinate our children.”pic.twitter.com/h4EZDzrxfT

According to journalist Christopher Rufo, “Parents were outraged when they discovered that the local school district had promoted a book that teaches children the ‘ins and outs of gay sex’ and ‘how sex apps work.’

Parents were outraged when they discovered that the local school district had promoted a book that teaches children the “ins and outs of gay sex” and “how sex apps work.” pic.twitter.com/QyI6MlCRWS

Last year in Pennsylvania, two school board members made headlines for publicly condemning the fact that one of the schools under the board’s purview placed pro-LGBT books on display in the library for children to read, as part of “pride month.”

Following the controversies caused by books such as Gender Queer, a wave of Republican electoral victories have begun to sweep the nation, as more parents become aware of the true nature of gender ideology, critical race theory and other school policies they deem harmful to children.