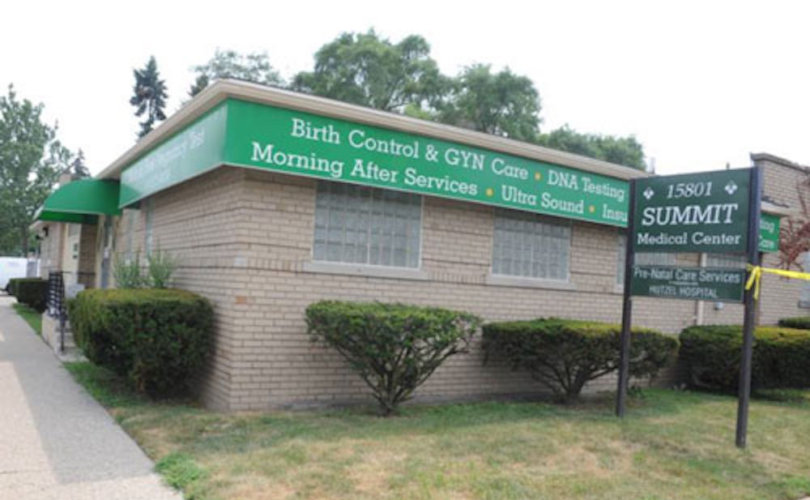 DETROIT, April 8, 2016 (LifeSiteNews) – The attorney general of Michigan has moved to close an abortion facility “illegally operating” in Detroit and charge its owner tens of thousands of dollars in fines for fraud.

On Thursday Bill Schuette, a Republican, filed a complaint for quo warranto against Summit Women’s Center for pretending it is led by a registered physician.

Summit performs abortions through the full second-trimester, up to 24 weeks. Under state law, facilities such as Summit much be owned by “licensed professionals.”

But pro-life investigators and Schuette say the owner of Summit skirted state law by misleading state officials about who owned the corporation and about holding an appropriate license.

Schuette said he first received complaints “in late 2013,” but Summit replied that its services were offered through Summit Professional Corporation (Summit, P.C.), which was incorporated by “licensed physician Alex Pickens, Jr., MD.”

That satisfied the AG's office, which closed the complaints against the facility, located at 15801 W. McNichols Rd.

However, “in May 2015, Summit P.C. filed new paperwork with the state falsely certifying that David Lipton was a licensed professional and otherwise ignoring state law governing professional corporations.”

“Ever since, Summit P.C. has been operating illegally, leading to the present complaint,” the AG's office says.

Pro-life researcher Lynn Mills caught this, and she and Monica Miller of Citizens for a Pro-Life Society filed new complaints in June and December 2015.

“Citizens for a Pro-Life Society, thanks to the investigative work of Lynn Mills of pro-Life Detroit, contacted the Michigan Attorney General's Office and notified them that the Summit Medical Services abortion clinic in Detroit was operating illegally,” Miller told LifeSiteNews.

Their statements were strengthened by the fact that Dr. Pickens did not claim ownership of the facility when he filed for bankruptcy, according to the state office.

“Pickens’ failure to disclose his ownership of Summit P.C. to the bankruptcy court, and the subsequent filing of ownership by David Lipton, suggests that Alex Pickens, Jr., MD may never have been the true owner of Summit P.C. and that Summit P.C. was organized through fraud and repeatedly and willfully exceeded its authority,” the attorney general's legal complaint states.

He also hopes to fine Lipton and his co-defendants “up to $10,000 each for misuse of their corporate rights, privileges, and franchises.”

Miller, whose husband prayed and acted as a sidewalk counselor outside the facility for years, says AG Schuette's lawsuit proves that pro-life action gets results.

“This shows the importance of keeping tabs on abortion facilities and then the importance of following through with government agencies that have the power to do something. It took a lot of phone calls – but our pro-life attorney general Bill Schutte came through!” she said.

“We now pray that the attorney general's action against the clinic will cause it to be shut down forever,” she told LifeSiteNews.