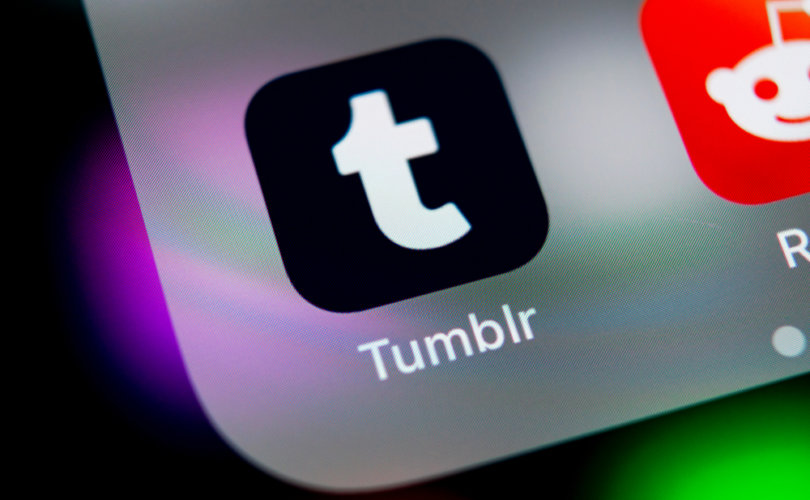 December 6, 2018 (LifeSiteNews) – A major microblogging and social networking site has announced it will delete all “adult content” – pornography – on its platform.

Tumblr, which is owned by Verizon, is saying goodbye to “sexual content and nudity” for good, just a few weeks after finding child pornography had made its way onto the platform despite filters meant to prevent such occurrences. Apple’s App store quickly dumped Tumblr after the discovery.

“Photos, videos, or GIFs that show real-life human genitals or female-presenting nipples, and any content—including photos, videos, GIFs and illustrations—that depicts sex acts” are now banned, according to a statement issued by Tumblr.

Exceptions will be made for classical statues, nudity found in art, as well as “birth or after-birth moments, and health-related situations, such as post-mastectomy.” There will also be an exception for “gender confirmation surgery” photos.

“It is our continued, humble aspiration that Tumblr be a safe place for creative expression, self-discovery, and a deep sense of community,” wrote Tumblr CEO Jeff D’Onofrio in a separate statement. “As Tumblr continues to grow and evolve, and our understanding of our impact on our world becomes clearer, we have a responsibility to consider that impact across different age groups, demographics, cultures, and mindsets. We spent considerable time weighing the pros and cons of expression in the community that includes adult content. In doing so, it became clear that without this content we have the opportunity to create a place where more people feel comfortable expressing themselves.”

“Bottom line: There are no shortage of sites on the internet that feature adult content,” said D’Onofrio. “We will leave it to them and focus our efforts on creating the most welcoming environment possible for our community.”

The new policy, which goes into effect on December 17, has been roundly criticized by some disgruntled Tumblr users.

“For those that use its site legally, the decision to ban adult content across its entire network is seen as a reluctance to tackle the issues properly,” wrote Dave Lee in a BBC commentary. “Tumblr has decided to give up, rather than do as other sites have done and invest in measures to handle illegal content, while allowing sexual expression.”

“Unlike typical pornography sites, which overwhelmingly cater to men, and serve an often narrow definition of what is attractive,” continued Lee, “Tumblr has been a home for something else – content tailored at vibrant LGBT communities, or for those with tastes you might not necessarily share with all your friends.”

The LGBT world seemed to take the announcement particularly hard.

“The surprise announcement met with shock, anger and amusement across much of social media,” according to GayStarNews. “Some predict the site will see a massive downturn in traffic. Others have already announced they are closing their Tumblr pages. Some say they will instead post to Twitter, which continues to allow NSFW [not safe for work] content.”

Another LGBT-oriented site, The Advocate, went further, pointing out that many are worried that “the new guidelines would lead to a targeted erasure of LGBTQ content.”

“They are trying to disappear us,” tweeted LGBTQ activist Anthony Oliveira, which The Advocate says alludes “to the larger trend of queer erasure happening at the behest of the Trump administration.”

Tumblr was one of the few vectors for grassroots queer art and banning “adult content” will disproportionally stunt and hamstring those artists, so of course that is happening in 2018

they are trying to disappear us; live in defiance.

“Erasure” seems to be a common concern in the Twitterverse.

“The looming question I have in light of Tumblr's new ban on adult content is how long until they declare anything queer to be ‘adult content’ by default?” wondered Crystal Frasier.

The looming question I have in light of Tumblr's new ban on adult content is how long until they declare anything queer to be “adult content” by default?https://t.co/eKIdo51JyW“

“Queer kids, trans kids, abused kids, kids who doesn't [sic] have trustable adults to talk to – they need to learn about their bodies,” continued Moon. “Teaching kids critical thinking + how to access good info is required for a healthy society. Sex bans prevent that.”

Another observer predicted the end is near for Tumblr: “RIP Tumblr. 2007 – 15 minutes after this change is enacted.”