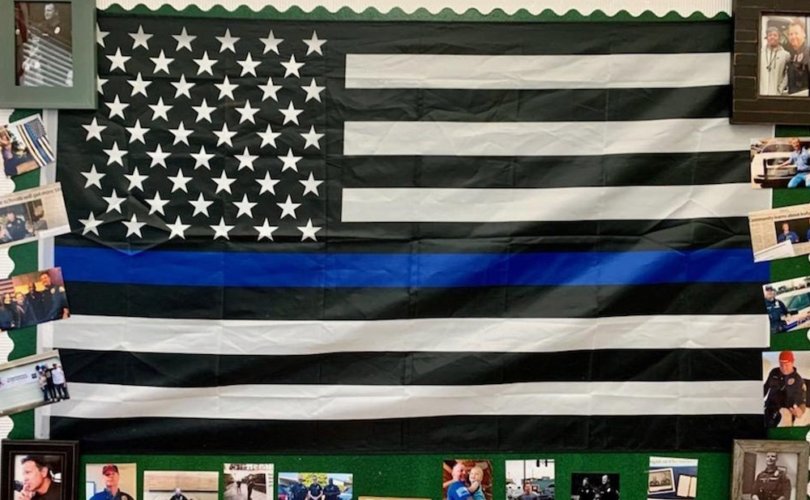 MARYSVILLE, Washington (LifeSiteNews) – Promoting the LGBT agenda in the classroom is acceptable but expressing support for police officers is not, according to a Washington state middle school who recently threatened a teacher with disciplinary action.

An assistant principal at the school first approached the teacher about a “Thin Blue Line” sticker on her laptop, meant to express support for her brother’s dangerous job, with “concerns about how students, families, and community members might interpret what the image is intending to communicate” and how “this interpretation may cause a disruption to the learning environment,” according to an HR document reviewed by Rantz.

Concerns about the sticker soon took a backseat, however, after the teacher put up a “Thin Blue Line” flag, bordered with photos of her brother, in her classroom. Another principal told her to take down the flag, and an HR representative for the school district notified her that it was “highly concerned about the impact of this political symbol on students, staff, and families of Marysville Middle School,’ and warning her of “further disciplinary action” unless she “refrain[ed] from using the ‘Thin Blue Line Flag’ symbol” in the school.

The teacher complied but wrote the district a response explaining that it had put her through “the most traumatic and hostile” experience of her tenure at MMS.

“It’s hurtful because I can hear in her voice how much it actually hurts her being told to [take down the flag],” Sutherland told Rantz.

“So when [she] and I talk about it, back and forth, it’s frustrating because I know how much she cares and how much this means to her. For her to have to go through that … it’s just not fair.”

“While it might be viewed by some as a tribute to police, this symbol was also used by hate groups in the 2017 far-right rally in Charlottesville, and was also carried by rioters during the January 6th attacks on the US Capital [sic],” Pearson stated.

“Therefore, without any educational context or purpose, the display of this symbol in a school classroom cannot be reasonably divorced from the political meanings that have been attached to its varied uses and, as a result, may send a mixed or even disruptive message to staff, students and families.”

Notably, despite linking pro-police sentiment to hatred and violence, Pearson claimed the district has a “strong and positive” relationship with the Marysville Police Department.

During his interview with Rantz, Sutherland noted that the district allows teachers to display LGBT “pride” flags in classrooms, as well as flags promoting Black Lives Matter (BLM), the far-left group associated with violent riots across the United States last year. BLM has praised the authoritarian government of Cuba for granting asylum to convicted cop-killer Assata Shakur.

Pearson attempted to justify this apparent double-standard in the letter, writing that BLM and LGBT symbols “can be seen as having a specific educational purpose that is directly aligned with instructional objectives or extracurricular programs. For example, our students participate in several different extracurricular leadership activities, including our Black Student Union, Latino Student Union, LGBTQIA+ Club, to name a few. In these cases, these symbols, or others like them, can be appropriate in a school setting.”

This incident comes amid a nationwide revolt against the intrusion of critical race theory (CRT) in public schools. CRT asserts that “race is not a natural, biologically grounded feature of physically distinct subgroups of human beings but a socially constructed (culturally invented) category that is used to oppress and exploit people of color”; and that the “law and legal institutions in the United States are inherently racist insofar as they function to create and maintain social, economic, and political inequalities between whites and nonwhites, especially African Americans.”

Conservatives argue that such teachings, which align with BLM’s claims about America and hostility to police, stoke racial divisions rather than heal them. While former President Donald Trump worked to remove CRT from federal training programs and publicly advocated its removal from public education, one of President Joe Biden’s first acts was to dismantle Trump’s 1776 Commission, which called for educational curricula focused on teaching students to understand and embrace the founding principles of the United States.