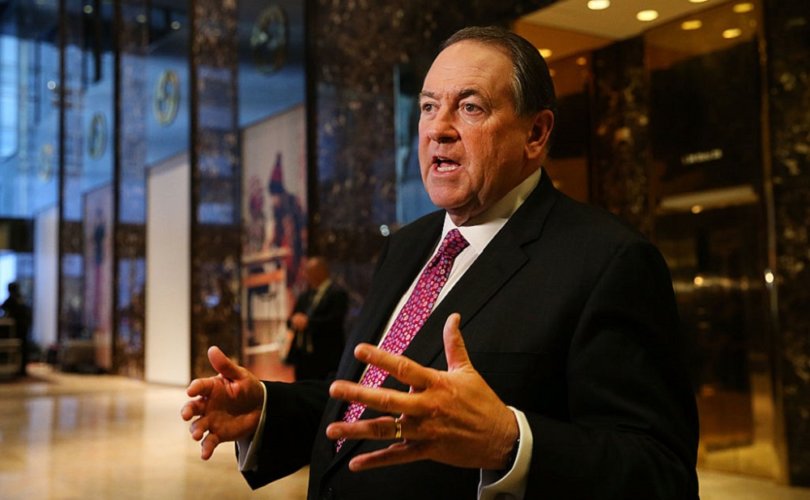 July 8, 2020 (LifeSiteNews) — Former Arkansas governor Mike Huckabee has emphasized that racism is fundamentally a spiritual problem, clarifying that racism essentially means “disrespecting God and the people that he made who are equal to me.” He also said people have put themselves in the place of God.

“We’ve systematically given in to selfishness and everyone becoming his or her own god,” Huckabee pointed out. “That’s really the fundamental problem. I know that sounds like some religious overstatement, but when people don’t accept that there is a God who makes the rules, and we start making our own and we make ourselves god, being the centerpiece of our own lives, and we’re our own God — yeah, we get in trouble.”

“If I really have a good relationship with God and I love him, I can’t help but love the people that he made,” he explained. “And some of them are black and some of them have white in their color and some are Asian and they’re all kinds of people. But he made them all and he didn’t make any of them to be less important than me.”

During his conversation with Jeanine Pirro of Fox News, the former governor of Arkansas pointed out that as soon as “I’ve got a problem with somebody of a different race, my problem is with God.”

Huckabee admitted that “we’ve got all these people arguing over politics and race and economics and sociology,” but for him, these issues are not the answer. “The real problem is spiritual. And that’s where I feel like we are failing in this debate, because we think we can resolve it by electing a certain politician.”

Pirro, a practicing Catholic, asked Huckabee how his argument would work, given that a large number of Americans don’t believe in God.

“The fact is, we have law precisely for that reason,” he responded. “Every law we have is because somebody has not obeyed the basic law, which is: Love your neighbor as yourself. Do unto others as you would have them do unto you.”

He added that when a society does not live by these basic laws, “we have to define it more and more and more and more, to the place where people understand it. We have lots of laws on the books, but if you ask yourself what do they really say, it gets down to this simple thing: Do unto others [as] you should have them do unto you.”

“We can’t force people to believe in God,” Huckabee emphasized, “but we do have to accept that our founders understood that and they believed that our basic fundamental rights of liberty did not come from the government. It came from God, and it was the government’s job simply to protect what God had given.”

He recounted how faith has slowly been removed from public life over the last decades.

“We’ve taken prayer out of school. We’ve said you can’t read the Bible, you can’t put faith things in the middle of the public square,” Huckabee said. “And as we have systematically done that over the past, really 60, 70 years, we’re paying the price for it, because now, we have people who are raising their kids to believe that everybody gets a trophy, nobody’s ever wrong, nobody ever loses, because we’re all our own god.”

According to Huckabee, “that craziness has resulted in what we’re seeing unfold on our eets

In a previous Fox News segment, he had slammed left-wing Black Lives Matter activist Shaun King for his call to destroy representations of Jesus Christ and Our Lady, following the destruction of statues, including statues of saints, all across America.

“To somehow hate Jesus is to hate the one person in the entire history of the planet who lived the perfection of God, because he was God in human flesh,” said Huckabee. “To say that in any way Jesus is a symbol of white anything is absurd. In part because Jesus wasn’t a white guy, he was a Middle Easterner, and probably had more olive skin than he did white skin.”

“It has to be one of the most unbelievable things I’ve ever heard,” he continued. “First of all, if someone would study Jesus, they would find that he was the ultimate person who loved the unlovable, who cared for the ones that no one else cared for.”

Mike Huckabee began his career as a Protestant pastor, before becoming lieutenant governor of Arkansas in 1993 and governor in 1996. He ran for president in 2008, winning the Iowa Republican caucuses, and again in 2016, less successfully. He now hosts his own show on the Trinity Broadcasting Network.