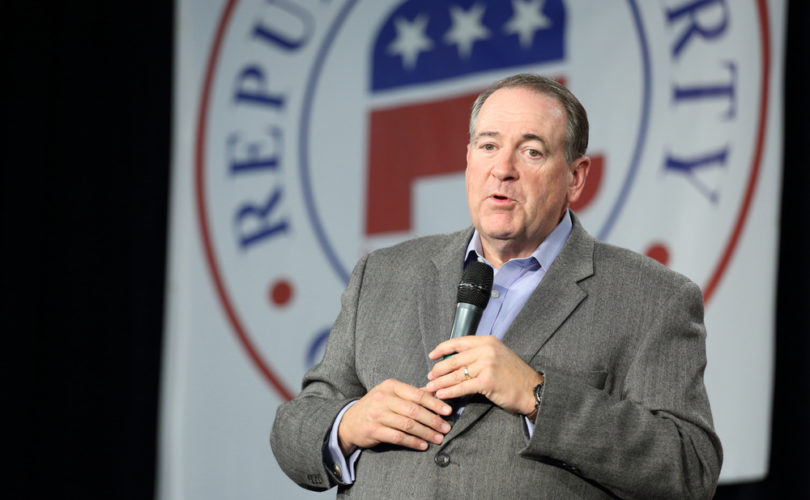 Huckabee, who shocked the political world by breaking the existing record for most votes ever received in the caucus during his upset 2008 victory over John McCain, finished ninth last night.

Early in the evening, he announced his withdrawal via Twitter:

I am officially suspending my campaign. Thank you for all your loyal support. #ImWithHucK

“I have suspended my campaign, but not my desire to see America protect all human life, reward those who work hard, and give our veterans and seniors what they have paid the price to earn,” he said in a subsequent statement.

During the campaign, Huckabee proposed a “bolder” plan to end abortion by recognizing an unborn child's “unborn child’s Fifth and 14th Amendment rights for due process and equal protection under the law.”

The three top-finishers saluted Huckabee during their speeches last night, with Donald Trump noting that the former governor had “become a really good friend of mine.”

Huckabee dismissed rumors that he is about to endorse Trump, after appearing with him alongside Rick Santorum at Trump's fundraiser for veterans last week.

“Rumors abound that I’m getting ready to endorse someone, but those rumors are totally untrue,” he said. “While I may eventually support one of the candidates, right now I have a lot of things to do,” including “trying to figure out my next chapter of life, and spending some time with my dogs who probably wonder if I had abandoned them.”

After his congenial manner helped launch Huckabee into the top tier of candidates in 2008, he hosted a long-running, eponymous television show on Fox News until last January, shortly before announcing his candidacy for president.

Huckabee was one of two candidates to drop out of the race last night. Former Maryland Gov. Martin O'Malley suspended his campaign for the Democratic presidential nomination after coming in a distant third.

We live in the greatest country on earth and I ran for President because I wanted to make it better for my 5 grandkids. I have no regrets about the effort because it’s never our responsibility to determine the results, but to be faithful to the task before us. I have suspended my campaign, but not my desire to see America protect all human life, reward those who work hard, and give our veterans and seniors what they have paid the price to earn.

I am blessed with an incredibly supportive wife and family who never wavered in their confidence in me. Our campaign staff was amazing—they gave it their all with competence, compassion, and a spirit of teamwork that I will forever cherish. Our effort didn’t fall short due to lack of effort and expertise from our team. And our volunteers every day were stunning and beyond belief in their efforts. On days when I was exhausted and getting hammered by polls, idiotic media questions, or long car rides, I would read a post on FB from one of our supporters or get a letter from a donor that gave me fresh energy and determination.

While I truly wish the results were different, I would rather lose with honor than win without it. Thank you so much for your prayers, your sacrifices of time and money, and your tireless efforts for our campaign.

Rumors abound that I’m getting ready to endorse someone, but those rumors are totally untrue. While I may eventually support one of the candidates, right now I have a lot of things to do in wrapping up the loose ends of the campaign, trying to figure out my next chapter of life, and spending some time with my dogs who probably wonder if I had abandoned them. (I haven’t!)

I love you guys, and want to stay in touch. I am eternally grateful for you!

With gratitude and great respect,

Mike Huckabee: Can God bless America if ‘we continue to slaughter 4,000 babies a day?’ (VIDEO)

Huckabee on 10-year-old pregnant rape victim: Abortion would only compound the tragedy