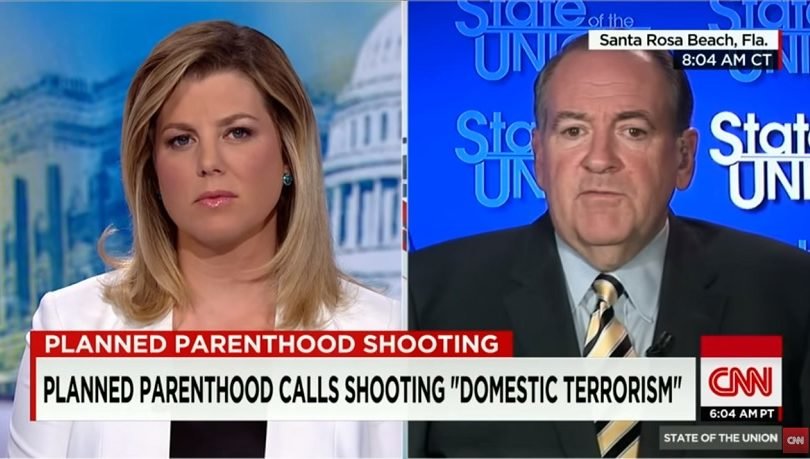 COLORADO SPRINGS, Colorado, November 30, 2015 (LifeSiteNews) – Violence is wrong, whether it is three people gunned down by a deranged man inside a Planned Parenthood or “millions of babies” killed by Planned Parenthood facilities nationwide, presidential candidate Mike Huckabee has said.

The Arkansas governor was careful to say “we don't know fully what the facts are” about Robert Lewis Dear's stand-off in a Colorado Springs Planned Parenthood last Friday. “But regardless of why he did it, what he did is domestic terrorism.”

Huckabee, who won the 2008 Iowa caucus, called the shooting “absolutely abominable, especially to those of us in the pro-life movement, because there's nothing about any of us that would condone or in any way look the other way at something like this.”

According to its latest annual report, Planned Parenthood performed 327,653 abortions between June 2013 and June 2014. The nation's leading abortion provider, has seen its share of the nation's abortion industry rise even as its non-abortion services have declined.

Planned Parenthood other abortion supporters promptly blamed the shooting on pro-life rhetoric and an expose of its program to receive remuneration for harvesting aborted fetal tissue and organs for scientific researchers.

“I don't know of anybody who has suggested violence toward Planned Parenthood personnel or some act of violence toward their clinics,” Huckabee responded. “I have not heard that, not from one single pro-life person.”

Dear was not known to Colorado pro-life advocates and, according to neighbors who lived near his North Carolina cabin, never spoke about abortion.

Huckabee contrasted the pro-life condemnation to comments made by Secretary of State John Kerry about the Islamic terrorist attack on the French magazine “Charlie Hebdo,” attacks Kerry implied were not senseless because they had “a rationale.”

Huckabee's presidential rival, Ted Cruz, calls Dear a “murderer” but declined to call it an act of terrorism, saying that Dear's motivation was not yet known.

After Gov. Huckabee condemned the violence that left nine people wounded, Keilar asked the pro-life candidate, “Can you explain under your plan what the criminal penalty would be for a woman if she did get an abortion?”

“There wouldn't be a criminal penalty against a woman,” he replied.

“I have often said, Brianna, that there are two victims with every abortion. One is the unborn child who loses its life, and the other is often that woman who is talked into the abortion, pressured into it, maybe feels she has no other option,” he said.

A meta-analysis published in the PLOS Medicine in 2014 found that one-in-four women who seeks an abortion worldwide had been abused. Numerous studies show that many women suffer post-abortion trauma.

Ministries such as Silent No More and Rachel's Vineyard help mothers cope with the effects of abortion.

“There's no reason to criminalize” the post-abortive mother, Gov. Huckabee said. “I personally think that that would be a useless and, frankly, a harsh and unnecessary kind of attack on a woman who needs love and support and assistance, not criminalization.”

Mike Huckabee: Striking down heartbeat bill was ‘immoral’ and ‘unconstitutional’

Huckabee on 10-year-old pregnant rape victim: Abortion would only compound the tragedy