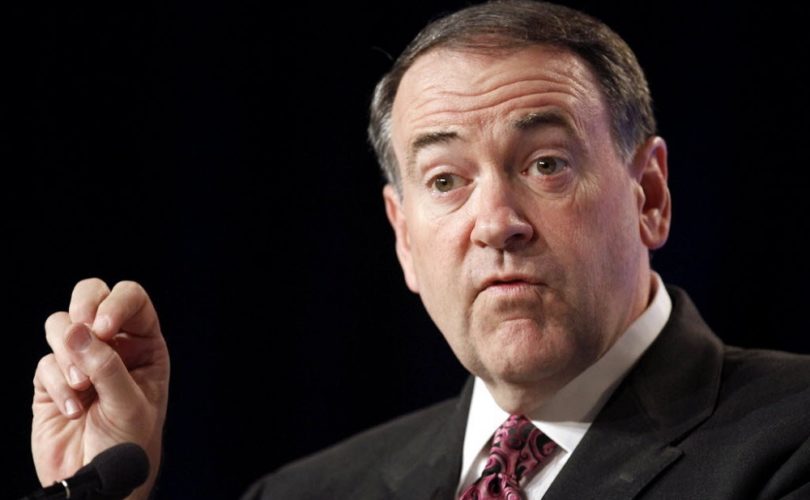 When confronted by an antagonist trying to make a scene at a campaign Q&A session, Governor Huckabee stated flatly, “I think the ultimate form of child abuse in this country is abortion.”

Leading a “Huckabee Huddle” session with voters at a local diner in Clinton, the campaigner was confronted by an angry woman who accused him of supporting child abuse. The woman cited Huckabee's support for the Duggar family, whose son admitted that as a 14-year-old he touched his sisters inappropriately while they were sleeping.

“What is your view of child abuse?” the antagonist asked Huckabee. “I don't know of anybody who is for it,” Huckabee responded. “I think it's an abominable practice –anyone who would abuse a child. I think the ultimate form of child abuse in this country is abortion. It's the most irreversible form of child abuse. But the abuse of any child, regardless of what age, is an unacceptable –”

“How come you support it?” the antagonist asked Huckabee, referring to child abuse. “You support it on your websites. When the Duggars came out, and their son had molested their child, you more or less said that you felt sorry for the parents.”

The woman continued her tirade until Huckabee said, “Ma'am, I'm sorry. Let me stop you, because you're accusing me of supporting child abuse.”

Despite the woman continuing to argue, Huckabee explained, “I never supported anything that happened to those daughters.” He repeatedly asked the woman to let him finish, but she would not stop accusing him of supporting child abuse.

Over the antagonist's voice, Huckabee pointed out, “Those daughters were maliciously and savagely abused not just by their brother, but by the news media, who exploited them for their own purpose, without regard for what it was doing to those young ladies.”

Finally, Huckabee made a point that momentarily stopped the woman's tirade. “You don't know what those parents did and how they worked to try to take care of their entire family,” Huckabee said. “You come in here to confront me, which is fine, but you cannot abuse … the reputation of a godly family, who has been through Hell because a son of theirs … did something evil and sinful that nobody is backing up and supporting.”

Huckabee summarized, “I would support any family who tries to work through their problems under the grace of God.” The event attendees in the diner applauded Huckabee's calm but firm answer.

Huckabee then took a shot at the media and others who slander out of ignorance. “Some people believe that if a person has a problem in their family, that somehow they're fair game to be criticized, without people knowing what the heck they're talking about,” Huckabee said. “So I'm going to ask you to stop talking about [the Duggars] unless you personally know them.”

“I know the Duggars,” Huckabee said. “You do not know who you're talking about, ma'am. You do not.”

The woman would not stop, but she did finally pause long enough for Huckabee to say, “I'm glad you came. You got what you wanted. You wanted to come make a scene; you've done it. We're finished with you. … You can either stay and be quiet or leave.”

By this time, the crowd at the diner spoke over the woman's continued accusations, with one woman telling the antagonist, “That's enough.” Huckabee turned to ask if anyone else had questions, and the woman – very vocally – left.

In 2015, when Josh Duggar's adolescent sexual abuse became known, Huckabee stood by the family. “No one needs to defend Josh's actions as a teenager, but … he confessed his sins to those he harmed [and] sought help,” Huckabee wrote on Facebook. “Josh's actions when he was an underage teen are as he described them himself, 'inexcusable,' but that doesn't mean 'unforgivable.'”