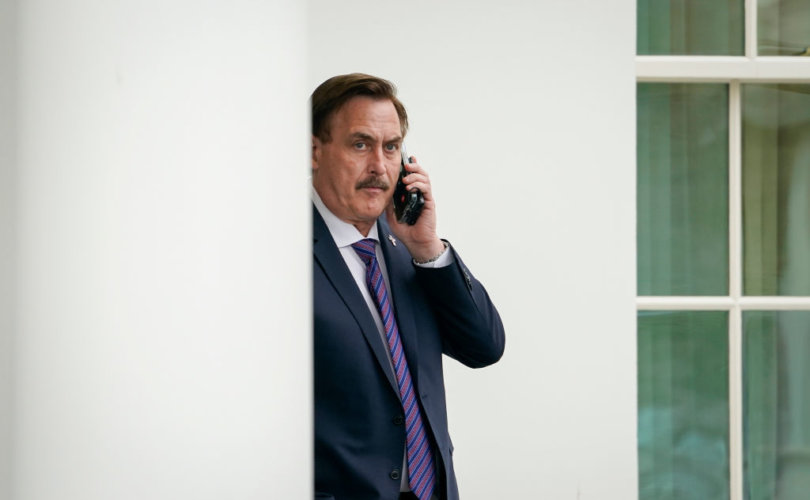 (LifeSiteNews) — MyPillow CEO Mike Lindell, whose vocal support for former president Donald Trump has frequently put him in the crosshairs of the mainstream media and left-wing politicos, said Monday that two banks want to cancel his accounts, citing “reputation risk” after the January 6 committee issued a subpoena for Lindell’s phone records.

The news came shortly after popular Irish conservative commentator Dave Cullen, who has frequently created videos criticizing the COVID-19 response, among other political and cultural issues, reported that PayPal had terminated his account for alleged violations of their “acceptable use policy.”

The incidents raise concern about the potential for banks, corporations, and government actors in western nations to shut down access to personal financial resources for political reasons, a practice already carried out by totalitarian regimes like the Chinese Communist Party (CCP).

“There’s something behind this, and we can’t let everyone get de-banked in our country,” Lindell said in an interview with Business Insider, arguing that the moves by the banks were an example of “cancel culture” motivated by politics.

According to Lindell, Minnesota Bank & Trust and Heartland Financial USA both reached out to him to inform him they wanted to cut off their dealings with the controversial pillow company boss, asking him to close his accounts with their institutions.

The communications from the banks allegedly came after the January 6 House Select Committee — a Democrat-led investigation into the riot at the U.S. Capitol in 2020 which has been described as a political “witch hunt” designed to justify the framing of the disturbance as an attempted coup — issued a subpoena for Lindell’s phone records due to his ties to Trump.

According to recordings of a phone call with a representative from Minnesota Bank & Trust which Lindell shared with Insider, the bank was concerned about negative headlines it might earn if the January 6 Committee decides to broaden its probe to include Lindell’s bank accounts in addition to his phone records.

“But what if somebody came in and said, ‘you know what, we’re gonna subpoena all of his account records, and this and that,’ and we make the news?” the representative said in one of the recordings.

The same representative, whom Lindell identified as Tom Cardle, a senior vice president with Minnesota Bank & Trust, also described a continuing relationship between the banking institution and Lindell as a “reputation risk.”

LifeSite reached out to both Minnesota Bank & Trust and Heartland Financial USA for comment but has yet to hear back.

In the interview, Lindell expressed confusion as to why his banks were looking to end their relationships with him now, when they were silent during previous controversies including when big-box retailers pulled Lindell’s products after the MyPillow CEO publicly promoted the view that the 2020 election was fraudulent.

“Mike Lindell and his charities are being financially deplatformed by his bank,” tweeted conservative journalist and Human Events senior editor Jack Posobiec in response to the news, urging supporters to “Fight back.”

Darren Beattie, a conservative commentator and former Trump aide, also commented on Lindell’s alleged interactions with his banks, arguing that “de-banking is what the United States government does to adversary governments,” and that the banks are seeking to separate themselves from Lindell because he “speaks out against the regime in various ways.”

“It is the domestic recapitulation of economic sanctions,” Beattie continued, asserting that in Lindell’s case, “the government, and its associated institutions,” is “wielding its power domestically against American citizens for political purposes.”

BEATTIE: They are debanking Mike Lindell the same way the US Government using debanking against adversaries pic.twitter.com/w3j61VkeWF

Lindell wasn’t the only conservative personality to experience tangible backlash for his views.

Irish conservative commentator Dave Cullen saw his PayPal account terminated on Monday, cutting him off from a large percentage of his revenue stream.

According to Cullen, the multinational financial technology company informed him he could “no longer do business with” them since he had violated their “acceptable use policy” which he described as being “about as vague as Facebook’s Terms of Service.”

Cullen said PayPal didn’t specify what he did or posted that violated the company’s rules, and said losing the ability to use PayPal has cut him off from about 50% of his income.

“This demonetization thing really kicked off in 2016 with YouTube ads being pulled from videos,” Cullen said, explaining that the moves to demonetize social media creators then expanded over the years to include the closure of Patreon and PayPal accounts.

“And now we’re at a stage where they’ll even go after people’s banks,” he said.

Cullen said he’s looking into other payment service options and plans to appeal PayPal’s decision, but doesn’t expect to get a favorable response from them.

PayPal’s media relations team did not immediately respond to LifeSite’s request for comment.

Meanwhile, Lindell said he has no intention of complying with his banks’ requests to shut down his accounts.

“I’m not closing my accounts,” he told Business Insider. “They’re going to have to throw me out.”