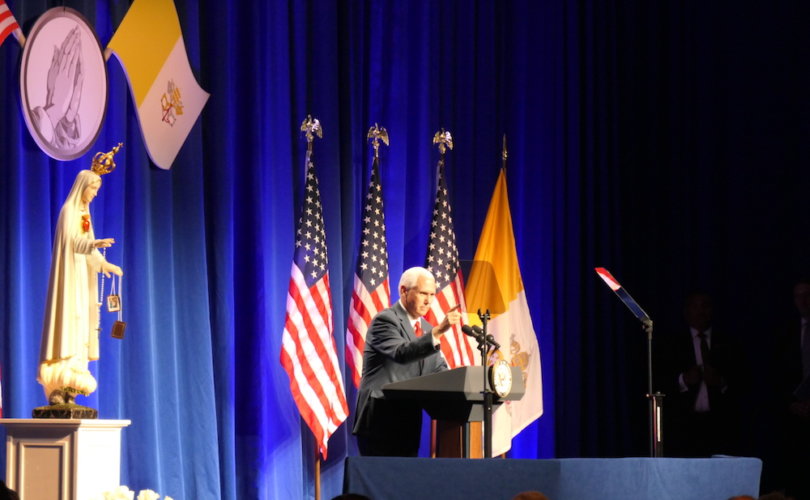 Pence, a former Catholic who now identifies as evangelical, spoke fondly of his Catholic childhood to the annual gathering of diplomats, members of Congress, and Catholic priests and prelates.

I “cherish my Catholic upbringing,” he said. “This honestly feels like coming home. … The hymns and liturgies of the Catholic Church are the anthems of my youth.”

Pence told the crowd that Trump personally asked him to speak at the January 2017 March for Life because Trump was unable to call the March to offer his support.

Trump “stands without apology for the sanctity of human life,” said Pence. “President Trump stands with the most vulnerable: the aged, the infirm, and the unborn.”

The President has “taken action to protect men and woman of faith in the public square,” he said, pointing to his recently-signed Executive Order “to restore religious liberty.”

The Little Sisters of the Poor “took a big stand for faith and freedom” by refusing to betray their consciences and participate in the provision of birth control, Pence said to energetic applause. He said Trump will continue to work to protect religious liberty and that people of faith needn't worry about abandoning their beliefs to participate in public life.

Pence's mention of Trump reinstating the Mexico City Policy prohibiting U.S. tax dollars from funding abortions and abortion advocacy groups abroad drew loud applause. So did Pence touching on his being the tiebreaking vote in passing a law allowing states to defund Planned Parenthood, which Trump then signed.

“American Catholics have an ally in President Donald Trump,” he said.

Pence also praised Project Rachel, an organization that helps women recover after abortion, and the volunteers who work at crisis pregnancy centers.

Pence said ISIS is committing “genocide” against Christians in the Middle East. He thanked the Knights of Columbus for their efforts to fight this and said Trump “stands with those who are persecuted for their faith around the world.”

Pence praised American Catholics like Charles Carroll, the only Catholic signer of the Declaration of Independence.

“Catholicism has made an indelible mark on the American spirit,” he said. He noted that Catholics have served the American military in “every conflict in American history.” Public and military service were themes repeatedly touched on throughout the breakfast. Archbishop Timothy Broglio of the Archdiocese for the Military Services, USA spoke before Pence.

Pence mentioned Trump's recent trip to the Vatican. The president was “deeply honored and moved” for the opportunity to meet with “the Holy Father Pope Francis,” Pence said. “They had a lengthy and meaningful discussion about issues facing our world,” especially the persecution of religious people across the globe.

Toward the end of his speech, Pence appeared to tear up as he described how much he and Trump love meeting people who say that they're praying for them.

God will “heal this land, this one nation under God, indivisible, with liberty and justice for all,” he finished.