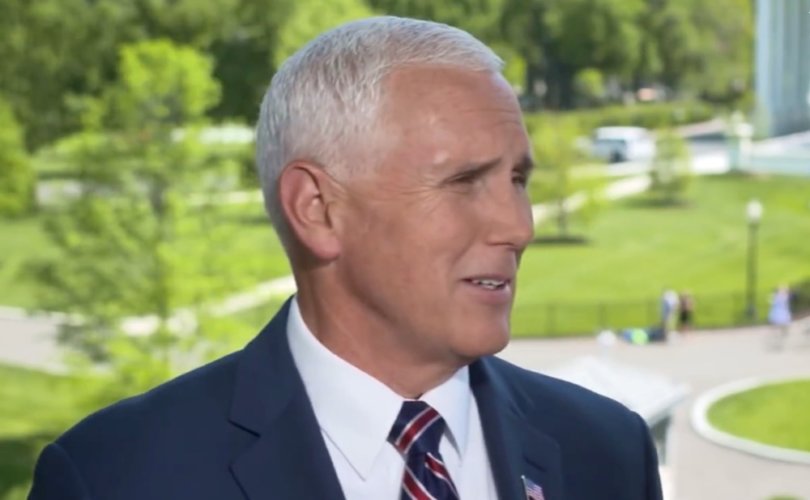 WASHINGTON, D.C., May 4, 2018 (LifeSiteNews) – Pro-life Vice President Mike Pence quoted the Bible when asked about a controversial abortion joke made at his expense during last weekend’s White House Correspondents’ Dinner.

During the annual event, which President Donald Trump has taken the unprecedented step of boycotting twice so far, comedian Michelle Wolf made a variety of insulting remarks about the Trump administration, including a bit about Pence’s pro-life stance.

“He thinks abortion is murder,” Wolf said. “Which, first of all, don't knock it 'til you try it – and when you do try it, really knock it. You know, you've really got to get that baby out of there.” In response to groans and muted laughter from the audience, she continued, “yeah, sure, you can groan all you want. I know a lot of you are very anti-abortion. You know, unless it's the one you got for your secret mistress.”

“I’m pro-life and don’t apologize for it,” the vice president said, and Wolf’s attack “comes with the territory.” He then cited James 1:2, saying “I count it all joy when I endure trials or criticisms.”

Wolf’s performance last Saturday received widespread condemnation from pro-lifers and conservatives, as well as criticism from several in the mainstream media. Margaret Talev, president of the White House Correspondents Association, issued a statement admitting that Wolfe’s “monologue was not in the spirit” of “offer[ing] a unifying message.”

CNN editor-at-large Chris Cillizza called the abortion joke “beyond the pale,” asking, “Does anyone think this joke is funny?” and “does anyone celebrate abortion — even jokingly?” The Hill announced it would not participate in next year’s dinner unless “major changes” were implemented to prevent it from “cast[ing] our profession in a poor light.”

Just-retired Planned Parenthood CEO Cecile Richards distanced herself from the performance by saying abortion “isn't a topic that I make jokes about,” but refused to criticize Wolfe, saying “that was her job.”

During his answer, Pence also said he “couldn’t be more honored to serve shoulder-to-shoulder with the most pro-life president in my lifetime,” crediting Trump with taking “one step after another to affirm this administration’s commitment to the sanctity of life.”

Trump has pleasantly surprised many pro-life leaders with his pro-life actions so far, such as pledging to appoint Supreme Court justices that will overturn Roe v. Wade, making numerous pro-life administrative appointments, executive actions restoring the ban on overseas abortion funding and rolling back the Obamacare abortifacient coverage mandate, and calling for legislation banning late-term abortion and defunding Planned Parenthood.