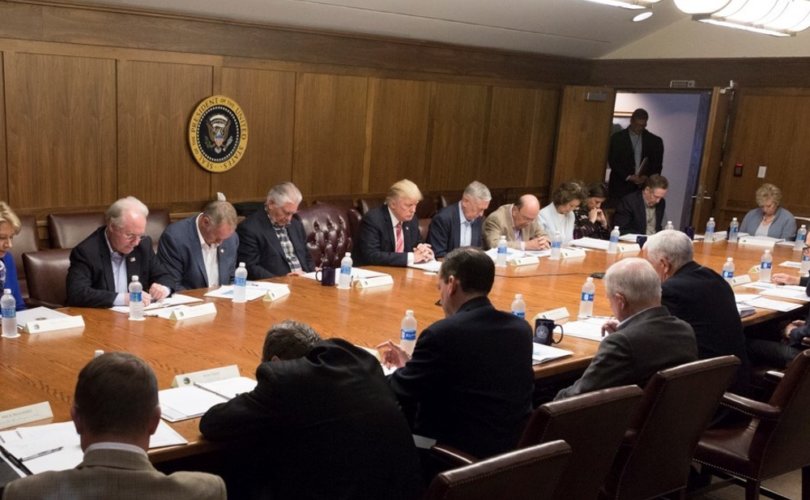 WASHINGTON, D.C., May 4, 2018 (LifeSiteNews) – Prayer is still going on all the time inside the Trump White House, Vice President Mike Pence said this week.

The vice president said it’s not only on certain occasions such as Thursday’s National Day of Prayer that it takes place, and the president is a frequent prompter of that prayer.

“There's prayer going on on a regular basis in this White House,” stated Pence. “And it's one of the most meaningful things to me.”

“Whether it's public meetings or not,” Pence said, “I've lost count of the number of times that the president has nudged me, or nudged another member of the Cabinet and said, 'Let's start this meeting with prayer.'”

“He’s someone who really believes in the power of prayer,” added Pence, “and in the importance of faith in American life.”

The vice president’s comments came in an interview with CBN News just after President Donald Trump oversaw celebration of the National Day of Prayer in the Rose Garden and signed an executive order establishing a new faith-based office.

Pence said it makes sure all levels of the federal government are partnering with faith-based groups on various federal programs.

“This is really about making sure that as we develop policies for the country, that we are always making room for those inalienable rights, the free exercise of religion that Americans cherish,” said Pence.

Reports of a “spiritual awakening” in the White House surfaced not long into the Trump presidency, with some Cabinet officials, including Pence, attending a weekly Bible study conducted by a Christian minister.

Some of the reports drew ire from liberals and others claiming a violation of so-called separation of church and state.

Trump had made the promise to protect religious liberty rights a number of times on campaign trail, and he has spoken or taken action in defense of religious freedom a several times since taking office.

Trump’s Department of Health and Human Services (HHS) established a new division within HHS’s civil rights office to enforce conscience protection and religious freedom for healthcare workers back in January called the Conscience and Religious Freedom Division of the Office of Civil Rights (OCR).

In May of last year Trump signed an executive order allowing church’s to speak from the pulpit on political issues and not risk their tax-exempt status, while also protecting religious freedom in speech for individuals.

Then in July of last year Trump appointed pro-life Kansas Governor Brownback for a religious persecution watchdog post called the, “Ambassador for Religious Freedom.” In it Brownback leads the Office of International Religious Freedom, which monitors how people of religion are treated across the globe.