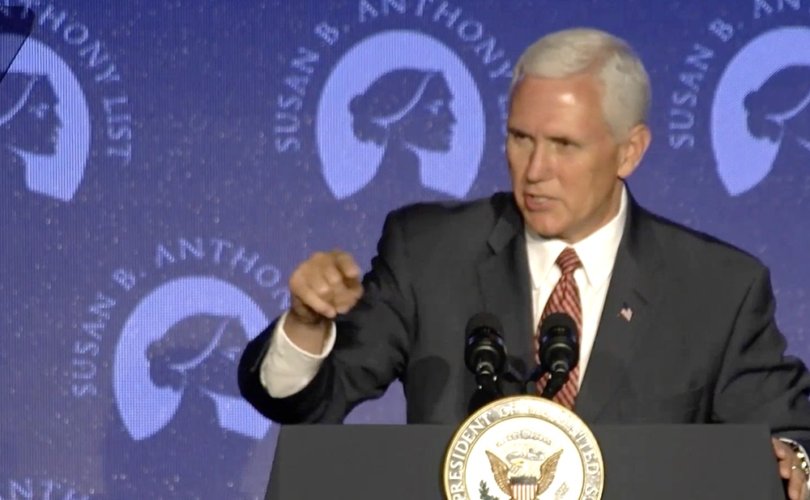 “When it comes to Obamacare, I don't have to remind anyone in this room that this is why Obamacare has got to go,” he said during his May 3 keynote address at the Susan B. Anthony List Gala dinner in Washington, D.C.

“Despite all the promises that were made, despite the tireless work of everyone in this room to stop it so many years ago, Obamacare has allowed taxpayer money to be used to purchase health insurance that covers abortion, among all of its other failings,” he added.

Pence told the pro-lifers that President Trump remains “unwavering in his commitment to defend life and protect women and children.”

Life is winning in America because of the courage, conviction and prayers of the pro-life community. An inspiring evening at the #SBAgala! pic.twitter.com/cZ31OB8VyN

While this is the second time Pence has addressed the Susan B. Anthony List Gala dinner, it is his first time as Vice President. His first occasion was in 2011.

Pence called the day Obamacare passed a “day of disappointment for the sanctity of life” in America because of its funding of abortion.

“But hope is finally shining through. The bill before the Congress actually eliminates Obamacare’s abortion expansion and it defunds Planned Parenthood, and keeps the President’s promise to devote those resources to healthcare providers that help women without promoting abortion,” he said.

“When this bill passes, it, I believe, will be one of the defining victories for life,” he added.

As Pence expected, the U.S. House today voted 217 to 213 to defund Planned Parenthood and repeal Obamacare, sending its replacement, “TrumpCare,” to the Senate. The American Healthcare Act (AHCA) strips Planned Parenthood of most of its federal funding for the next year.

On the same day, however, the U.S. Senate voted 79 to 18 to pass an omnibus budget that funds Planned Parenthood in a deal made by Republicans and Democrats to prevent a temporary government shutdown.

Pence said that defunding the abortion giant in the House of Representatives is the “first stage.”

“Then we head to the United States Senate,” he added.

He called the Congressional vote a “pivotal moment in the life of this movement” and in the “life of our nation.”