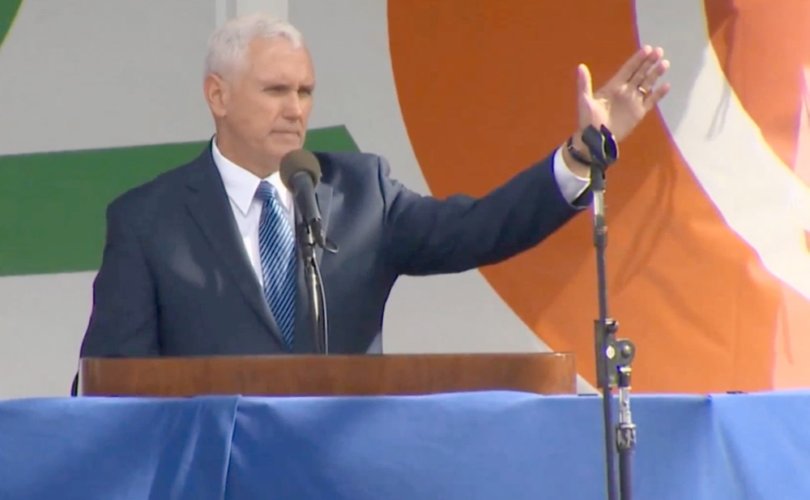 The pro-life Republican will address the Campaign for Life Gala on Wednesday, May 3, a statement from the national pro-life group said.

“We are honored to have our good friend Mike Pence return to keynote our annual Gala as Vice President of the United States,” SBA List President Marjorie Dannenfelser said. “It is a fitting homecoming for him, showing how far both he and the pro-life movement have come and how much we have accomplished together.”

The vice president had given the group’s keynote address six years earlier at the event as a U.S. Representative for Indiana in 2011.

Pence, who has a solid pro-life record from his time in the U.S. House and as governor of Indiana, addressed the March for Life in January, the first sitting vice president to do so.

Pence’s presence on the 2016 GOP presidential ticket reinforced the party’s pro-life platform, and his appearance at the March’s rally bolstered the pro-life community with hopes of making strides in Washington with the incoming Trump administration.

“Unborn children and their mothers could not have a stronger ally at President Trump’s right hand to help carry out the pro-life agenda he has promised,” Dannenfelser said. “Mike Pence has been an unflinching pro-life champion throughout all his years of public service. He understands that not only is standing up for life the right thing to do, it is a winning issue.”

Pence made headlines in March after a Washington Post profile of his wife Karen cited comments the vice president made 15 years earlier about steps the couple takes to protect their marriage.

Pence had also hosted an unprecedented meeting with roughly 40 U.S. pro-life leaders in his office at the White House on the evening before the March for Life. He tweeted later that he was honored to meet with the pro-life representatives.

Pro-life Senator Steve Daines, a Republican from Montana, will MC the 10th annual SBA List event. The May 3 gathering will take place at the Andrew Mellon Auditorium in Washington, D.C.