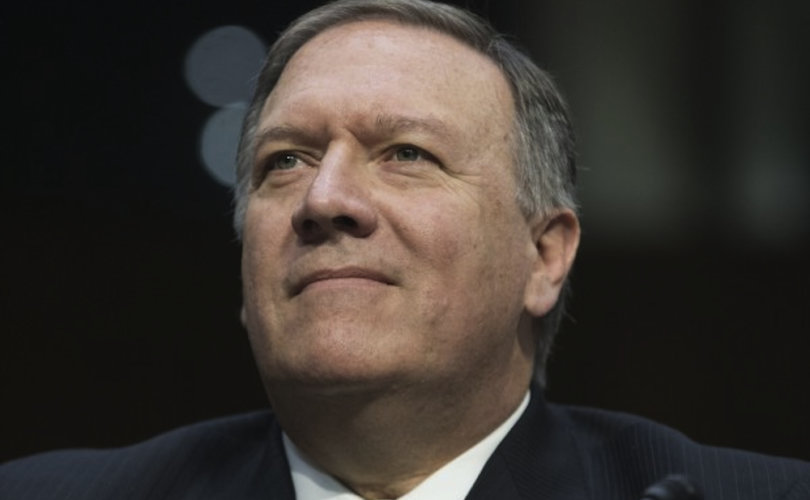 The Human Rights Campaign (HRC), which advocates for an ever-increasing laundry list of gay and transgender rights in Washington, D.C., is upset with President Trump’s decision:

“Mike Pompeo’s longstanding opposition to LGBTQ equality makes him a reckless choice to lead our nation’s diplomatic efforts,” HRC president Chad Griffin said in a public statement. “The decision to nominate anti-LGBTQ Mike Pompeo could have serious consequences for the United States and LGBTQ people around the globe. The State Department has a crucial role to play in advancing human rights — a role which was already rapidly declining under Tillerson. This decision has the potential to make a dire situation even worse. Pompeo does not deserve to be confirmed.”

“Pompeo's attacks on LGBTQ equality are long and well-documented: he opposes marriage equality, and, as a member of Congress, co-sponsored legislation to allow states to not recognize same-sex marriage and to allow businesses and organizations using taxpayer dollars a license to discriminate against LGBTQ people,” the HRC statement continued. “Equally as troubling, his political career has been funded by anti-LGBTQ hate groups, including the Family Research Council.”

Gay-oriented media site LGBTQ Nation provides a more detailed list of what its editors consider to be Pompeo’s “six most anti-LGBT Moments,” suggesting his appointment is “reason for trepidation.” According to the site, Pompeo:

Pompeo opposed the repeal of Don’t Ask Don’t Tell (DADT) in 2010, as GLAAD reports, arguing that “when you enter the army you give up a few of your rights.” In 2011, while speaking at the Values Voter Summit, shortly after DADT was repealed, “we cannot use military to promote social ideas that do not reflect the values of our nation.”

The former CIA director and House of Representative member has been one of the most vocal opponents of marriage equality, fighting it even after the 2015 Supreme Court ruling making it the law of the land. He called that ruling “a shocking abuse of power” that “flies in the face of centuries of shared understanding of our Constitution.”

Pompeo co-sponsored the State Marriage Defense Act, an attempt to place the state’s anti-marriage equality laws ahead of federal law.

“I think as you look back at civilization, look back at history, you find the strength of these families having a father and a mother is the ideal condition for childbearing,” Pompeo said during a 2014 interview. “Doesn’t mean there aren’t great families with single parents, great young men and women raised without either parent. If you’re asking for what is ideal, I think it’s being raised by a man and a woman.”

Pompeo also co-sponsored the Marriage and Religious Freedom Act, to give religious people a “license to discriminate” against the LGBTQ community and others, so long as they could cite their beliefs in so doing. The legislation is similar to the First Amendment Defense Act (FADA), recently reintroduced in Congress. The Trump administration has already shown they are in favor of such legislation.

Pompeo opposed reauthorizing the Violence Against Women Act due to language expanding the law to cover LGBTQ people.

The vote was to amend “the Violence Against Women Act of 1994 (VAWA) to add or expand definitions of several terms used in such Act, including … underserved populations” as populations that face barriers in accessing and using victim services because of geographic location, religion, sexual orientation or gender identity.”

As acting CIA director, he cancelled a planned speech about diversity and LGBTQ rights, to be given by Judy and Dennis Shepard, the parents of Matthew Shepard, whose murder drew global attention and for who is the partial namesake of the country’s federal hate crime law.

The Shepards are the founders of the Matthew Shepard Foundation.

Sources said the cancellation “left employees disheartened — particularly those invested in the diversity reforms that were emphasized during the tenure of John Brennan, the former CIA director.”

Another high profile LGBT group, GLAAD — which defines itself as “a dynamic media force,” leading to cultural change — similarly criticizes Pompeo for what it sees as anti-LGBT behavior, as part of the organization’s “Trump Accountability Project.”

While LGBT groups weren’t particularly fond of President Trump’s first choice for the job, they praised Tillerson for the very things for which pro-family life groups have criticized him. As C-Fam’s Austin Ruse points out, “It has never been clear what positions Rex Tillerson has on abortion and same-sex marriage, though he served on the board of directors of the Boy Scouts when the group began to allow out homosexual scout leaders.”

Chris Johnson, a reporter for D.C.’s Washington Blade — which serves the local LGBT community — tweeted, “Mike Pompeo opposed same-sex marriage as member of Congress. Will be interesting to see if he continues Tillerson's practices at State of keeping an LGBT envoy, issuing a Pride proclamation.”

Mike Pompeo opposed same-sex marriage as member of Congress. Will be interesting to see if he continues Tillerson's practices at State of keeping an LGBT envoy, issuing a Pride proclamation.

The U.S. State Department: in need of change

“President Trump has been an agent of change in Washington. It is hard to identify another federal agency that is in more need of change than the State Department, which has historically and consistently been at cross purposes with American values and principles,” said Tony Perkins, president of the Family Research Council (FRC) in a statement. “Mike Pompeo is a proven leader, and I am very confident that he will be the desperately needed agent of change at State.”

“While Pompeo would likely separate the State Department from full LGBT advocacy, it is likely he would continue to mark events like Transgender Remembrance Day, a day dedicated to those who were attacked and killed for their identity,” PJ Media’s Tyler O’Neil said. “He also would likely defend the lives of LGBT people under assault in various countries. Just because Pompeo disagrees with the LGBT lifestyle and advocates for the freedom to disagree does not mean he supports the absolute repression of LGBT people in foreign countries.”

In 2013, Pompeo vowed to continue his fight against abortion, marriage equality, and other important issues “each and every day.”

As a Kansan, I hold a deep reverence for the sanctity of life, the solidarity of family, and the solemnity of marriage. I will continue the fight to uphold these fundamental ideals each and every day. I am, and always will be, pro-life and will defend life from conception to natural death. I will continue to oppose any taxpayer funding for abortion. I also fully support the traditional institution of marriage. Strong families are the most important building block of our Republic, and we must preserve them for the sake of our community and our culture.