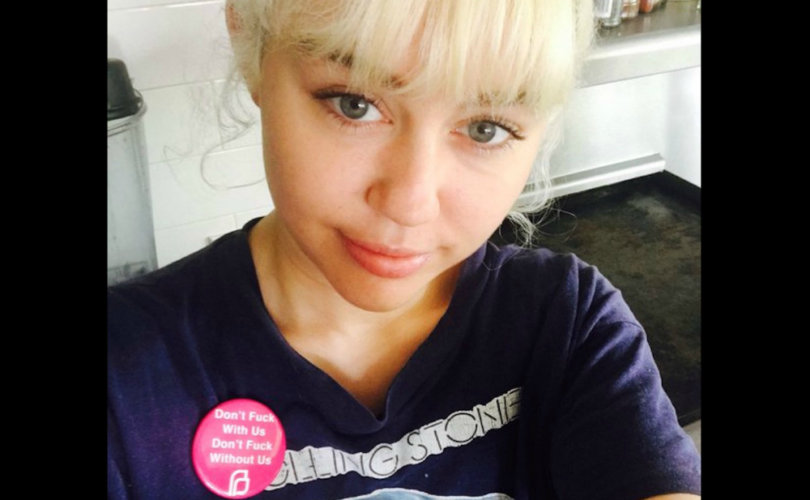 NEW YORK CITY, April 19, 2016 (LifeSiteNews) — Miley Cyrus is selling pictures of herself for thousands of dollars each to raise “big bucks for Planned Parenthood.”

The one-time “Hannah Montana” star made the announcement in a profanity-laced video from her bedroom that was played during the Planned Parenthood annual Spring Luncheon at the Pierre Hotel in New York City.

“Thanks for having me in my bed,” Cyrus began.

She said she would sell 50 limited-edition prints of a photo depicting her in a steamed up shower, taken by Marilyn Minter, for $5,500 each.

For the less affluent, she said she would also sell t-shirts with the image for $50 a piece.

“I want to unveil our M&M collaboration and hopefully make some big bucks for Planned Parenthood.”

Her photographer, Marilyn Minter, spoke of her experience having an abortion at Planned Parenthood in the 1970s and said the abortion industry should pattern itself after the LGBT movement.

“I want to take our cues and inspiration from the marriage-equality movement,” Minter said.  “So, step the f*** up, everybody.  Between us, we can do anything!”

“This is only the beginning,” she said.

“Thank you guys for all that you do, and f*** yeah!” Cyrus concluded, to the delight and applause of the 500 women at the luncheon.

Minter also praised Marc Jacobs, who made the $50 t-shirts.  “He’s always been fearless,” she said.  “This could raise a fortune for Planned Parenthood.”

Planned Parenthood gave Minter a “Woman of Valor” award for her support of the abortion conglomerate.  A showing of Minter's work, entitled, “Pretty/Dirty,” will be on display in Brooklyn this fall.