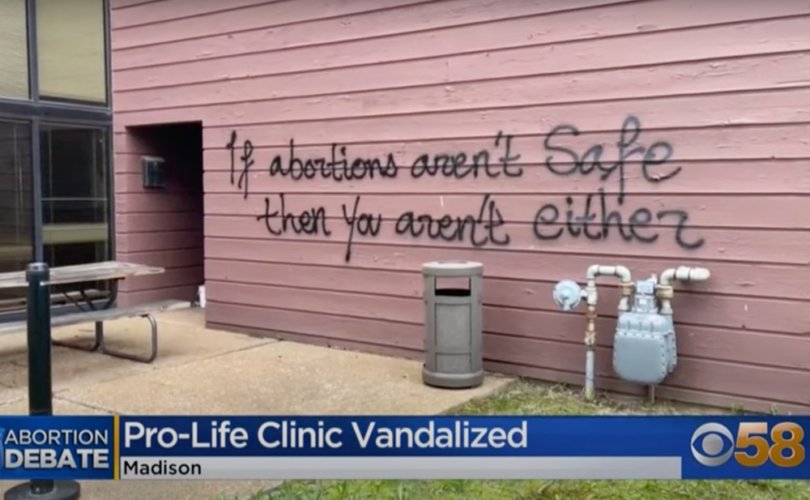 MADISON, Wisconsin (LifeSiteNews) — A militant pro-abortion group appears to be taking credit for vandalizing and setting fire to the office of a Wisconsin pro-life advocacy group on Mother’s Day, declaring they “have run thin on patience and mercy” for pro-lifers and will “adopt increasingly extreme tactics to maintain freedom over our own bodies.”

The pro-abortion organization, which calls itself “Jane’s Revenge,” allegedly claimed responsibility for the Mother’s Day arson and vandalism of Wisconsin Family Action’s headquarters in a “communiqué” obtained by Robert Evans, an investigative reporter for the online news site Bellingcat.

Vandals had set fire to the building Sunday morning and spray-painted the words “If abortions aren’t safe then you aren’t either” on an exterior wall, along with an anarchist symbol.

Evans, who said the group’s statement was sent to him from a trusted “anonymous intermediary,” shared the radical message and described its contents in a Tuesday morning Twitter thread.

According to Evans, the name “Jane’s Revenge” refers to the 1970s-era Jane Collective, which was an underground organization that helped Chicago women obtain illegal abortions.

The statement asserted that the firebombing attack and vandalism of the Wisconsin Family Action headquarters in the north end of Madison on May 8 “was only a warning,” and promised that pro-abortion militants will “adopt increasingly extreme tactics” to oppose protections for the unborn.

The statement was sent to me through an anonymous intermediary I trust. It is hosted on a Tor site (link to follow). The statement is titled “first communique” and opens with the words, “This is not a declaration of war”.https://t.co/5ZhcDHiA7A pic.twitter.com/9Y0d03mXoq

According to the group’s violently-worded manifesto, members plan to perpetrate more acts of violence against pro-life advocacy groups.

“We are literally fighting for our lives,” the activists declared. “We will not sit still while we are killed and forced into servitude.”

Demanding “the disbanding of all anti-choice establishments, fake clinics, and violent anti-choice groups within the next thirty days,” the group said they were “forced to adopt the minimum military requirement for a political struggle.”

Evans said in his Tuesday Twitter thread that he has “not had any direct contact with people claiming to be members of this group or to have been responsible for this attack,” but explained that the intermediary “who sent this to me has a reputation for extreme reliability.”

“I believe this statement is newsworthy for a number of reasons, including the fact that a large number of people are speculating that this attack may have been a false flag,” Evans said.

During a Monday press conference with the Madison Police Department (MPD), St. Paul Bureau of Alcohol, Tobacco, and Firearms (ATF), and Milwaukee FBI, MPD Chief Shon Barnes had dismissed a suggestion that the Sunday attack on the pro-life office had been an “inside job.”

Barnes said that while some people may have “conspiracy theories,” there was no reason to believe pro-lifers had perpetrated the attack upon themselves.

In his Twitter thread, Evans also opined that he “would be very surprised if this was not a legitimate attack.”

I believe this statement is newsworthy for a number of reasons, including the fact that a large number of people are speculating that this attack may have been a false flag.

I would be very surprised if this was not a legitimate attack.

Federal agents and detectives from the Madison Police Department have since begun investigating the claim made by the so-called “Jane’s Revenge” group, The Guardian reported.

A spokesperson for the federal Bureau of Alcohol, Tobacco, Firearms and Explosives (ATF) told the newspaper Tuesday that while its agents were aware of the statement, the agency was unable to provide further details due to the ongoing investigation.

The Madison police department also said it was “aware of a group claiming responsibility for the arson at Wisconsin Family Action” and is “working with our federal partners to determine the veracity of that claim”.

The Sunday attack in Wisconsin and subsequent manifesto from the “Jane’s Revenge” group came amid a rash of criminal incidents targeting Catholic churches and pro-life centers over the weekend, following the unprecedented leak of the U.S. Supreme Court’s draft majority opinion in the Dobbs v. Jackson Women’s Health Organization abortion case last week.

According to the leaked opinion, the Supreme Court is angled to rule in favor of Mississippi’s 15-week abortion ban by overturning both Roe v. Wade along with Planned Parenthood v. Casey (1992), which upheld Roe.

Pro-abortion activists have responded to the news with outrage and renewed efforts to codify the “federal right to abortion” as the law of the land.

Others have attempted to disrupt a Catholic Mass, protested outside the homes of pro-life Supreme Court justices, and committed acts of vandalism and theft, spiking tensions between pro-life and pro-abortion advocates.

As the nation awaits the final ruling in the Dobbs case, it appears pro-abortion protests and activism are likely to continue to ramp up.

In the conclusion of the “Jane’s Revenge” manifesto, the group reiterated that the firebombing of the Wisconsin Family Action headquarters “was only a warning,” adding, “Next time the infrastructure of the enslavers will not survive.”

“Medical imperialism will not face a passive enemy,” the group said. “Wisconsin is the first flashpoint, but we are all over the US, and we will issue no further warnings.”

“Jane’s Revenge” activists stated that they are not alone in their militant pro-abortion activism, but are only one of “many.”

“We are in your city. We are in every city. Your repression only strengthens our accomplice-ship [sic] and resolve,” they wrote.

Anyone with information about the vandalism and arson at the Wisconsin pro-life center is asked to contact the Madison Area Crime Stoppers at 608-266-6014.