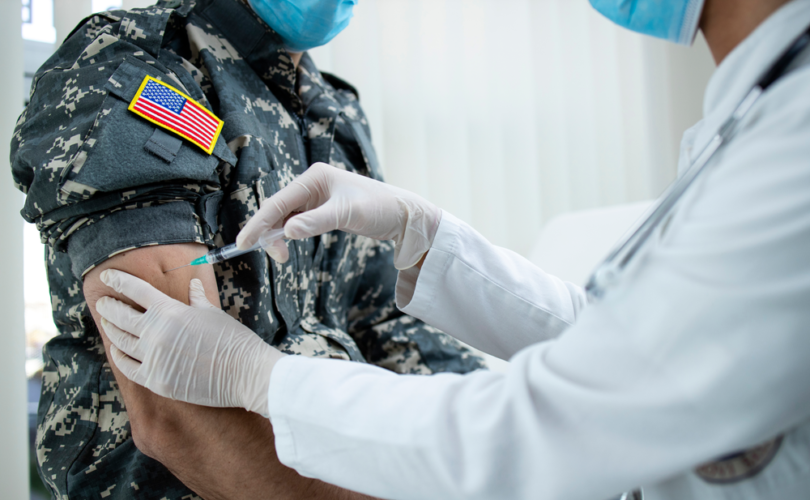 (LifeSiteNews) — Thomas Renz, the attorney representing three Department of Defense (DoD) whistleblowers, says it is absurd to believe a “glitch” caused an unusual spike in medical diagnoses on the military’s database in 2021, the year military personnel were ordered to receive COVID-19 shots.

“How did the database correct itself? If they did not notice the error but the 2021 data was correct, the error must have been remedied,” Renz said. “How could that happen?”

Renz is referring to the Defense Medical Epidemiology Database (DMED) that tracks medical diagnoses among military personnel. According to a lawsuit filed by three U.S. army medical officers on February 16 in the U.S. District Court for the Northern District of Alabama, there were huge spikes in several dozen medical conditions in 2021.

The database is available to authorized users in the military and health researchers.

The military’s only explanation for the spikes was given to PolitiFact, a “fact-checking” website owned by the nonprofit Poynter Institute for Media Studies. Peter Graves, a military spokesperson, told PolitiFact the huge spikes in 2021 were due to the underreporting of conditions between 2016 and 2020.

“The DMED system has been taken offline to ‘identify and correct the root cause of the data corruptions,’” said Graves, as reported in the PolitiFact post.

To believe the “glitch” narrative, one has to accept several absurd assertions, Renz says.

“The DoD said the numbers were wrong from 2016 to 2020 but then correct in 2021,” he said. “The DMED database is monitored by an entire division of the military and numerous sub-agencies throughout DHHS (Department of Health and Human Services), including (Dr. Anthony) Fauci and the CDC (Centers for Disease Control and Prevention).

“It is also cited in peer-reviewed articles and scientific literature. For an ongoing glitch to have occurred for those five years, we have to believe that none of these people noticed an error, that according to the updated numbers was over 2,000 percent, in some instances,” Renz said.

Renz presented the 2021 data on January 24 during a roundtable on Capitol Hill hosted by Republican U.S. Sen. Ron Johnson of Wisconsin. After the discussion, Johnson, a ranking member of the Permanent Subcommittee on Investigations of the Senate Committee on Homeland Security and Governmental Affairs, wrote a letter to Defense Secretary Lloyd Austin on February 1 asking for an explanation of the spikes in medical diagnosis in 2021.

“Based on data from the Defense Medical Epidemiology Database (DMED), Renz reported that these whistleblowers found a significant increase in registered diagnoses on DMED for miscarriages, cancer, and many other medical conditions in 2021 compared to a five-year average from 2016 to 2020,” Johnson wrote.

“For example, at the roundtable, Renz stated that registered diagnoses for neurological issues increased 10 times from a five-year average of 82,000 to 863,000 in 2021,” Johnson wrote.

In the letter, Johnson included increases in other conditions such as a 2,181% jump in hypertension, a 472% increase in female infertility, a 468% jump in pulmonary embolism, as well as spikes exceeding 400 percent for several cancers.

During the roundtable, Renz pointed out that the 2021 DMED database does not include diagnoses for myocarditis. In his letter, Johnson asked if the data has been removed and who removed it.

“The DoD has still not, to my knowledge, responded to Senator Johnson, nor have they responded to the team representing the whistleblowers that shared this information,” Renz said in a letter he wrote to elected officials and shared with LifeSiteNews.

Johnson’s office sent three letters to DoD regarding the database and to Manish Malhotra, the chairman and CEO of Unissant, the company that manages DMED. Johnson’s office states as of March 10, there has been no response from the military other than a confirmation of receipt.

Additionally, there has been no acknowledgment of the “glitch” by the research community. “To my knowledge, not a single peer-reviewed article has put out a warning that all past studies conducted involving this data were incorrect by a huge margin. Why is that?” Renz asked.

David Gortler, a pharmacologist and FDA and health policy fellow at the Ethics and Public Policy Center who worked as an FDA commissioner for drug safety under the Trump administration, says it is important to review large databases for safety red flags.

“When brand new mRNA technology is administered to a large number of people, adverse events are bound to occur. That’s why FDA (U.S. Food and Drug Administration) and CDC (Centers for Disease Control and Prevention) have told all Americans how critical it is to report those adverse events to VAERS, the database for tracking adverse event reports,” Gortler said. “In turn, the CDC, FDA, and manufacturers must respond to what is shown, and warn the public about what it perceives as a pattern.

“As a drug safety expert, I’ve written about how the FDA had clear indications from Day 1 that mRNA vaccines do cause myocarditis and pericarditis and about how that pattern has been born out both epidemiologically in athletes in VAERS and other drug safety databases,” Gortler said.

“Unfortunately, even though today there are hundreds of thousands of a wide variety of adverse events collected over a two-year period, and that these documented cases are known to only represent a small fraction of the actual number of events that occur, officials at the FDA, CDC, Pfizer, and Moderna have yet to make even a single change to mRNA vaccine safety wording to notify Americans,” Gortler said. After all, what good is having everyone take the time to do all of that VAERS reporting if it just gets collected and nobody ever warns consumers about it?