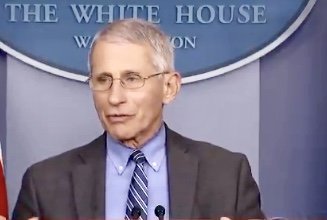 (LifeSiteNews) – White House COVID-19 czar Dr. Anthony Fauci’s refusal to share his suspicions about the origin of the virus cost the United States “millions of lives,” former White House director of trade and manufacturing policy Peter Navarro alleges in a new interview to promote his new book about the view of the pandemic from inside the Trump administration.

Calling the National Institute of Allergy & Infectious Diseases (NIAID) chief “toxic,” a “sociopath,” and a “narcissist,” Navarro told Breitbart’s Alex Marlow on Monday that Fauci’s biggest lie of omission” was “not to tell us — the president’s task force — in January that he strongly suspected, as he did, that that virus was from a lab in Wuhan, that he had funded that lab, and that he had authorized gain-of-function experiments which can turn harmless bat viruses into human killers.”

For months, Fauci has taken heat for his role in promoting “gain of function” (GOF) research, which entails intentionally strengthening viruses in a controlled environment to better study their potential effects. Fauci’s NIAID approved a federal grant to the nonprofit EcoHealth Alliance “to study bat-based coronaviruses in China,” including GOF research, which in turn funded research at the notorious Wuhan Institute of Virology (WIV), from which COVID-19 is suspected of escaping.

Despite his past support for GOF research, Fauci has vociferously denied funding it in China, a claim contradicted by documentation as well as a written statement from National Institutes of Health (NIH) Principal Deputy Director Lawrence Tabak, and for which Republican U.S. Sen. Rand Paul of Kentucky has advocated he be prosecuted for perjury before Congress.

“Fauci had to know,” Navarro said. “Fauci had to friggin’ know exactly what was going on. He held it from us. Millions of people — I can’t stress how important this is, if we had known then what we know now — we could have saved millions of lives if Fauci had just come clean.”

In June, a trove of emails released via the Freedom of Information Act revealed that NIH scientist Kristian Andersen told him on January 31, 2020 that the virus looked “potentially engineered,” yet Fauci continued to publicly dismiss the possibility that it had leaked out of a laboratory.

Navarro also told Marlow that Fauci was intensely opposed to instituting a travel ban to keep  COVID out of the country.

“There are four people [in the Situation Room] that are going to give me trouble,” Navarro recalled. “[Mick] Mulvaney, acting chief of staff, I’ve got one of Pompeo’s hacks there, the bumbling [Robert] Redfield, and of course [Alex] Azar, the secretary of Health and Human Services, but sitting across from me is little guy with little round glasses who I immediately get into a violent argument with and he just keeps insisting that travel bans don’t work. It’s like Flaubert’s parrot.”

“I’m thinking to myself, ‘Who is this guy?’” he continued. “Finally, I say to [Fauci], ‘Dude’ — and I actually called him ‘dude,’ I didn’t know I should have addressed him as Dr. Fauci at the time — I go, ‘Dude, you mean to tell me if there’s like 20,000 Chinese nationals coming in every day to Kennedy and Dulles and LAX and O’Hare — many of them lit up with the Wuhan virus like a Christmas tree — that [they should] just come on down?’”

But Fauci “just kept saying travel bans don’t work,” Navarro said. He also claimed that Fauci advised the former president “not to worry” about the virus in January 2020.

Navarro wants his book, In Trump Time: My Journal of America’s Plague Year, to help “get Fauci out of government and into a jail cell.”