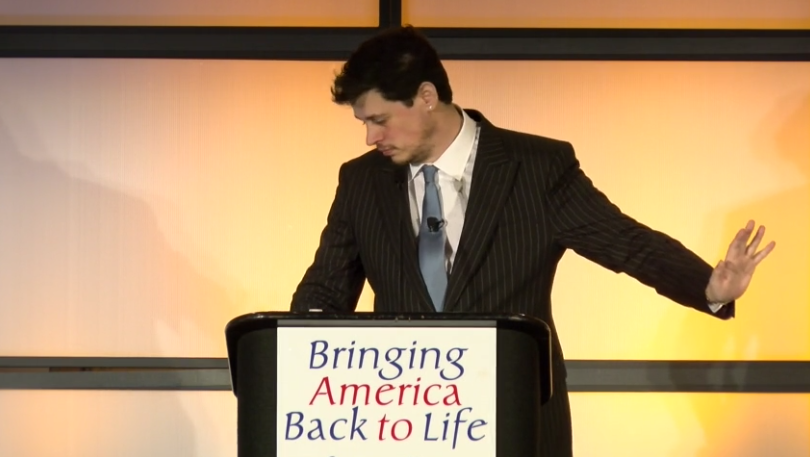 INDEPENDENCE, Ohio (LifeSiteNews) — In an unexpected twist, “ex-gay” author and conservative provocateur Milo Yiannopoulos gave a second speech at the Bringing America Back to Life Convention just 24 hours after his first.

Daily Wire podcaster and author Matt Walsh, scheduled to speak on Saturday night, could not make it to the convention because of a snowstorm that grounded his flight out of Nashville. But on just a few hours’ notice, Yiannopoulos accepted the offer to take Walsh’s place.

The theme of Yiannopoulos’ Saturday night talk was clarity and penance, a fitting topic for the Lenten season. Describing his experience with a week-long water-only fast he was still maintaining until Saturday afternoon, Milo colorfully explained the agony of days two through four, which soon gave way to a unique mental clarity and “stillness” by days five and six.

But Milo emphasized that clarity and stillness of mind are a sine qua non of “getting right with God,” of embracing the virtue of charity and learning to forgive others, in addition to overcoming one’s inordinate lusts and desires.

On the issue of abortion, Milo noted how his mental clarity made it all the more “obvious” to him that protecting the lives of the unborn is the “most urgent … moral problem” of our time. It’s a moral problem on which he sees significant progress.

“When you have that foundation of intellectual and moral clarity, it’s very difficult to care about anything else,” he added. “And here’s some good news: you’re winning. Slowly, but you are. This is the only issue that Christian conservatives are actually gaining ground on. The only one. What a blessing that it’s this one.”

Pro-abortion activists and politicians may be in Satan’s grip and it’s only a matter of time before their movement loses, Milo said, but he urged the audience to show them “a little more compassion than your heart really wants to.” Because his life mission is now oriented toward saving souls, he expressed a desire to bring the “light and truth of Jesus Christ” to pro-aborts. He predicted they will be in a “very bad place” once the pro-life movement becomes victorious.

“I’m learning that loving people to death — figuratively speaking — is quite a powerful and effective thing, versus maybe what I did in previous chapters of my career which you might characterize as churlish, brutal, sarcastic, and vindictive,” he added.

Still, Milo made it clear that loving someone does not mean treating them with kid gloves. He knows this firsthand, as people who lovingly told him to reject the homosexual lifestyle weren’t necessarily being “nice” in the strict sense of the term.

“Asking us to ‘tone it down’ is asking us to stop loving people,” he said. “Because tough love, the love that says ‘No,’ is the only love that matters. It’s easy to say ‘Yes’ to people, but it’s very difficult to say, ‘I love you, and therefore you may not.'”