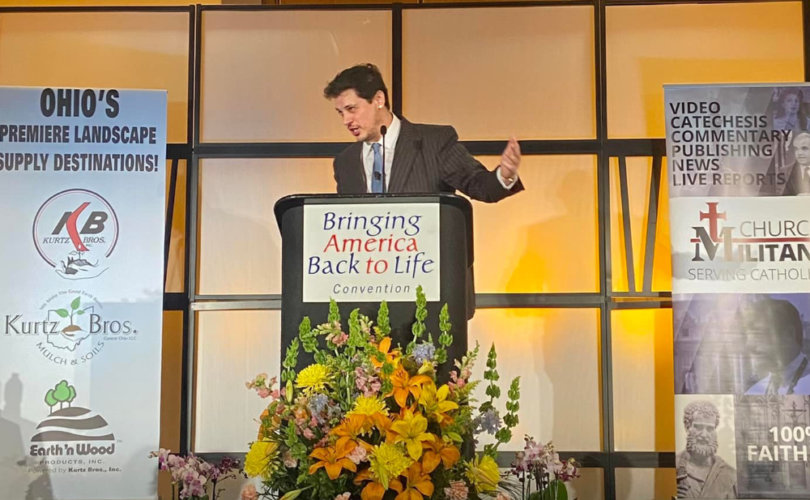 INDEPENDENCE, Ohio (LifeSiteNews) — The headline speaker at the Bringing America Back to Life Convention last Friday was Milo Yiannopoulos, an author and former Breitbart columnist who renounced his homosexual lifestyle, repented, and returned to the Catholic Church last year.

Watch Milo’s Friday night speech below (plus a Q&A you really don’t want to miss!):

Through no fault of his own, Milo’s first-ever appearance at the convention did not proceed according to plan. A weather-induced flight delay in New York put him behind schedule, and upon landing in Cleveland he rode in the back of a squad car to make it to the hotel ballroom as quickly as he could.

Speaking with no notes after leaving his luggage behind, Milo gave an impromptu account of his turning away from homosexuality and the challenges he’s now facing.

The conservative provocateur specifically raised his struggles with anhedonia, defined as the inability to feel pleasure, and implied that it is much more difficult to deal with than celibacy.

“When I was unknowingly choosing to live that [homosexual] life, I was condemned to loneliness, addictions, and a variety of other things,” Milo said in reference to the “endless pursuit of dopamine and pleasure” which colored that life.

“I have permanently fried the reward circuits in my brain … Once you fry those circuits, they don’t come back without decades of recalibration,” he added.

Milo also articulated his new twofold mission after returning to the Catholic faith: to establish a Florida-based clinic to help gay men leave the homosexual lifestyle, and to protect the lives of the unborn.

“I’ve never changed on the gay thing, but I guess I’ve stopped being a hypocrite,” he said. “Without Christ, I am fairly sure that I would be dead.”