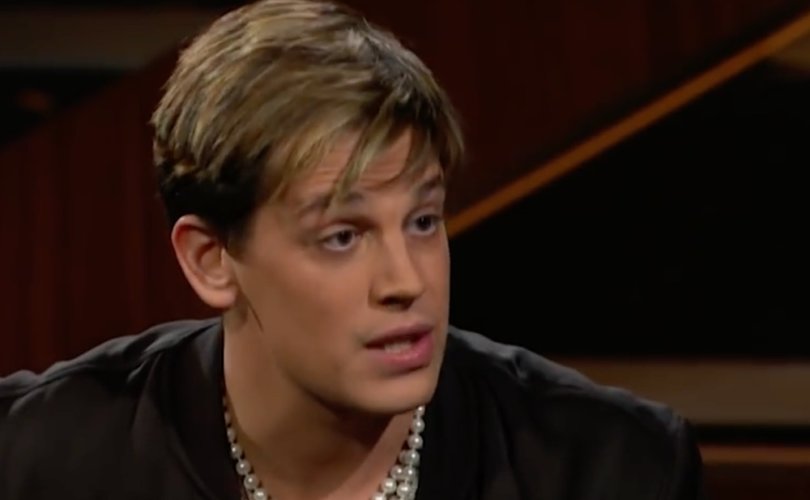 February 22, 2017 (LifeSiteNews) – “Gay conservative” and free-speech provocateur Milo Yiannopoulos apologized yesterday for comments he made more than a year ago joking about and approving of sex between adult men and teenage boys.

But even in his apology at his New York press conference, Yiannopoulos defended “gay” man-boy sexual relationships, and defiantly termed the late release of the video interview a “cynical media witch hunt from people who don’t care about children.”

In the previous two days, Yiannopoulos had lost a major book deal and was dropped as a speaker by the Conservative Political Action Committee (CPAC), after incendiary video excerpts from an interview with the online show “Drunken Peasants” in which he, in describing his own sexual abuse at the hands of two homosexual predators, seemed to defend sexual contact between homosexual men and young teen boys.

Yiannopoulos resigned as senior editor of Breitbart News, which had helped make him a conservative star by covering his free-speech activism, including his anti-PC “Dangerous Faggot” college tours.

He began his dramatic press conference by announcing in a written statement:

“I am a gay man, and a child abuse victim.

“Between the ages of 13 and 16, two men touched me in ways they should not have. One of those men was a priest.

“My relationship with my abusers is complicated by the fact that, at the time, I did not perceive what was happening to me as abusive. I can look back now and see that it was. I still don’t view myself as a victim. But I am one.”

In the January 2016 livestream video interview with the “Drunken Peasants” podcast, Yiannopoulos laughs about how he is better at orally sodomizing men because he did the same to a clerical predator (“Father Michael”) when he was a “sexually mature” 13-year-old boy.

He then defends sexual relationships between young men (including teenagers) and much older men as beneficial to young men.

“I’m grateful for Father Michael,” he says of the predator-priest in the video.

He continues in the interview with Drunken Peasants:

“The complexities and subtleties and complicated nature of many relationships. You know, people are messy and complex, in the homosexual world particularly. Some of those relationships between younger boys and older men, the sort of coming of age relationships, the relationships in which those older men help those young boys to discover who they are, and give them security and safety and provide them with love and a reliable and sort of a rock where they can’t speak to their parents.”

At the press event, Yiannopoulos reiterated how sexual relationships between adult men and teen boys can help the latter, but said he regrets using the word “boy.”

“I did say that there are relationships between younger men and older men that can help a young gay man escape from a lack of support or understanding at home. That’s perfectly true and every gay man knows it,” he said. “I do not believe sex with 13-year-olds is okay.”

He added: “When I mentioned the number 13, I was talking about myself, and the age I lost my own virginity. I shouldn’t have used the word ‘boy’ — which gay men often do to describe young men of consenting age — instead of ‘young man.’ That was an error. I was talking about my own relationship when I was 17 with a man who was 29.”

“I said some things on those internet live streams that were simply wrong,” he said. “I regret the things I said. I don’t think I’ve been as sorry about anything in my whole life. This isn’t how I wanted my parents to find out about this.”

Sexologists have in recent years labelled sex between adults and adolescents as “ephebophilia” – as opposed to pedophilia — but many conservatives see that as helping bridge a path toward the normalization of adult-child sex, arguing that no minor child can truly consent to sex with an adult.

“There is no disagreement among our attendees on the evils of sexual abuse of children,” said Matt Schlapp, president of the American Conservative Union, which runs CPAC, in his statement disinviting Yiannopoulos.

Milo soft-pedalled the historic “gay” male penchant for man-boy sex in his remarks yesterday, by adding the phrase “of consenting age.”

In San Francisco, in the early days of “gay liberation,” homosexual men used the slang term “chicken” as a slang term for boys under the age of consent whom they desired to sodomize. (The adult “gay” men were the predatory “chickenhawks.”) In Bruce Rodgers’ 1972 book Gay Talk: A (Sometimes Outrageous) Dictionary of Gay Slang, “chicken” is defined in part as “any boy under the age of consent.” And “chicken dinner” is “defined” as “sex with a teenager.”

Yiannopoulos said he does not support lowering the age of consent, which is 16 in his home country of the U.K., as it is in Canada. In the United States, it ranges from 16 to 18 years old, with some “close age” exemptions, according to an Age of Consent site run by the Rape, Abuse & Incest National Network (RAINN).

Yiannopoulos repeated yesterday his emphatic assertions over the previous 48 hours that he does not condone pedophilia, and said he was being smeared by those who assert otherwise.

“To repeat: I do not support pedophilia. It is a disgusting crime of which I have personally been a victim,” he said. “To be a victim of child abuse and for the media to call me an apologist for child abuse is absurd.”

“These videos have been out there for more than a year. The media held this story back because they don’t care about victims, they only care about bringing me down. They will fail,” he said.

Then, looking up at the gaggle of reporters, he said, “You guys are responsible for that, and [f—k] you for that.”

Breitbart News, which typically gives fawning coverage to Milo, had not mentioned him since the controversy broke, until it reported on yesterday’s press event. But Breitbart’s editor-in-chief, Alex Marlow, called the comments “very troubling and upsetting… The bottom line is the comments are not defensible.”

Yiannopoulos praised Breitbart for standing by him amidst all his free speech controversies, most recently at UC-Berkeley, where left-wing riots earlier this month led to cancellation of his scheduled “Dangerous Faggot” speech.

He said that he is talking to other publishers about his upcoming book, Dangerous, after Simon & Schuster cancelled it and his $250,000 book contract in the wake of his man-boy sex comments. And he predicted that it will now sell better than before due to all the new attention and pledged to donate ten percent of the book’s royalties to “child sex abuse charities.”

Earlier, Milo had posted on his Facebook page: “I’ve gone through worse. This will not defeat me.”

It seems there are as many “conservative” opinions on Milo as there are commenting conservatives. But social conservatives fear that his salacious, sodomitic candor and humor undermine morality in an already decadent society, and help mainstream homosexuality in the GOP.

“Yiannopoulos is more dangerous to conservatism than is ‘progressivism.’ He especially appeals to Millennials who have already drunk too deeply at the poisoned well that spews forth Leftist dogma on sexuality,” writes Illinois Family Institute cultural affairs writer Laurie Higgins.

“The witty, rebellious, promiscuous, flaming flame-thrower Yiannopoulos will make conservatism ‘safe’ for Millennials who want to preserve their liberal beliefs about sexuality while embracing conservative positions on fiscal issues and defense,” Higgins wrote.

Conservative writer Cliff Kincaid, founder of America’s Survival, said Milo “should never have been invited to CPAC, for there is no such thing as a ‘gay conservative’. … This is what happens when the conservative movement welcomes homosexuals into its ranks.”

In recent years, CPAC disallowed openly homosexual groups as sponsors, but under Schlapp the “gay” organization Log Cabin Republicans is back as a sponsor.

Yet other Republicans praised Milo, with thousands sending him messages of support on his Facebook page, he said. Following the press conference, on the conservative online program Right Side Broadcasting Network, host Steve Lookner read a comment from a Milo fan, “Allen,” who said, “Milo has helped Republicans shed the stigma of homophobia.”

Yiannopoulos said he has plans for his own media venture, and that his free-speech activism will not wane: “Don’t think for a moment that this will stop me being as offensive, provocative and outrageously funny as I want on any subject I want.”

“America has a colossal free speech problem. The land of the First Amendment has some of the most oppressive social restrictions on free expression anywhere in the western world,” he said. “I’m proud to be a warrior for free speech and creative expression.”