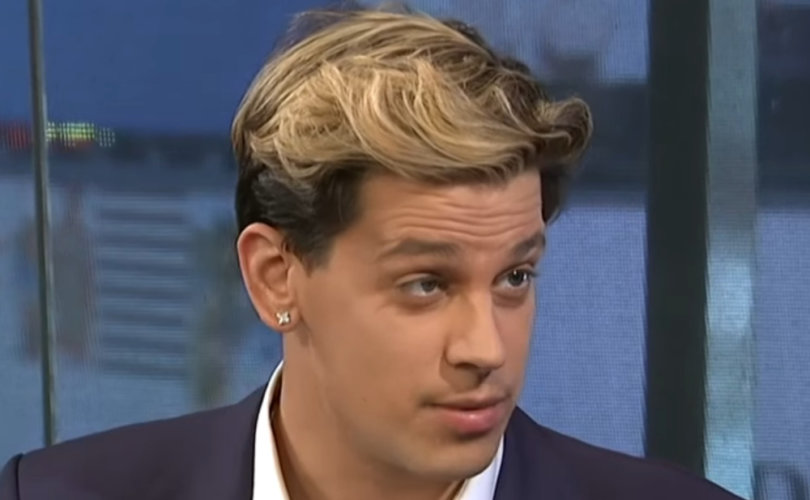 March 15, 2021 (LifeSiteNews) — After publicly describing himself as ‘ex-gay’ and saying he is consecrating his life to St. Joseph, conservative activist Milo Yiannopoulos has again rocked the world, announcing that he plans to open a “reparative therapy” center in Florida “to help other people go through the same journey that I’m on myself.”

“This has been the easiest thing to raise money for that I’ve ever done. There is an enormous demand for this among people who believe they’ve been led astray by … the gay establishment,” Yiannopoulos told the New York Post, which mislabeled the planned center as offering ‘conversion therapy’ in its original headline, before later altering it.

The extraordinary evil of the gay lobby

“Conversion therapy has a terrible reputation for precisely the reason that a lot of other things associated closely with either the religious right or the nationalist right have a terrible reputation,” he said, “Because they’ve been lied about consistently and strategically for decades.”

“‘Born this way’ is not science. It’s public relations. It’s a lie.”

“We don’t know very much for sure, we have a relatively clear idea about a lot of it, but here’s the thing: Since the eighties and nineties, we haven’t really been able to do any research that doesn’t conform to the propaganda because you cannot get funding for anything other than finding the gay gene,” he asserted. “So we’re operating in a gray area.”

“But there are things that we do know,” he continued. “The current consensus, scientific and everything else, seems to be that there are people who are born with a greater or lesser predisposition toward homosexuality.”

“What we also know for sure, is that ‘born this way’ is not science,” he declared. “It’s public relations. It’s a lie.”

“I will absolutely be funding that research, will be conducting that research, in addition to having a residential program and probably an outpatient program too,” he explained. “That’s why I think it’s more properly to be called a ‘center,’ rather than a ‘clinic.’ I see this as a sort of blend of research, center, and treatment.”

“Secular attempts at recovery from sin are either temporary or completely ineffective,” Yiannopoulos told LifeSite last week. “Salvation can only be achieved through devotion to Christ and the works of the Holy, Catholic, and Apostolic Church.”

As you might expect, my professional priorities are shifting somewhat, given my new spiritual preoccupations. Over the next decade, I would like to help rehabilitate what the media calls “conversion therapy.” It does work, albeit not for everybody. As for my other aspirations and plans, well, no change: I’ve always considered abortion to be the pre-eminent moral horror of human history. I’ll keep saying so — even more loudly than before.

They say if you let one sin in, others will follow, and now I truly know what that means: As I’ve begun to resist sinful sexual urges, I’ve found myself drinking less, smoking less … you name it.

“Celibacy is a modest and achievable middle term goal; naturally, in the end, my aspiration would be to take it all the way,” Yiannopoulos told the NY Post.