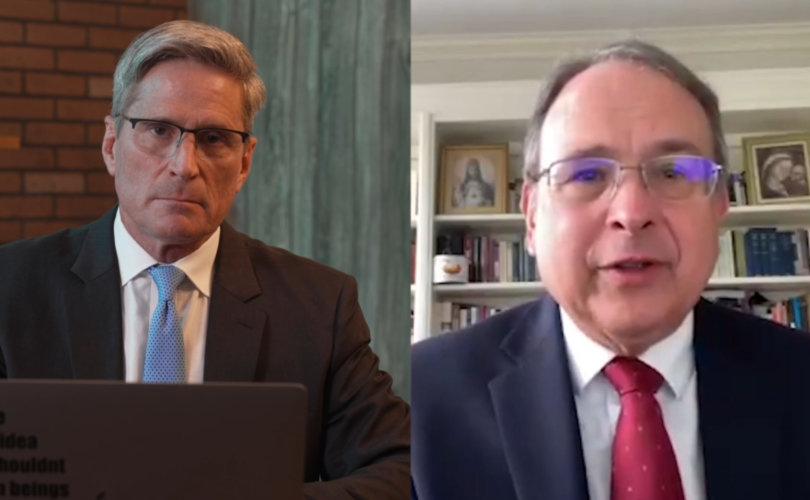 Ferrara also gave details about his law firm’s work to fight for religious exemptions for healthcare workers against a government intent upon stripping them away.

“This governor has no idea what she’s talking about in terms of vaccinology, epidemiology, [or] the science of infectious diseases,” Ferarra said.

“She’s just a politician who said some incredibly stupid things that ought to really sink the state’s position,” he continued.

“And to think at this point that this is all about saving lives, one would have to be terminally naive. This is clearly at this point a political struggle.”

At a September 26 speech at the Christian Cultural Center in Brooklyn, Gov. Hochul told church-goers she “prayed a lot to God during this time” and that God answered her prayers by making “the smartest men and women, the scientists, the doctors, the researchers. He made them come up with a vaccine. That is from God to us. And we must say ‘thank you, God.’”

The governor asked congregants to become her vaccine “apostles,” urging them to go out and evangelize the unvaccinated to “do what God wants” by taking the shot.

“She’s targeting for ostracization, opprobrium, harassment in the workplace, people who don’t agree with her view: her insane opinion that God inspired the Pfizer corporation to devise the vaccine. And that we now have a mystical body of Moderna. And we must all be inoculated to have unholy communion with each other,” Ferrara said.

The attorney said the governor’s comments prove the mass immunization scheme “is a religious mission.”

“We are literally dealing with a religious fanatic in this government, who as far as I can see, actually believes in the divinely inspired vaccine and the divinely imposed obligation to be inoculated with it,” he said.

During her Sunday speech, Gov. Hochul had also told those in attendance that those who’ve gotten the experimental drug are “the smart ones,” while any who refuse to get inoculated “aren’t listening to God and what God wants.”

Deriding the governor’s clearly religious and moralistic framing, Ferrara slammed Hochul for “making official pronouncements about a divinely-inspired vaccine and the heretics who won’t receive it: ‘You know who they are.’ ‘They.’ The heretics. The unvaccinated.”

Ferrara said the New York governor’s statements will actually help his legal firm build a case against Hochul for expressing “animus” against those opposed to mandatory vaccination.

“This is of decisive importance in the federal case because it shows official animus toward people who don’t agree with the official narrative of the necessity of these vaccines,” he said.

— Article continues below Petition —
PETITION: Ban COVID vaccine mandates for schools and universities!
Show Petition Text
42594 have signed the petition.
Let's get to 45000!
Thank you for signing this petition!
Add your signature:
Show Petition Text

Currently, the governor is prohibited by a temporary restraining order [TRO] issued by a federal judge from blocking employers from granting religious exemptions to healthcare workers who refuse the jab.

The federal judge’s decision came in response to a lawsuit filed by the Thomas More Society against Gov. Hochul, after Hochul’s government had moved to strip away all religious exemptions under an emergency authorization passed late last month.

Ferarra said that under the original emergency authorization, “the employer can’t even entertain a religious exemption or engage in the interactive process that’s required to agree to some sort of reasonable accommodation of objections to these vaccines.”

“In our case, what the judge has done is to issue a temporary restraining order which prohibits enforcement of this vaccine mandate to the extent that it disallows religious exemptions,” Ferarra said.

The TRO will be operative until October 12, when the federal judge will decide whether to grant a temporary injunction against the mandate.

According to the attorney, the 17 plaintiffs he represents in the case are all healthcare professionals who worked in close contact with COVID patients. Over the past year and a half, some contracted COVID themselves and, like all in their profession, had been hailed for their heroism.

But now, Ferrara said, the unvaccinated healthcare professionals are “portrayed as disease-carrying villains and even heretics by this loopy governor.”

To date, several of the plaintiffs in the case who had previously received religious exemptions have had them restored, Ferrara said, while others are currently having religious exemption requests considered. One plaintiff had his impending termination extended two weeks pending the federal judge’s decision on whether to grant a preliminary injunction.

Ferrara said the governor has “not crossed the line yet,” and that her attorneys sent the Thomas More Society an email confirming that Hochul would abide by the federal judge’s temporary restraining order, “so she can’t intimidate hospitals into refusing to grant or revoking previously granted religious exemptions.”

“This is a situation we’ve never seen before in first amendment jurisprudence,” he said, “But it seems to be part of a trend of increasing lawlessness on the part of the administrative state.”

The attorney estimated that if the judge does issue a preliminary injunction in October, more people in the state who currently face having their positions terminated if they refuse the jab will come forward to request religious exemptions.

“This is a struggle,” Ferrara said. “Obviously this is a struggle that has moved far beyond any legitimate concern about public health. This is a kind of jihad by the governor who has revealed herself to be a religious fanatic. It’s that simple. It comes from God, and we know who the people are who don’t believe that. So go out and harass them, is what she’s saying.”

Ferrara said the governor’s blatantly religious framing of the vaccine issue is evidence that the COVID-19 immunization scheme is not truly about public health.

“She’s pitting her religious view against the Catholics and the Baptists who are among the seventeen plaintiffs in this case, and insisting that everyone follow her view,” the attorney argued. “It would be bad enough if she had never made these statements, but now that she’s made these statements, it’s pretty powerful evidence that what’s at work here has nothing to do with public health.”

The attorney concluded that by attempting to eliminate religious exemption options, the government is “targeting religion.”

“These bureaucrats are saying to themselves, ‘there are a lot of people with religious objections. Unless we close the escape hatch, they will escape our will.’ And that’s what this is all about. The imposition of political will.”

“It’s become a religion,” Ferrara said. “You can’t even say it’s a quasi-religion. [Hochul] has made it explicitly a matter of religious crusading. We must go out and talk to these people who won’t follow God’s will. To quote her again, ‘you know who they are.’ That’s an invitation to start harassing people that don’t believe in God’s will, as discerned by the great oracle of Albany, Governor Kathy.”

Ferrara noted that requesting a religious exemption is a right guaranteed under Title VII of the 1964 Civil Rights Act, which he said “this governor thinks she can just ignore.”

“For the time being at least, and we hope on a permanent basis, the governor’s been told: not so fast,” Ferrara said. “Step back. You crossed the line.”