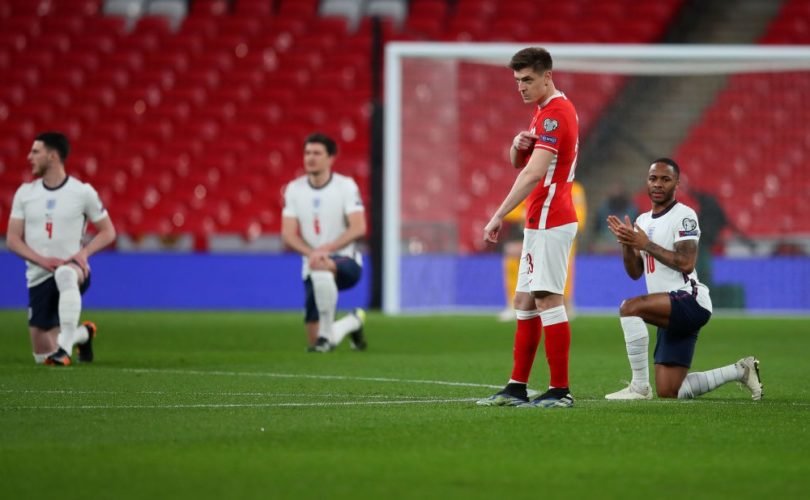 Krzysztof Piatek of Poland points to his respect badge as England’s players take a knee in support of the Black Lives Matter movement prior to the FIFA World Cup 2022 Qatar qualifying match between England and Poland on March 31, 2021 at Wembley Stadium in London, EnglandCatherine Ivill / Staff / Getty

The English team did take the knee, however, leading to many online jokes in Polish suggesting that the English players were apologizing to Poland for perceived historical slights and betrayals during the Second World War.

One popular internet meme showed a photograph of the English players kneeling amidst the standing Polish players and the caption: “March 2021, London, 11 English representatives apologize to the Polish delegation for September ‘39, Tehran, Yalta, and the Post-war Victory Parade.”

Twitter was alive with comments from Poles in both Poland and England, where they form a sizeable minority, over whether or not Poland should have participated in the ritual action. One commentator stated that a Polish man kneels only before God and the woman he wishes to marry.

Early this week, the Czech team likewise refused to “take the knee” at their World Cup qualifier in Wales, instead pointing to anti-racism badges on their uniform sleeves reading “Respect.” The Polish team, too, opted to point to their UEFA (Union of European Football Associations) anti-racism badges.

“Taking the knee” began with American football player Colin Kaepernick in 2016, when he decided to show his opposition to racism by sitting, and then kneeling, during the American national anthem. After Minnesota resident George Floyd died while being restrained by a police officer, the “taking the knee” ritual spread beyond the borders of the United States to Europe and beyond. However, as it is understood as a show of loyalty to the Marxist-inspired Black Lives Matter organization, not all athletes are interested in participating. Others object on patriotic grounds to kneeling during their national anthem or holding their nation accountable for institutional racism.

“I think that the majority of people in Poland are against taking the knee and apologizing for colonialism and racism because Poles never had colonies or pursued racist policies,” Polish journalist Grzegorz Górny told LifeSiteNews via email.

“Between 1795 and 1919 (that is, when England, France, Belgium and other countries were building their colonial empires), Poland wasn’t [even] on the map,” he continued.

“The Polish state was liquidated by Russia, Austria and Prussia (later Germany). Poles were deprived of their sovereignty and treated like second-class citizens throughout the 19th century. Poland was a de facto colony of neighboring powers.”

This is why, Górny added, that Poles do not identify with the legacy of western colonialism. They experienced for themselves what it means to be occupied, persecuted and exploited by so-called “upholders of civilization,” that is, racist colonizers.

Poles also suffered greatly from the racist pseudo-science popular in Nazi Germany, which held that they, and all other Slavic peoples, were sub-human. Valuing Poles only as potential farm laborers, miners, factory workers and domestic servants, during the 1939-1945 occupation, the Germans forbade Poles from pursuing education beyond a very basic educational level. (This is why, for example, the future St. John Paul II had to leave university to work and then to attend seminary underground.) Heinrich Himmler notoriously wrote in 1940 that he thought it unadvisable that Poles be taught how to read.  Quixotically, the German occupiers also kidnapped tens of thousands of Polish children who “looked German” and sent them to Germany for “Germanization.”

Prior to Germany’s Lighting-War against Poland, Polish athlete Maria Kwaśniewska refused to join in the universal Nazi salute at the 1936 Berlin Olympics, and a picture of her standing stone-faced on the winner’s podium has also been making the Twitter rounds.

Poland fought against colonialism and has nothing to apologize for

Meanwhile, Poland also has excellent anti-colonial credentials, thanks to influential Polish figures whose own experience of oppression by foreign powers led them to fight it elsewhere.

“One Polish national hero is Maurycy Beniowski, who was sentenced to exile in Siberia by the Russians for taking part in the [first, 1768] independence uprising,” Górny told LifeSiteNews.

— Article continues below Petition —
PRAY IN REPARATION: Sony's new movie 'The Unholy' blasphemes the Blessed Virgin Mary
Show Petition Text
5673 have signed the petition.
Let's get to 6000!
Thank you for signing this petition!
Add your signature:
Show Petition Text

“There he caused a revolt and stole a ship that was sailing to Africa. He then reached Madagascar, where he was made king by the indigenous people and fought against French colonizers.”

Another national hero is Józef Korzeniowski, better known as Joseph Conrad, the author of Heart of Darkness and fierce critic of Belgium’s horrific mistreatment of Africans in the Congo. Górny observed that Conrad’s writings have an “entirely different character” from those of Britain’s Empire-booster Rudyard Kipling, for example. Conrad, too, was inspired by his own experience of oppression by the Russians.

Still another Polish hero is Tadeusz Kościuszko, who led an uprising in Poland against the Russians after fighting for the Americans in the American Revolutionary War against England. Poles across the world were outraged when BLM activists vandalized his statue in Washington DC last June. Kościuszko had, in fact, used his salary as an American general to liberate and educate enslaved African Americans.

“In Polish history there is not a single person who is a representative of the colonialism and imperialism of the white man in other continents,” Górny said.

“Therefore, Poles do not see any reason why they should apologize for what is not their fault.”

Who won the game? England won the soccer match 2:1, and are now well placed to secure a place in next year’s FIFA World Championships in Qatar, where slavery still exists.