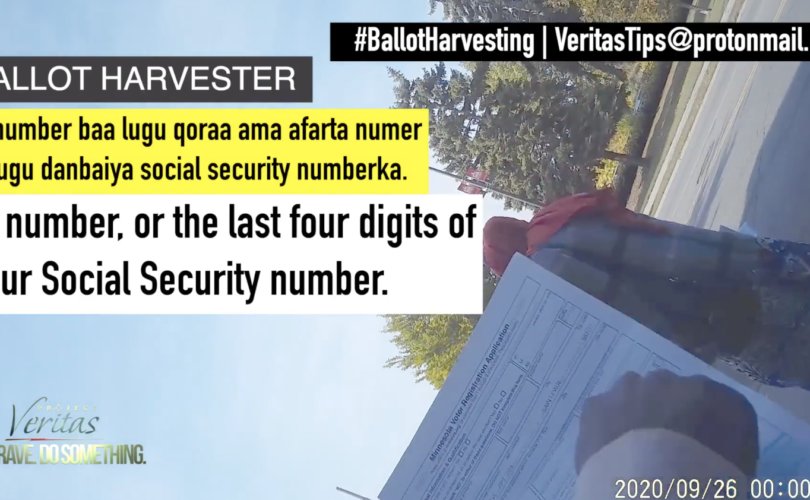 MINNEAPOLIS, Minnesota, September 29, 2020 (LifeSiteNews) ― A ballot-harvester was caught paying for a man’s vote on an undercover video published by Project Veritas.

In Part 2 of an explosive investigative report on ballot-harvesting and voter fraud in the city of Minneapolis, Project Veritas investigative reporter James O’Keefe published a video of one Somali-American man paying another for his voter registration form.

“The tape shows a man buying a registration form for an absentee ballot for a voter, giving him ‘pocket money’ of $200, and expecting to collect his ballot when the voter receives it,” said O’Keefe.

In the video, the buyer instructs the voter in Somali how to fill in the registration form. O’Keefe tweeted that within 20 minutes of its publication, the video was viewed 100,000 times. As of press time it has been viewed 4.5 million times.

Project Veritas seems to have received this and other recordings from a whistleblower and Somali-American insider named Omar Jamal. Disturbed by the implications of voter fraud for the USA, Jamal “secretly recorded dozens of conversations in and around the Somali community in Minneapolis to expose a rampant voter fraud scheme,” O’Keefe explained.

“It’s an open secret [in] that everybody know it, but they don’t talk about it,” said Omar Jamal.

“80,000 of [Somali] immigrants’ votes will swing the election to one side [in Minnesota],” he continued.

In a second secret recording given to Project Veritas, an alleged ballot-harvester, Osman Ali Dahquane, admits to receiving $800 for his vote and for bringing 40 other people to vote-buyers who were also all paid $800.

Osman Ali implicated Rep. Ilhan Omar (D-MN), her rival Antone Melton-Meaux, and Minneapolis City Councillor Jamal Osman in the fraud. He admitted to double-crossing Melton-Meaux by taking his money and voting for Ilhan instead. Osman Ali said also that those who sell their votes don’t care that it’s illegal. He himself shook off the implication of personal wrong-doing by saying, “I was given money, and I was told to vote.”

Nevertheless, Osman Ali admitted that the system is “very, very corrupt” and that he and his fellow fraudsters “are in big trouble if they come after us.” But he also said that nobody would be afraid of being caught until people go to prison.

A female source, someone who allegedly previously worked with Rep. Omar, alleged that the far-left congresswoman had herself “come up with” the fraudulent pay-for-vote system. She said that there are people working at the polling stations who also work for Rep. Omar. The congresswoman’s workers are allegedly ballot-counters and apparently even manage the precinct.

“They do all of it,” the anonymous informant claimed.

Another anonymous source, allegedly himself a ballot-harvester, was recorded saying that people from Ilhan Omar’s campaign go from door to door in the Minneapolis Somali community to strongarm them into voting for her. He alleged that, posing as translators, Ilhan’s compaigers go with Somalis into the polling booths, where they do the actual voting.

A final source alleged that the vote-for-pay scheme on Ilhan’s behalf is being financed by Palestinian-American businessman Basim Sabri, in exchange for the congresswoman’s efforts to end American financial support for Israel.

Congresswoman Ilhan Omar’s senior communications director, Jeremy Slevin, denied that she is involved in voter fraud and suggested that there is a right-wing conspiracy against the democratic process.

“The amount of truth to this story is equal to the amount Donald Trump paid in taxes of ten out of the last fifteen years: zero,” he stated to the media.

“And amplifying a coordinated right-wing campaign to delegitimize a free and fair election this fall undermines our democracy,” he claimed.

One million Americans have already voted in the 2020 presidential election. In ultra-liberal Fairfax County, Virginia, at least 1,000 voters received two absentee ballots in the mail.