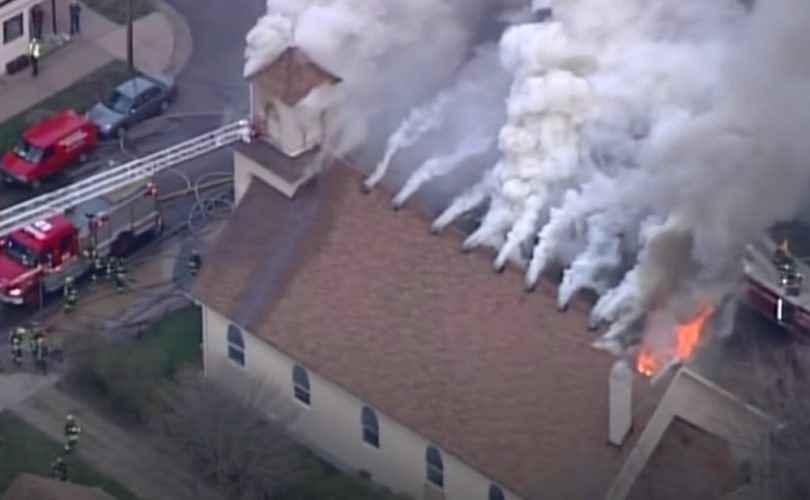 Firefighters were summoned to the Sacred Heart of Jesus Polish National Catholic Church, which is not part of the Archdiocese of St. Paul and Minneapolis, shortly before 7:00 p.m. There were still people in the church when the firefighters arrived, but they were immediately evacuated.

Despite the firefighters’ efforts, the roof and tower of the century-old building collapsed, and the interior suffered heavy damage. According to one news report, some of the antique stained-glass windows were salvageable.

According to CBS, Minneapolis Fire Department Chief Bryan Tyner said that the building was going to be “a total loss.”

“Because of the construction of the church, the fire spread quickly into the attic area and it eventually burned through the roof, so unfortunately, we weren’t able to save this one,” he said.

“It’s going to be a total loss, but we were able to avoid any loss of life or any injuries.”

Michael Kutek, the son of the church’s pastor, the Rev. John Kutek, has begun a GoFundMe page to help rebuild the church. Kutek stated that the fire started “unexpectedly” and that it soon grew out of control. The cause of the fire has not yet been determined.

Nevertheless, some commentators – notably on Twitter – believe that the fire is connected with the unrest that has again blazed up in Minneapolis, thanks to the ongoing trial of police officer Derek Chauvin. Chauvin who has been charged with second-degree unintentional murder, third-degree murder, and second-degree manslaughter in the death of George Floyd. Early on Sunday morning, unknown assailants fired upon a Minnesota National Guard and Minneapolis Police Department neighborhood security team.

Meanwhile, there have been daily – and nightly – protests outside the Hennipen County courthouse where the trial is taking place. The courthouse is an 11-minute drive from the Polish National Catholic church.

Commentators have blamed Rep. Maxine Waters (D-CA) for stirring up tensions in Minneapolis.

“Oh no, not manslaughter. This is guilty for murder. I don’t know whether it’s in the first degree, but as far as I’m concerned it’s in the first degree,” Waters told a group of Black Lives Matter protesters in Brooklyn Center, Minnesota this weekend, the Media Research Center reports. If he isn’t convicted by the jury, the California lawmaker continued, “We’ve got to stay on the street and we’ve got to get more active, and get more confrontational. They’ve got to know that we mean business.”

Chauvin’s attorney used the remarks to “[move] for a mistrial” and argue “that Waters was prejudicing the jury in favor of conviction, given that an acquittal might lead to rioting,” Reason explained. Although Judge Peter Cahill, who is presiding over Chauvin’s trial, denied the motion for mistrail, he said Waters’ comments “may have given you something on appeal that may result in this whole trial being overturned.”

Locals told the Daily Caller that if Chauvin is acquitted, they expect Minneapolis will “burn,” and “businesses are gonna burn again.”

One local noted it’ll “be chaos either way.”

“It’s harder to imagine anything more inappropriate than a member of Congress flying in from California to inform local leaders, not so subtly, that this defendant better be found guilty or else there’ll be big trouble in the streets,” he said on Monday.