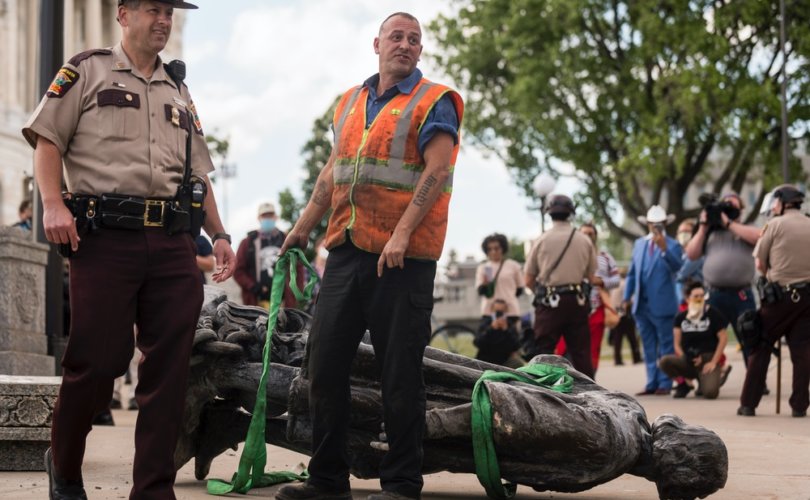 A statue of Christopher Columbus, which was toppled to the ground by protesters, is loaded onto a truck on the grounds of the State Capitol on June 10, 2020 in St. Paul, Minnesota.Photo by Stephen Maturen / Getty Images

SAINT PAUL, Minnesota, June 22, 2020 (LifeSiteNews) — The statue of Christopher Columbus in Saint Paul that protesters ripped down earlier this month should be restored to public view, says the public policy office for Minnesota’s Catholic bishops.

Activists led by members of the American Indian Movement (AIM) used ropes to topple the 10-foot bronze statue of Columbus in the state Capitol from its granite pedestal on June 10, reported the Minnesota Reformer.

Protestors then danced around the statue singing and drumming.

People dance around the statue. pic.twitter.com/6gIPTe9nBs

The helmeted state troopers responsible for security at the Capitol stood at a distance and did not try to stop the vandalism, which came in the wake of nationwide riots and demonstrations sparked by the May 25 death of George Floyd, reported TwinCities Pioneer Press.

The protesters included Dakota and Ojibwe Indians, who said they see Columbus as a symbol of genocide against Native Americans, and that they made many attempts to remove the statue by legitimate means to no avail, that outlet reported.

“For healing to happen, this needed to happen,” said Mike Forcia, chairman of the Twin Cities American Indian Movement and a member of the Bad River Band of Ojibwe. “It was here for far too long. It’s a slap in the face to all Native people and all people of color.”

No one was arrested during or after the incident, but state troopers told Forcia he could be arrested in a few days on charges of destroying public property, Reuters reported.

Minnesota’s Democrat Lieutenant Governor Peggy Flanagan, a member of the White Earth Band of Ojibwe and the highest ranking native woman elected to executive office, said in a statement that the arrival of Columbus “set in motion centuries of violence and genocide against the Indigenous people who already lived here.”

Added Flanagan: “I can’t say I’m sad the statue of Christopher Columbus is gone. I’m not… . All Minnesotans should feel welcome at the Minnesota State Capitol, and our state is long overdue for a hard look at the symbols, statues and icons that were created without the input of many of our communities.”

But Jason Adkins, executive director of the Minnesota Catholic Conference (MCC), has a different view.

LifeSiteNews asked Archbishop of Minneapolis and Saint Paul Bernard Hebda for a comment on the incident, and his office forwarded the request to the MCC, which is the “public policy voice of the Catholic Church in Minnesota,” according to its website.

Hebda is the MCC’s president, and its members are seven active and three retired bishops of Minnesota.

“The negligent failure by public officials and safety officers to protect the Christopher Columbus statue—a statue erected to celebrate greater inclusiveness of Italians in Minnesota—should be a cause of concern for all Minnesotans, regardless of their views on Columbus himself,” Adkins told LifeSiteNews in an email.

“We cannot allow persons or activists of politically favored groups to destroy property, public or private, simply because an object or building causes offense,” he said.

“The celebration by many in the community of the statue’s lawless removal also shows the prevalence of fake history. Columbus is not a canonized saint, but he is not a villain, either. As described by Pope Leo XIII, his motives were [exemplary], and it was an extraordinary achievement to connect the peoples of two hemispheres,” Adkins said.

“To say Columbus was a perpetrator of genocide makes a mockery of the term,” he added.

“I have made inquiries to ensure that the process for restoring the Columbus statue to public grounds is transparent. The statue should be restored to public view,” Adkins said.

Also on June 10, protestors pulled down a Columbus statue in Byrd Park in Richmond, Virginia, covered it in paint, set it on fire, and threw it into a lake, and then attacked an NBC12 reporter and demanded he leave the scene, NBC12 reported.

The same evening, unidentified vandals decapitated the marble statue of Columbus in Boston’s North End, while in Miami, police arrested seven people at a demonstration after identifying them from surveillance videos as the individuals who vandalized statues of Columbus and explorer Juan Ponce De Leon, CBS News reported.

The protestors sprayed red paint on Columbus’s hands and face, as well as painting a hammer and sickle, images of fists, the name of George Floyd, and Black Lives Matter on the base of the statues.

A police statement said officers were at the demonstration to find those responsible for vandalizing the statues and that “while initiating the arrests,” several protesters assaulted them and damaged a police vehicle.

Miami’s Chief of Police Jorge Colina said in a statement that while police support non-violent protests, “there will be zero tolerance for those who hide behind the peaceful protesters to incite riots, damage property, and hurt members of the public or our officers,” The Hill reported.

LifeSiteNews asked Boston’s Cardinal Sean O’Malley of Boston, Richmond’s Bishop Christopher Knestout, and Miami’s Archbishop Thomas Wenski of Miami what they made of these incidents. Representatives for Knestout and Wenski said the prelates had no comment. O’Malley’s office did not respond.

Over the weekend in California, protestors tore down two statues of St. Junipero Serra, who was canonized by Pope Francis on U.S. soil in 2015.

The oft-cited reports and allegations of Columbus’s brutal treatment of the indigenous peoples of the lands he claimed for Spain stand in marked contrast to the late Father John Hardon’s vigorous defense of the Genoese adventurer, whom he lauded as “the destined herald of the true faith to half of the human race.”