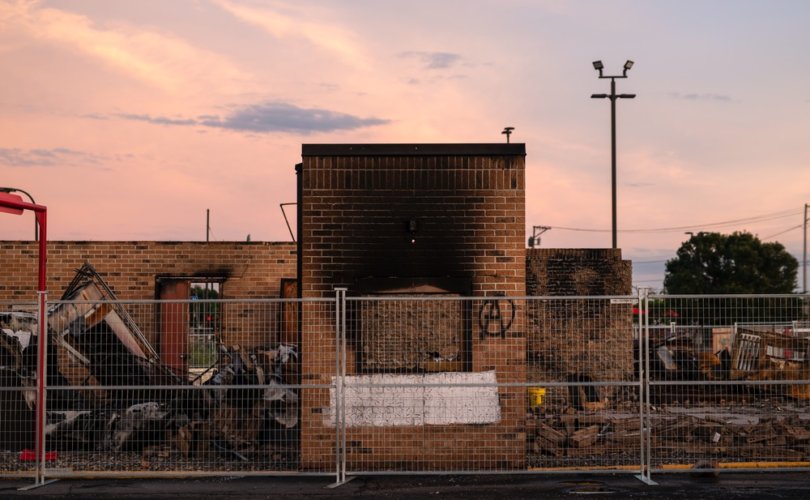 A view of a destroyed Wendy's restaurant near the Third Police Precinct Station on June 21, 2020 in Minneapolis, Minnesota. Over 1500 buildings were damaged during the unrest that followed the killing of George Floyd by members of the Minneapolis Police Department on May 25Stephen Maturen / Getty Images

MINNESOTA, June 25, 2020 (LifeSiteNews) — A Minnesota lawmaker has said that he believes that Antifa and Muslim organizations plan to “police Minneapolis under Muslim rule,” as he warned that communism is moving into the cities of Minneapolis and St. Paul.

The comments were apparently made last week by Minnesota House Rep. Steve Green (R-Fosston) and reported by his fellow state legislator Rep. Matt Grossell (R-Clearbrook) during a confab with the Hubbard County Board.

Responding to a comment by board chair Chair Christenson that “while there is nationwide talk of defunding police departments, she has not seen an alternate plan for safety” Green reportedly said that he believes “Antifa and Muslim organizations plan to ‘police Minnesapolis under Muslim rule.’”

Green also warned that “some [Minnesota] House representatives have a bill that would impose eminent domain on every business destroyed during the George Floyd protests, the city would purchase them and ‘only sell back to people under conditions’ imposed by the city.”

“What you’re looking at, in my humble opinion, is communism moving into Minneapolis and St. Paul,” Green said.

LifeSiteNews contacted Green and Grossell to ask if they could provide any further comment on their remarks, but has not received a response.

U.S. Rep. Jim Hagedorn (R-MN) said earlier this week that “The Democrat 'Black Lives Matter' Party, along with armies of rioters, are at war with our country, our beliefs and western culture.”

Hagedorn made the comments in a Facebook post responding to calls from Shaun King, a leading voice in the Black Lives Matter (BLM) movement, calling for the destruction of images and statues of a “white” Jesus and Mary his mother.

“Their radical movement is orchestrated and growing,” Hagedorn continued.

‘We must never let them take power. We must stand up and defend our country, our nation’s identity, our Judeo-Christian values and our American way of life.”

Minnesota, where riots which spread across the country first broke out following the death of George Floyd in Minneapolis, has a number of high-profile Muslim politicians who are both passionate advocates of socialism and dismantling the police.

Leftist House Representative for Minnesota Ilhan Omar, a Muslim who is also pro-abortion and a vocal advocate for LGBT causes, said earlier this month that policing methods in the state “have to start from scratch.”

I refuse to accept even a penny from the Fraternal Order of Police (and other police-only unions) — unlike labor unions that fight for more humane and dignified workplaces, police unions fight to function with impunity and harm communities: https://t.co/3ATz38fkku

You run, they shoot you
You're on the ground, they choke you
You sit in your car, they shoot or shock you
You march, they pepper spray or beat you
You say “I can't breathe,” they ignore you
These things MUST change about policing-especially POC. That's why the calls to defund.

Omar is set to preside over the U.S. House floor for debate today over the Democrats’ Justice in Policing Act.

In an article published earlier this month in Crisis magazine, William Kirkpatrick claims that Minnesota Attorney General Keith Ellison “embodies both the extremes of liberalism and the extremes of Islamism.”

Kirkpatrick notes that Ellison, who is also Deputy Director of the Democratic National Committee, was supported for his candidacy for Congress by the Communist Party USA; has praised Fidel Castro and other leftist heroes; and was a member of the Congressional Progressive Caucus.

“On the other hand, his radical Islamist credentials are just as solid,” Kirkpatrick continues.

“A convert to Islam, Ellison took his oath of office on the Koran at the photo-op re-enactment of his swearing-in ceremony. And he has disparaged moderate Muslims as “Uncle Toms,” which suggests that Ellison himself could, perhaps, be categorized as an immoderate Muslim.”

Ellison has also implied his support for Antifa. In January 2018, in a now deleted tweet, he posted an image of himself with The Anti-Fascist Handbook, along with the words “At @MoonPalaceBooks and I just found the book that strike fear in the heart of @realDonaldTrump.”

Ellison’s son, Jeremiah, has in the past month declared his unequivocal support for Antifa.

“I hereby declare, officially, my support for ANTIFA,” he wrote on Twitter.

“Unless someone can prove to me ANTIFA is behind the burning of black and immigrant owned businesses in my ward, I’ll keep focusing on stopping the white power terrorist THE ARE ACTUALLY ATTACKING US!” he continued.

I hereby declare, officially, my support for ANTIFA

Unless someone can prove to me ANTIFA is behind the burning of black and immigrant owned businesses in my ward, I’ll keep focusing on stopping the white power terrorist THE ARE ACTUALLY ATTACKING US! https://t.co/m6jxtDYmTi

Jeremiah Ellison, himself a Minneapolis City Council member, has been likewise open about his aim to dismantle the police. “We're dismantling our police department. And we won't be silent. We'll be loud. We'll fight. We'll win,” he stated on social media earlier this month.

When police kill someone in Colombia, there's a saying:

“For those who have died
Not one minute of silence
We must always carry on the struggle and fight!”

And we won't be silent.

“The possibility that we now stand on the brink of revolutionary change is difficult to entertain,” Kirkpatrick concludes.

“In America, we have grown accustomed to long periods of internal peace and prosperity. When disruptions occur, we assume that we will soon return to normalcy. But that’s not always the case in history. ‘Current trends’ are often replaced by new, radically different trends.”