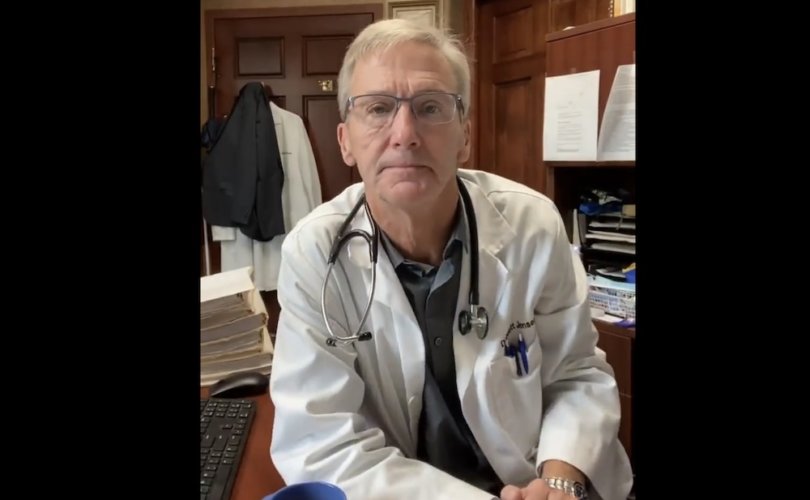 (LifeSiteNews) – A conservative physician running for governor of Minnesota says his medical license is being investigated due to his outspoken dissent from left-wing orthodoxy on COVID-19.

Dr. Scott Jensen is a family physician and former Republican member of the Minnesota State Senate. Over the past year, he has been a vocal critic of COVID-19 lockdowns and related policies; last July, the Minnesota Board of Medical Practice investigated him for criticizing the U.S. Centers for Disease Control & Prevention’s (CDC’s) guidelines on classifying COVID deaths, which he said could be artificially inflating the pandemic’s death toll.

On Tuesday, Jensen released a video revealing he has just received a notice that the board is again investigating his medical license for what he says is the fifth time. In the video, Jensen addressed the notice’s allegations point-by-point:

“I am problematic because I called for civil disobedience in regards to the press conference that President Biden issued on September 9 that he never followed up on,” Jensen said, referring to the fact that Biden announced the mandate in September but has yet to issue formal regulations to implement it. “He never certified that as an executive order nor has he given to OSHA their instructions by which they can make rules to determine how to implement what he said he wanted to happen in a press conference.”

Some have speculated the administration is dragging its feet on an actual mandate in hopes of intimidating businesses to comply without actually putting something on the books that could be struck down.

“It’s alleged that I’m not vaccinated, and I’m not, I’ve been very clear about that. I have a plethora of antibodies because I’ve recovered from COVID,” Jensen continued. Numerous studies have found that immunity from prior COVID infection is longer-lasting and more durable than immunity from COVID vaccination.

“I’m inappropriately recommending against children wearing masks in schools. Last I checked, school boards are making those decisions. I have my opinions, and I’m entitled to those,” Jensen went on. “I’m politicizing public health, really? What about [University of Minnesota Center for Infectious Disease Research & Policy director] Mike Osterholm and [White House COVID-19 czar] Tony Fauci who say don’t wear masks, don’t wear masks, don’t wear masks, and then all of a sudden they get religion and wear masks?”

Fauci publicly and privately suggested masks were ineffective in the early days of the pandemic; now he fully endorses masking (and more), despite studies indicating their ineffectiveness.

“‘We have 19 years of data that says masks don’t do the job,’ I was quoted as saying,” Jensen continued. “I have said that. And the fact of the matter is from 2000 to 2020, we thought that masks didn’t help. But now evidently they do.”

Jensen next tackled a simple misquote; the complaint claims “I’ve been telling followers that doctors and hospitals are falsifying death certificates; I’ve never said that.”

“It’s alleged that I promoted the use of ivermectin,” Jensen went on. “That’s a decision between a patient and a doctor. And I think Joe Rogan might have weighed in on that. And I hear that there are several hundred members of Congress that may have also benefited from ivermectin.”

Dr. Pierre Kory of the Front Line COVID-19 Critical Care Alliance alleges that a “highly credible source” told him that “Between 100-200 United States Congress Members (plus many of their staffers & family members)” have been treated with ivermectin for COVID-19, with none requiring hospitalization.

Rogan is a popular podcaster who took ivermectin (among other therapeutics) to treat his COVID infection, for which he was misrepresented by CNN as having taken “horse dewormer.” Like many drugs, ivermectin has multiple applications, and while one of them is for animals, human doses for human ailments are well established and were not controversial until the drug started gaining notice in the context of COVID-19.

Jensen concluded by declaring that he and his wife are undaunted by such attacks: “The worst transgression that we can make is if we want to turn back. We’re not gonna turn back. I get to run for office if I choose. And people who want to politically weaponize the board of medical practice, have at it. I can’t stop you. But I’ve said it before and I’ll say it again: If it can happen to me, I think it can happen to you.”

According to Jensen’s campaign website, he is pro-life, wants to “restore election integrity,” and is running on a vow to “never let lockdowns happen again.”