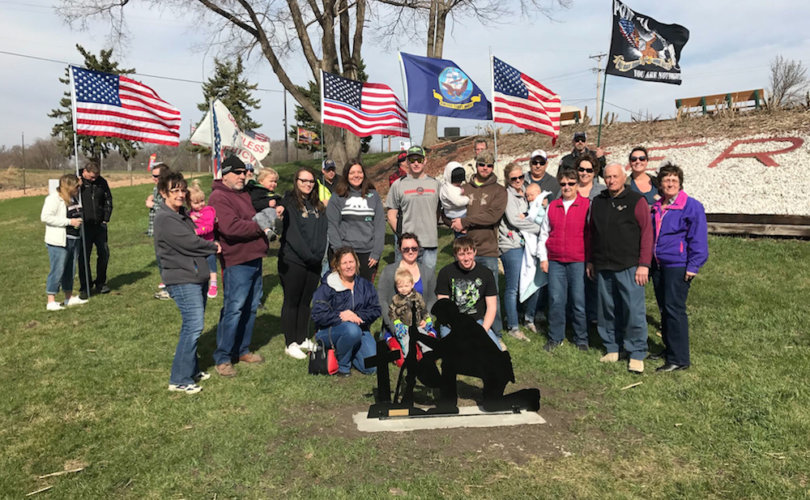 Belle Plaine residents gather for a ceremony to reinstall the veterans' memorial.

BELLE PLAINE, Minnesota, April 12, 2017 (LifeSiteNews) – A war memorial containing a cross is back up at Veterans Memorial Park after an atheist complaint over a religious symbol on public property.

A compromise between the city, its citizens and the local veterans’ group created a limited public forum space in the park to reinstall the memorial.

The steel sculpture is a silhouette of a World War II U.S. soldier kneeling with his helmet off, rifle in hand, beside a simple cross mourning a fallen comrade.

It was created and donated by veteran and late former Belle Plaine resident Joe Gregory, and erected in August 2016 before Gregory passed away in October. Gregory was a U.S. Marine who fought in the South Pacific during World War II and was part of the occupation force in Japan after the war.

The memorial to Belle Plaine’s war dead wasn’t up long before a resident complained to police in mid-August about the legality of a cross on public property. Wisconsin-based Freedom From Religious Foundation contacted the city as well about removing the cross.

“It isn’t just a constitutional violation, but it sends a message of exclusion to non-Christians,” Annie Laurie Gaylor of the Freedom From Religion Foundation told the NBC station in January.

To avoid litigation, the city advised the Belle Plaine veterans’ group that the cross must be removed, which they reluctantly did.

“We didn’t have any option the way they said it,” Larry Ruehling, commander of the local VFW post, said in a report from the Belle Plaine Herald. “They’re caught between either we do it (remove the cross) or we get sued. It’s a very sad thing.”

One of the veterans had to saw the cross off the memorial.

Hundreds of Belle Plaine citizens pushed back by placing in their yards either a wooden cross similar to the one on the memorial or a metal replica of the memorial itself.

The fight also entailed creation of Defend Veterans Park Facebook page that stated, “A group of out-of-state atheists demanded a statue of a vet be removed from a city park. Our veterans defended us. Now we need to defend them.”

Belle Plaine resident and LifeSiteNews Director of Public Relations Andy Parrish assisted the veterans in communicating with the city and obtained help from Alliance Defending Freedom to establish the limited public forum space in the park.

The sculpture, which was removed for Joe Gregory’s son-in-law and grandchildren to solder the cross back on, has come to be affectionately known as “Joe.” It was returned to its new home in the park this past Saturday.

Citizens, veterans and members of Gregory’s family gathered for the event.

“I am so happy for the Gregory family and the city that Joe is back in his rightful place,” Parrish said.

“However, litigation from the hate group Freedom From Religion could still happen,” he continued.

Parrish said if it comes to that, an “added bonus” will be that the identity of those behind the complaint would be made public through the discovery phase.

“If they do litigate, we will beat them again,” Parrish said.

Bartels explained his perspective on the matter.