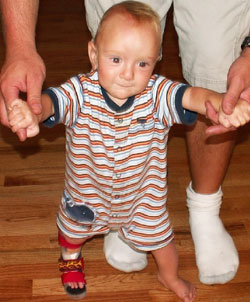 OLNEY, Maryland, February 6, 2012 (LifeSiteNews.com) – Kristin Page woke up suddenly in the middle of a warm May night, feeling soaking wet. A few months ago, the mother of three had been afraid to take a pregnancy test when she missed her period. Kristin already felt stretched to the limit with her energetic children, aged 2 through 7, but her husband Matt had encouraged her that together they would “figure it out.”

Kristin vigorously shook Matt awake. Now 13 weeks pregnant, she had come to accept with joy the new life within her, wondering what this little bundle would bring into their blossoming family.

“My waters must have broken,” she whispered in a panic.

On the phone, Kristin’s doctor advised her to visit the hospital first thing in the morning for an examination. He told her that such a young baby could not survive without any amniotic fluid.

An ultrasound revealed that there was no amniotic fluid, but surprisingly, the baby’s heart was still beating. The doctor told Kristin that her baby would die and instructed her to go home to rest, pray and wait for the baby to pass.

A few days later, Kristen returned for another ultrasound. To everyone’s surprise, the baby was still alive, and with a “super strong” heart beat.

A different doctor from the first told the parents exactly how dire the situation was. “No water, no lungs, no life,” she said, and encouraged Kristen and Matt to get an abortion and avoid running the increasing risk of serious infection.

A few days later, an expert in high-risk pregnancies told the parents flatly that the pregnancy would come to an end on its own. The expert counseled the parents to abort, suggesting that if waiting to miscarry seemed too unbearable for Kristen, then she could immediately opt for the dilation and curettage (D & C) procedure.

Now at 16 weeks, Kristen went to see a different specialist. Another ultrasound revealed a powerful heartbeat. The baby was thriving.

The specialist told Kristin that she was not being fair to her husband and other children if she were to leave them without a wife and mother all for the sake of a child that would not even survive more than a day. “Your only option is to terminate,” he said.

Kristen and Matt left in tears, devastated by the bleakness of their situation.

Google searches only made them more dismal. Everywhere they looked, they found that babies with no amniotic fluid had a zero percent chance of survival.

With nothing left to lose, Kristen and Matt decided to let God be in control. They told God that he could take their precious baby whenever he so wished.

“We felt that we were given no hope. Yet, against all odds, we found the strength to just say ‘so be it’ and allow what was certainly going to happen (at least in our eyes) happen,” they said.

“If He wanted him, then I would be at peace knowing it was God’s choice and not mine,” said Kristen.

The tiniest ray of hope broke through the gathering darkness when the parents found out about Tepeyac Family Center in Fairfax, Virginia, where doctors believe in the right for all children to be born, even despite dire prenatal circumstances. It was here that Kristen and Matt found support for their decision to let God handle the pregnancy.

At 17 weeks, the bleak situation had not changed. But, defying all medical expectations, an ultrasound revealed a thriving baby who appeared to be simply content resting gently in the hollow cavity of Kristen’s womb.

Kristen was ordered to a strict bed-rest except for weekly checkups at the family centre.

Weeks went by. At every ultrasound, Kristen expected to hear the news she dreaded the most, but the baby would not let go of its grasp on life.

“Every day brought tears to my eyes to think that I was lying there only for the baby to live a mere few hours, or couple of days at most,” said Kristen.

At 26 weeks, Kristen was moved to Fair Oaks Hospital, an hour away from her husband and children, where she was continually monitored, administered various medicines, and hooked up to an IV machine. Her baby continued to thrive.

At 32 weeks and 3 days, the baby’s heartbeat suddenly changed. The doctors suspected that the baby was distressed, but waited a day before doing anything.

An ultrasound the next day revealed a lethargic baby with an irregular heartbeat. Kristen was immediately prepped for an emergency caesarian-section. She was scared about losing her baby.

“I knew he was safe inside me, but outside me he wouldn’t be able to breathe. I prayed for God to give us but two days with our baby so we could tell him how much we loved him.”

A completely blue boy was pulled from Kristen’s womb. He was immediately baptized by the Catholic doctor who delivered him. Kristen’s husband cut the umbilical cord. All had prepared for the worst, but not for what happened next.

“Then, we heard the screams,” said Matt – the beautiful thrilling screams of a child who is pitifully calling out for his mama.

“They let me see him and let Matt hold him for a brief minute and then whisked him away,” said Kristen. The baby had pneumothorax, a collapse of the lung, and needed to be put on oxygen. He also suffered damage to his right leg and foot, probably from resting on them exclusively during Kristen’s bed rest.

Joey spent a total of seven weeks undergoing extensive testing in the hospital’s Neonatal Intensive Care Unit whereupon he was released with a clean bill of health.

“He is bouncing, funny, and so amazing! He brings the most joy to all of us!” said his parents. “He is so happy with us as he smiles and laughs. His brother and sisters adore him.”

Both Kristen and Matt believe that their son is “nothing short of a miracle.”

The happy parents know now with certainty that no one on earth can predict the future. “Evidence might show a nearly fatal diagnosis, but ultimately God decides. It is out of human control.”

“We look at Joseph everyday and thank God we chose to keep him! He is a blessing and a much-loved member of our family. We all know he is special.  You can still see how his face sinks in a bit from being squished and his nose is somewhat flattened.”

“But really, only we can tell.”

Joseph, now five, recently started pre-kindergarten where his teachers told Kristen that she needs to stop spoiling him and give him more serious consequences for his actions. Kristen says that Joey is the opposite of a “serious” child, and that he is always being “super silly.”