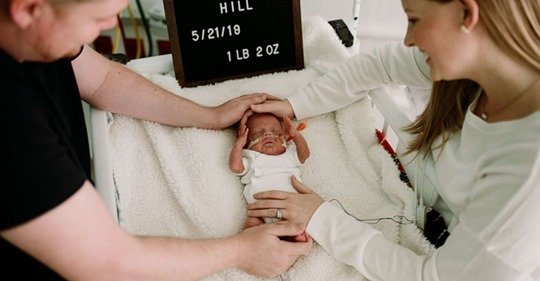 “When his entire hand fits around your fingernail,” Jessica Hill said, “it makes you realize just how precious life is.”

After her water broke unexpectedly at a doctor appointment, Jessica was rushed by ambulance to the hospital, where she gave birth to Finn via emergency C-section.

Finn was then moved to the Orlando hospital because he needed a special breathing machine, Chris Hill told WFTS.

“All I wanted to do was pick him up and go home,” she told the news station.

The Lakeland, Florida, residents had wrestled with infertility for nine years before Jessica Hill became pregnant after adopting two embryos. She sadly lost one of the babies around nine weeks and was later put on bed rest because of a large blood clot.

After her water broke, doctors discovered her placenta was detaching, making the C-section necessary to avoid Finn going into distress.

“That thing that you've been praying for … trying for and asking for … finally happened,” Chris Hill said, “and then you say, well, it's not over yet because he's premature and we don't even know if he's going to make it.”

A micro-preemie is a baby born weighing less than 1 pound, 12 ounces, or before 26 weeks’ gestation.

Babies who are born before 37 weeks’ gestation are considered to be premature, or preterm, as the pregnancy and parenting resource site VeryWellFamily.com explains, with micro-preemie babies the most premature of all.

At Finn’s gestational age of 24 weeks, 66 percent to 80 percent of the babies born will survive, according to the report.

Micro-preemies face extended stays in the NICU, and although many extremely premature babies will have no long-term effects of their prematurity, others will have significant health problems throughout their life.

Finn’s parents documented the moment the family left the hospital for home with cellphone video.

The baby boy was still on oxygen at home as of the ABC report’s airing, but the Hills are hopeful that Finn will gain weight.

“He weighed 5 pounds, 7 ounces when we brought him home,” said Jessica Hill.

“He's just under that now, but that's OK. We're getting there.”

The family has chronicled Finn’s story on a Facebook page named “Fighting Finn,” and various media outlets have covered his battle for life.

“Loving life at HOME,” they said in a September 17 post. “We are working hard to make sure his glucose levels don’t drop and he eats enough to gain weight.”

“It’s a bit of a battle, but we are hopefully getting there,” they said. “We would hate for this peanut to be readmitted.”

The Hills are facing medical expenses and other financial strains, and a GoFundMe page has been established to help them as they continue to help Finn fight.

Jessica Hill said, “We just hold life so precious, and to watch a premature baby fight for their life, it's extremely inspiring.”