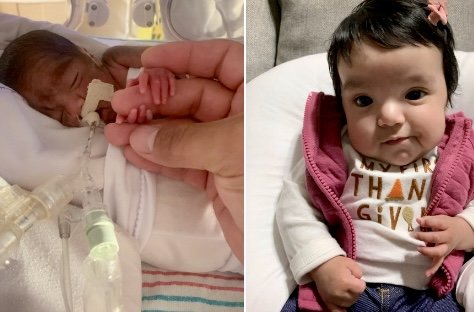 A baby born at 22 weeks in April recently went home from the hospital.Twitter

(LifeSiteNews) — A baby girl born at only 22 weeks in April surpassed doctors’ expectations and survived to make it home in time for the holidays, prompting one physician to call her a “miraculous” case.

Baby Jimena “JC” Macias, born weighing only 1 pound, 9 ounces, was expected to have a less than 50% chance of survival after she was born before 24 weeks, which is now considered the general age of viability.

In fact, 22 weeks is generally considered the earliest gestational age at which babies can survive outside the womb, although even that standard may be shifting, as world records for earliest born babies to survive premature birth were set in 2020 at 21 weeks and two days and then 21 weeks and a day.

“On day one, day two, day 30 … I didn’t think it would be possible to spend the holidays together,” JC’s mother, Juana Gallegos, told KHOU 11. “God had other plans.”

When Gallegos found herself in labor almost five months early, she said doctors told her they “weren’t going to be able to resuscitate her or be able to do anything for her if she was born there, at that time, that early,” recalled her mother, Juana.

She was transferred to Memorial Hermann hospital in Shenandoah, Texas, which has a level III NICU, to give her daughter the special care she needed. JC spent 112 days in the neonatal intensive care unit, where she received nutrition through an IV in her umbilical cord and breathing support with a ventilator.

With the help of continued physical therapy, JC was able to make it home to spend Thanksgiving and Christmas with her family, and doctors say she is meeting her milestones.

She went home from the hospital in time to spend Thanksgiving with family.

Can’t wait to share her story at 4!#khou11 pic.twitter.com/U4BiaMXCWA

“While I wish this story would happen with every baby born this early, it’s not possible,” neonatologist Dr. Rebecca Ballard told KHOU 11. “Not to think her story represents every baby, but it makes it so much more miraculous that it happened.”

The left-wing Washington Post has observed that the age of viability has been decreasing by about one week every 10 years as technology advances. WaPo noted that “several groundbreaking studies published in the past few years have challenged” the general state and medical consensus of 23-24 weeks as the age of viability in favor of a revised viability standard of 22 weeks.

One such study from the University of Iowa in 2019 found that 64% of 22-week babies and 82% of 23-week babies born alive, for whom parents requested resuscitation, survived to leave the hospital.

Two babies have relatively recently set world records for earliest premature births to survive in close succession: Richard Scott William Hutchinson was born on June 5, 2020, after just 21 weeks and two days; one month afterward, on July 5, 2020, Curtis Means was born at 21 weeks and one day.