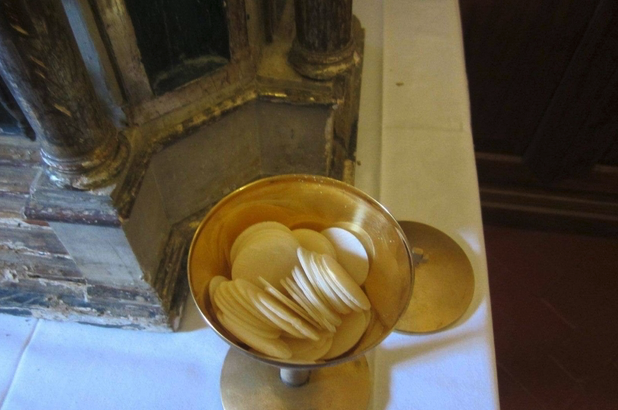 ROME, February 27, 2018 (LifeSiteNews) — The parish priest who discovered 40 ‘miraculously’ preserved consecrated hosts in a tabernacle retrieved from the rubble 16 months after a devastating earthquake hit central Italy, has said the hosts are now being exposed for Eucharistic adoration.

The priest, Don Angelo Ciancotti, also said the local bishop is preparing to present the case for the miracle to the Vatican’s Congregation for Divine Worship.

Don Ciancotti, who serves as parish priest at Holy Mother of God Cathedral in the diocese of Ascoli-Piceno, told La Nuova Bussola Quotidiana on Tuesday that the 40 hosts are being reserved in the cathedral and every Sunday at noon are exposed for Eucharistic Adoration.

“The chapel is always full,” Don Ciancotti said. “Here in the diocese, where we have perpetual Eucharistic Adoration, we know that when a permanent sign of Christ’s Real Presence is given, people are amazed and kneel down in adoration, laying their whole life before Him.”

What will happen to the sacred hosts is still unknown, the Italian priest said, but he added that the local bishop, His Excellency Giovanni D’Ercole, has assured him that “we will soon contact the Congregation for Divine Worship” to investigate if a Eucharistic miracle has indeed occurred.

“The Lord is stronger than the earthquake and with this sign he gives us proof and hope,” he said. “For those who have faith, it is miracle that testifies to the presence of the Lord in the consecrated Host.”

A miracle amid the rubble

News that 40 consecrated hosts had been recovered from a tabernacle retrieved from the ruins of Our Lady of the Assumption [Santa Maria Assunta ] Church in Arquata del Tronto, a year and a half after a massive earthquake hit the region, first appeared in the Italian bishop’ official newspaper Avvenire.

According to reports, after recovery efforts unearthed the tabernacle it was taken to a diocesan storage facility where other sacred objects and artifacts were being held. When the tabernacle was eventually opened several weeks later, it was found to contain an overturned but unopened ciborium. Inside the ciborium were 40 hosts whose color, shape and scent were unchanged.

“One could still smell their fragrance,” Bishop Giovanni D’Ercole, said when the hosts were found. “Faith requires prudence,” but such a discovery needs “no words,” he said.

“It is a sign of hope for everyone,” he added. “Confronted with an event like this, one has to surely remain silent. It simply touches and strengthens faith in Jesus who remains alive to console the earthquake-stricken population of Arquata.”

The 6.6 magnitude earthquake that hit the region on October 30 caused immense damage to Arquata and the surrounding area in central Italy. The basilica in Norcia, the birthplace of St. Benedict and home to the Benedictine Monks of Norcia, was almost totally destroyed. It followed a similarly powerful quake in the region two months earlier, on August 24, which killed almost 300 people and destroyed several towns in central Italy.

Don Ciancotti, whose father was from Arquata, said he knew every missing person in the rubble and all the streets in the town. So together with some residents he sought to recover all the sacred artifacts that could be saved.

Many tabernacles that were recovered were empty, Ciancotti explained. But he knew that “Mass was celebrated daily” in the Church of Santa Maria Assunta “and that the tabernacle would have contained hosts when the earthquake hit.”

Months later, Don Ciancotti learned that the tabernacle from Santa Maria Assunta had been recovered and was being stored in a diocesan storage facility. And so the Italian priest had the tabernacle cleaned and brought to the cathedral.

“The problem was opening it,” he said, “but my passion for tabernacle keys helped me.”

He went to a drawer full of keys in his office and discovered one that was on its own. “I said, ‘let’s try,’ and it opened on the first attempt,” he said. But the biggest surprise was to come: “The ciborium was horizontal, but it hadn’t opened, and inside it the hosts were perfectly intact.”

“There was no trace of bacteria or mold as happens to hosts after several weeks,” Don Ciancotti said. “Instead, after a year and a half, they seemed to have been made that day.”

As the hosts had been made by nuns at the convent of Sant’Onofrio, he immediately asked them if they used preservatives. “They told me: ‘No, just flour and water,’” he said.

“Here is the presence”

Don Ciancotti confessed that he felt like John Paul II, who before the Eucharistic Miracle of Siena, exclaimed: “Here is the presence.”

In 1730, in Siena, a ciborium with consecrated hosts was stolen but the exact number of hosts miraculously re-appeared in the offering box attached to a prie dieu. The hosts, which were not consumed, did not deteriorate but remained fresh and even retained a pleasant scent. On Sept. 14, 1980, Pope John Paul II went to Siena to venerate the Eucharistic Miracle on its 250th anniversary.

How does Don Ciancotti explain the event? “Those who have faith explain it by saying it is miracle that testifies to the presence of the Lord in the consecrated Host. Those who don’t have faith will not believe it, but they can’t explain what happened, because under rubble water and flour decompose.”

“We who have faith believe in the presence of God, who does as he wills.” He then repeated the words of his bishop who said: “It is also a sign of hope for the people hit by the earthquake, because it tells us that Christ is alive and re-emerges from the rubble.”

Eucharistic miracles have often occurred in times of history when the true presence of Jesus Christ in the Eucharist was being questioned. The Italian priest said that “to think that Christ is not present in the consecrated Host is protestant. After transubstantiation the bread remains bread in form alone, but its substance changes, becoming the real Body of Christ. This is our Catholic faith.”

“You don’t need miraculous signs to believe,” he said, “but faced with the ideologies that we often chase after, this event helps us to place our hearts again in Christ, who is present and living among us.”