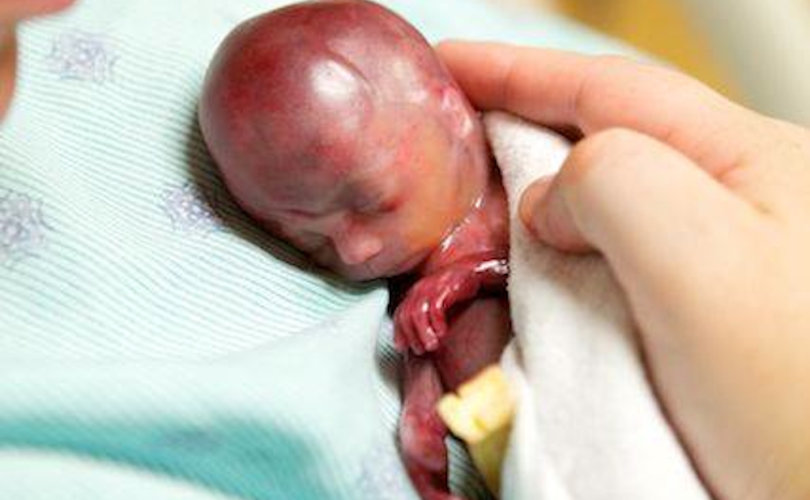 Baby Walter was placed in his mother's arms after delivery.

COLORADO SPRINGS, Colorado, May 15, 2017 (LifeSiteNews) – A photo of a mother holding her just-miscarried son effectively offers a poignant look at unborn life.

The picture, recently shared on Facebook, shows a crystal-clear shot of the perfectly formed child in his mother’s arms.

Then, in descending clarity, Mom’s hand and face are shown, with the blanket wrapping her son, and the part of her hospital gown over her heart where he lies. In the distance, the hospital bed railing is seen, rounding out the setting.

But none of it is so clear as the child in her arms.

Along with the moving image of her fully formed son, mom Lexi detailed the account of losing her child in the post shared by Save the Storks.

“Friday, June 14th did not turn out as I expected,” she began. She was at 19 weeks and three days pregnant when she lost her son.

Lexi went on to tell how she had some spotting the week before but considered it normal. However, she opted to call her midwife, who said it was best to be checked, so they headed for the ER.

“They found a heartbeat right away,” Lexi recalled. “Hearing the heartbeat immediately put me at ease.”

But she began to feel some pain, and soon it was clear she was in labor.

Lexi shared her reaction in the post, knowing it was too soon for her to deliver.

“I was bawling my eyes out because of the pain and all of the emotions,” said Lexi. “I was not mentally prepared for labor and everything in me was fighting it.”

The ultrasound tech could still locate her son’s heartbeat but wasn’t able to tell her anything else. At that point, her contractions were intense, with no breaks.

“I wouldn’t give up hope yet,” she said, “but I knew that I was losing my baby.”

Everything became blurry. she said. The doctor sat down on the bed alongside her and told her they were going to deliver the baby.

“I immediately started bawling and asked if there was any other option,” Lexi stated.

The doctor was kind, apologizing again and again.

She went on to describe her baby and how she and his father held him, and how crucial that time was.

“He was fully formed and I could see his heart beating in his tiny chest,” said Lexi.

“Joshua and I both held him and cried as we looked at our perfect, tiny son,” she said. “I held him and cuddled him while his heart was beating and will always cherish those memories.”

Like so many others who have lost a child through miscarriage, Lexi and her family felt the real human loss, and she expressed the impact this has for those who experience it.

The loss also brings home the reality of unborn life, and Lexi displayed this certainty through conveying the knowledge that her child is still alive eternally.

“We still don’t know why or how this happened, but in his short life of just a few minutes he has touched more lives than I ever could have imagined,” said Lexi.

“Just because the child within cannot be seen by us does not mean that it is a blob of cells,” she said. “Walter was perfectly formed and very active in the womb. I may never know why, but it is a comfort to know where he is and that I will see him again.”