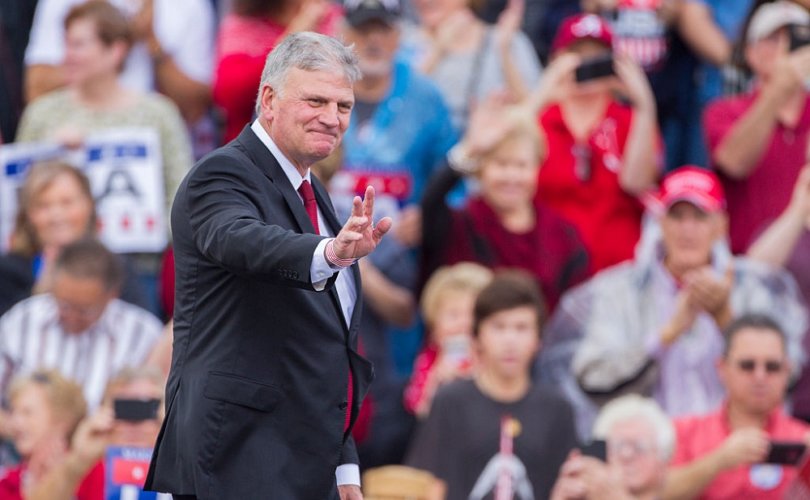 NEWCASTLE, England, February 6, 2020 (LifeSiteNews) — American Protestant evangelist Franklin Graham has now been dropped from every venue originally booked to host his U.K. tour on account of his Bible-based teachings on sexuality.

When the arena dropped the booking, Forbes expressed his satisfaction and accused Franklin Graham, the son of the world-famous evangelist Billy Graham, of teaching hate.

“Pastor Graham peddles controversial, repulsive views about LGBT people which are in direct conflict with the values we hold dear in Newcastle,” said the Labor politician.

“The vast number of individuals, organizations, and communities that supported my call for the show to be scrapped shows that Newcastle is a city that will not accept hate speech in any form,” he continued.

“This is reflected in many other towns and cities across the country who have also stepped forward to cancel these shows.”

“Newcastle is a safe city and a place where people are accepted and welcomed for who they are,” Forbes added.

He also said people in Newcastle can now “come together and look forward to hosting U.K. Pride here this summer.”

According to the Newcastle Chronicle, over 5,600 people signed a petition asking Utilita Arena to cancel Graham’s booking.

Franklin Graham has denied that he is coming to Britain to “bring hateful speech.”

“I am coming to share the Gospel, which is the Good News that God loves the people of the U.K., and that Jesus Christ came to this earth to save us from our sins,” he stated on January 27.

Graham originally planned to appear in eight British cities this year: Glasgow, Newcastle, Sheffield, Milton Keynes, Liverpool, Cardiff, Birmingham, and London. Apparently, there had not yet been a venue booked for the London October date. LGBT activists, including elected representatives in local (municipal) governments, have succeeded in getting the Christian barred from all his planned British venues.

Not everyone in Britain is onboard with Graham’s deplatforming. Last week, the Glasgow City Council joined a successful LGBT campaign to get Graham’s one Scottish venue to drop him. Later this month, they will discover that this was not universally popular among Scots.

“We’re going to have a little demonstration outside the Glasgow City Chambers,” Richard Lucas, leader of the Scottish Family Party, told LifeSiteNews.

“This is an attack on freedom of religion.”

At the same time, Lucas is delighted to have the anti-Christian bias of elected officials so blatantly expressed because “it’s bringing it home to many people.”

Lucas also believes that virtue-signaling city councillors have no idea that people think differently from how they do.

“They live in such a bubble,” he said

The Billy Graham Evangelistic Association U.K. has reported “torrents of support” for the reviled preacher and posted some of the messages.

A religious organization in Scotland called the Glasgow cancellation “regrettable and alarming.”

“Covenant Fellowship Scotland, which represents hundreds of Church of Scotland ministers, elders, and members across the country, believes the decision of the Scottish Event Campus (SEC) and its majority shareholder, Glasgow City Council, not to host the American evangelist Franklin Graham at the Hydro, to be deeply regrettable and alarming, and calls on all parties to reverse the decision in the name of religious tolerance and the right to freedom of speech and expression,” it said.

“As they liked not to have God in their knowledge, God delivered them up to a reprobate sense, to do those things which are not convenient” (Romans 1:28).

The Billy Graham Foundation, which is organizing Franklin Graham’s tour, says the missionary will still be appearing in Britain on the planned dates, but the foundation is still looking for replacement venues.