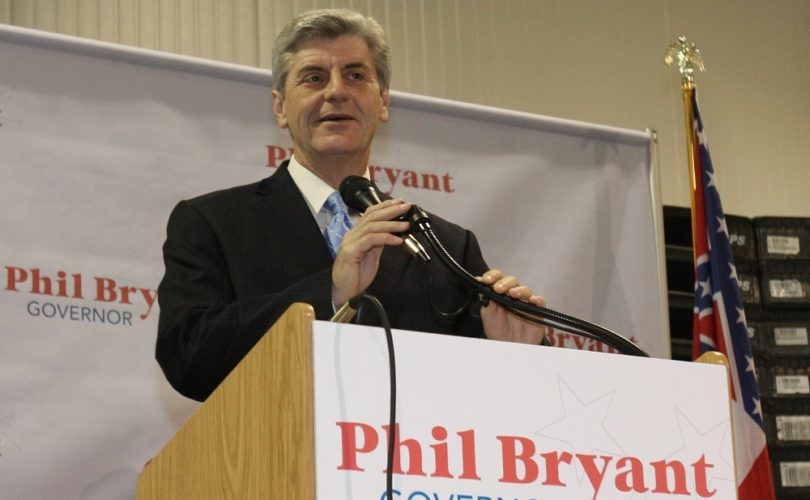 JACKSON, Mississippi, October 29, 2015 (LifeSiteNews) – Mississippi's pro-life governor is putting his campaign's money where his mouth is.

According to campaign filings reported by GulfLive.com, outspoken pro-life advocate Phil Bryant donated $500 to the pro-life Center for Pregnancy Choices in Jackson, as well as $1,000 to the Salvation Army of Greater Jackson.

Bryant has been outspoken about his pro-life principles, including stating that he wants Mississippi “abortion-free.”

“I clearly said I want to end abortion in Mississippi,” he said last year after vowing to sign a ban on abortions after 20 weeks' gestation. A personhood advocate, he also said that abortion proponents' “one mission in life is to abort children, is to kill children in the womb.”

Bryant is dramatically outspending his opponent for the governor's mansion, truck driver Robert Gray. Gray has raised $4,853 and spent $3,141, compared to Bryant's $1.6 million in fundraising and $2.7 million in expenditures.

Gray has said an improved economy would reduce the number of abortions. He was the surprise victor in the Democratic primary, competing without a website or a significant campaign infrastructure, though he is widely expected to lose to Bryant next month.

Mississippi governor: The Left’s ‘one mission in life is to abort children’