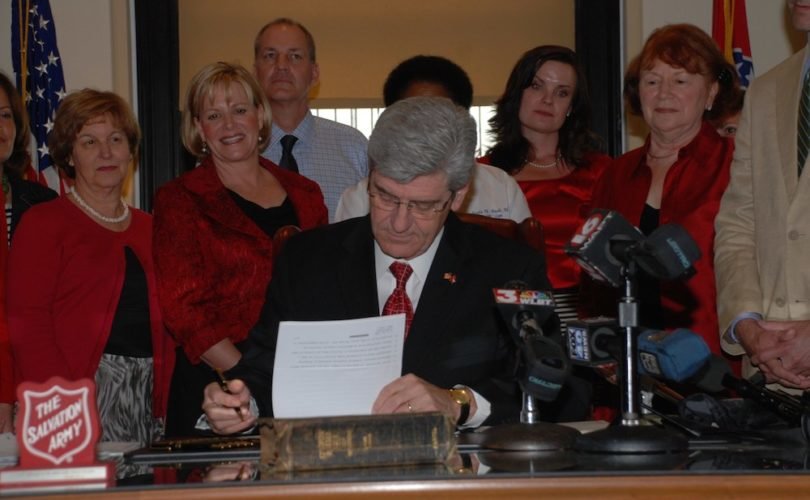 Mississippi Gov. Phil Bryant signs HB 1390, a bill that requires all abortionists to have admitting privileges at a local hospital, on April 16, 2012.Mississippi Governor's Office

The last abortion facility in the state of Mississippi will remain open, the Fifth Circuit Court of Appeals has decided, as the full court refused to hear an appeal to an earlier ruling that blocked a law that would have closed its doors.

In 2012, Mississippi passed a law requiring abortionists to have admitting privileges at a nearby hospital to assure continuity of care.

Jackson Women's Health Organization (JWHO) complained that the law targeted it – the only abortion facility in the state – and that its out-of-state abortion providers were unable to obtain such credentials in Mississippi.

JWHO, the New York-based Center for Reproductive Rights, and abortionist Willie Parker sued to prevent the law from taking effect, arguing that an abortion-free state would violate the Supreme Court's Casey decision that no law may place an “undue burden” on a woman's “right” to abortion.

In July 2012, a three-judge panel of the Fifth Circuit branded the law unconstitutional by a vote of 2-1.

Judge Emilio Garza, a Reagan appointee, wrote in his dissent that “the sole act of crossing a state border cannot, standing alone, constitute an unconstitutional undue burden on the abortion right,” but his colleagues – Stephen A. Higginson, an Obama appointee, and E. Grady Jolly, who was appointed to the court by President Reagan – said the law “effectively extinguishes that right within Mississippi’s borders.”

Mississippi Attorney General Jim Hood appealed to the full, 15-judge body, based in New Orleans. But their decision not to hear the appeal means JWHO remains open for now.

Gov. Phil Bryant said, “I am certainly disappointed in the court's decision. This not only places women's health in jeopardy, but allows physicians to practice this dangerous medical procedure without the benefit of admitting privileges to a local hospital.”

After the decision Nancy Northup, president and CEO of the Center for Reproductive Rights, called the admitting privileges law “underhanded” and said that “very real and severe harm” would “befall countless women in Mississippi if the state's only abortion clinic were shuttered.”

The state may consider an appeal to the U.S. Supreme Court to determine whether a state may enforce a law that has the effect of making it abortion-free. Mississippi attorneys note that, although JWHO would close its doors, abortion would remain readily available in neighboring states – often with less of a drive than women in southern Texas must drive.

Hood's spokeswomen said, “We are in the process of reviewing the order and considering our options.”

Gov. Bryant has stated in the past, “I clearly said I want to end abortion in Mississippi.”

Dr. Parker has expressed his opposition to other laws designed to protect life, saying a ban on late-term abortion would “create this impression that abortion providers are callous and allow people to conflate murder and abortion.”