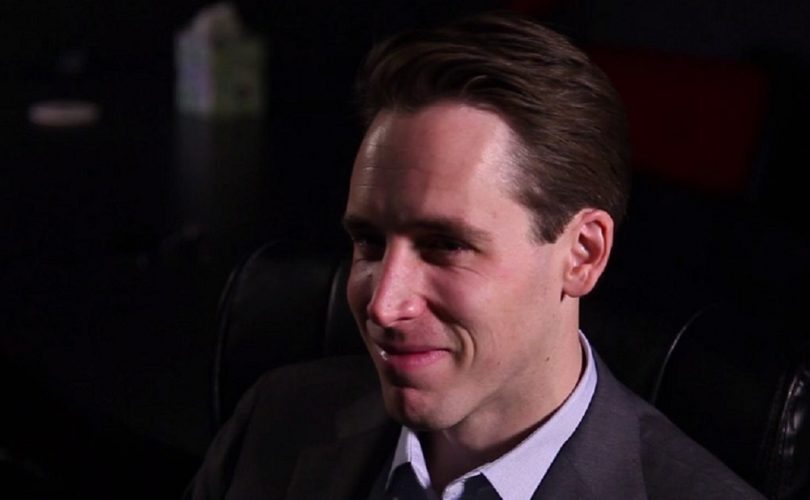 JEFFERSON CITY, Missouri, February 11, 2016 (LifeSiteNews) – A top GOP candidate for Missouri attorney general says he is the candidate who is “100 percent pro-life” and that his primary opponent is a “multiple choice” opportunist.

“I am 100 percent pro-life and have been my whole life,” University of Missouri School of Law professor Josh Hawley told LifeSiteNews. “That means I am opposed to abortion at any stage of pregnancy, and I am opposed to embryonic stem-cell research. As for my record, as a constitutional lawyer, I have fought to protect the unborn, all the way to the U.S. Supreme Court. The Hobby Lobby case, for instance, was at its core a case about the right to life: in that litigation, we defeated the Obama administration's abortion drug mandate.”

While Hawley did not actually argue in front of the U.S. Supreme Court, The Becket Fund for Religious Liberty told The Missouri Times that the firm “has had incredible success at the Supreme Court, and Josh Hawley has been an integral part of it.”

“Josh served as co-counsel both in Hosanna-Tabor v. EEOC (2012) and Burwell v. Hobby Lobby (2014). In both cases, his work and Supreme Court expertise were critical to our success at every stage of the litigation,” said Becket.

Hawley says his contribution to the Hobby Lobby case is evidence of how he would prioritize protection of the unborn as attorney general. “Abortion is not a right,” he explained. “It is a violent act against the defenseless. It violates every principle of morality and should be barred by American law. Until that day, I fully support bans on partial-birth abortion, third-trimester abortion, and indeed every limit that can receive public support.”

Hawley tied in another abortion-related Supreme Court case during his interview with LifeSiteNews. “Missouri's law requiring abortion providers to comply with surgical center standards is currently under threat at the United States Supreme Court in the case challenging Texas's nearly identical law. The current attorney general has not lifted a finger to defend Missouri's interests in that litigation. I am filing a brief in support of the Texas law as a private citizen, and I would do so as attorney general.”

In his opponent, Hawley faces Senate Appropriations Committee chairman and former assistant attorney general Kurt Schaefer. Schaefer, who temporarily closed his office in November due to a death threat from an alleged abortion supporter, also chairs the special committee that is investigating Planned Parenthood.

“Besides defending Roe as a decision that settles the abortion issue and voicing support for the 'status quo on abortion,' he also supports embryonic stem cell research, including Missouri's infamous pro-cloning Amendment 2. Indeed, Schaefer has taken tens of thousands of dollars from pro-cloning, pro-stem cell groups, including $20,000 just weeks ago.”

Accusing Schaefer of being a “multiple-choice candidate,” Hawley said that his opponent's spot on the appropriations committee means he “continues to have an opportunity to cut Planned Parenthood out of state funding.  But he takes no action.”

“The senator has always been pro-Roe and pro-cloning – until he faced a Republican primary for attorney general,” continued Hawley. “Then he suddenly started calling himself 'pro-life.' But one's position on life can never be a matter of convenience. Either one is pro-life from conviction or one is not pro-life at all.”

LifeSiteNews reached out to Schaefer's campaign on multiple occasions before and after its interview with Hawley. Despite multiple promises to do a phone interview, the campaign did not contact LifeSiteNews to respond to Hawley's accusations, which were affirmed through news releases and other information provided by the Hawley campaign and confirmed by LifeSiteNews.

“In front of liberal Boone County voters, Mr. Schaefer for years insisted we must 'get past' the abortion issue,” Hawley stated. “He unequivocally declared he would 'not do anything' to disrupt the 'settled law' in Roe. And he kept his word, supporting a pro-cloning constitutional amendment and legislation, and voting against pro-life protections for business people of faith. But within the last year, candidate Schaefer has attempted to reinvent himself as '100% pro-life' while courting pro-life voters (and quietly taking enormous checks from anti-life special interests).

“My view is that Roe v. Wade had no basis in law or fact,” summarized Hawley. “The legal reasoning and deadly effect of the case appall me.”

Hawley noted that “Schaefer was the only Republican to vote no – not once, but twice – against pro-life conscience protections for business people of faith. This legislation guaranteed that business persons who objected to abortion would not, as a matter of state law, be forced to pay for or provide abortion-inducing drugs.”

As attorney general, Hawley would swear to uphold all of the state's laws. Asked whether he would defend any state laws that allow abortions, the candidate said that “the problem in Missouri at present is not that our laws are pro-abortion, but that pro-life laws are not vigorously enforced. My first order of business as attorney general will be to enforce the state's laws as they are written, beginning with ending the sweetheart deals for Planned Parenthood.”

“That said, if pro-life advocates challenge aspects of Missouri law, I would look for every feasible way to accommodate their challenge, whether by settling the case or admitting error. I will never defend Roe or the 'right' to an abortion. Make no mistake: people will know precisely where I stand on the offense of abortion. I will continue to be a relentless advocate for statutes and measures to end abortion in Missouri.”

Hawley said that as attorney general, he “would heartily advocate further limits on abortion in Missouri,” specifically outlining bans on sex-selective abortions and abortions on children with “a genetic abnormality or Down syndrome.” He also vowed “to enhance the state's parental involvement law” through numerous methods.

“In general, I would support any restriction on abortion that can garner enough votes to become law,” said Hawley. “And I would vigorously defend such laws in court, all the way to the Supreme Court, if necessary.”