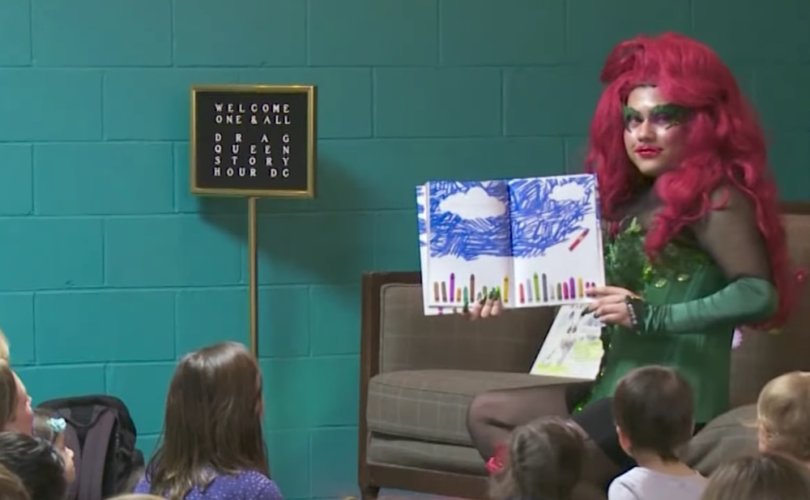 JEFFERSON CITY, Missouri, January 21, 2020 (LifeSiteNews) – A Missouri state lawmaker has introduced legislation that would empower communities to keep Drag Queen Story Hour and other radical, sexually-charged material away from their children at public libraries, to the chagrin of LGBT activists.

House Bill 2044, the Parental Oversight of Public Libraries Act, requires any library that receives taxpayer dollars to create a review board composed of five parents elected from the community, with final authority over the permissibility of sexual material.

These boards would be empowered to hold public hearings and render verdicts on public concerns as to the library’s offering of “age-inappropriate sexual material,” meaning “any description or representation, in any form, of nudity, sexuality, sexual conduct, sexual excitement, or sadomasochistic abuse” that is deemed “patently offensive” and without “serious literary, artistic, political, or scientific value for minors.”

“Any public library personnel who willfully neglects or refuses to perform any duty imposed on a public library under this section, or who willfully violates any provision of this section, is guilty of a misdemeanor and on conviction shall be punished by a fine of not more than five hundred dollars or by imprisonment in the county jail not to exceed one year,” the bill states.

The bill is largely a response to the spread of Drag Queen Story Hour events, in which adult crossdressers read storybooks to children. These events are intensely controversial around the country; organizers admit one of their central purposes is to indoctrinate children about “learn[ing] to see beyond the pink and blue gender binary.” Many have exposed children to sexually-charged performances as well as drag queens who range from x-rated performers in their day jobs to convicted pedophiles and prostitutes.

“Just knowing that there are children being exposed to the agenda being pushed by the LGBTQ community is alarming, but even more so when the vehicle in these situations is our taxpayer funded public libraries,” Republican state Rep. Ben Baker, who filed the bill, told LifeSiteNews.

LGBT groups and library officials have come out strongly against HB 2044. “I was contacted by my fellow directors across the state. They’re all very very upset about it,” Neosho Newton County Library director Carrie Cline told KOAM. “The Missouri Library Association’s very aware of it, so also is the American Library Association at a federal level.”

Shira Berkowitz, communications manager for Missouri LGBT group PROMO declared that the bill was “just based on fear,” NBC News reports, and denied the Drag Queen Story Hours involve “any kind of sexual content”…while at the same time declaring them important to the “visibility of LGBTQ culture.”

“I think it is a ridiculous accusation to say that the bill would ban books or censor literature,” Baker responded. “Anything the parental oversight board would deem to be inappropriate for access by minors would still be available to adults to check out and provide to their children if they chose to do so. They already have internet filters on library PCs for the same reason, and that is protecting children from objectionable materials.”

He added that the penalty for noncompliance is no harsher than what library personnel already face for willfully neglecting other policies, such as Internet filters on library computers.

“The current law on disseminating objectionable sexual material to minors is actually a felony which is a much stricter penalty than what the bill calls for,” Baker noted. “I think it’s perfectly appropriate to have a penalty for those who would willfully ignore the wishes of the community regarding content or events available for children to view in a public space.”

Baker also revealed online that he has received death threats for his stand:

Here’s the world we live in today. Try to protect children from age inappropriate content in our libraries and in response get death threats. It seems we no longer live in a society where you can have civil discourse about ideas. #Isaiahfivetwenty  #HB2044

“I have received several death threats for me and my wife and four daughters,” the lawmaker elaborated to LifeSiteNews. “Some of the threats were from as far away as Australia. Most of the negative has been outside the state and what has been from Missouri has been outside of my district. I think most sane thinking people can agree that this is an issue that needs to be addressed.”

“The biggest problem is the false narrative that the media has created,” Baker lamented. “They have not been objective with the story and the headlines are misleading so people just run with that rather than actually reading the bill and finding out what it actually would do.”

Research by the Personhood Alliance has played a significant role in drawing lawmakers’ attention to the issue. Earlier last year, Personhood Alliance's Sarah Quale wrote an article revealing how the American Library Association (ALA) has been actively helping to promote the LGBT agenda and Drag Queen Story Hour at the local level.

In response, nearly 60,000 people have signed LifeSiteNews and Personhood Alliance’s petition calling on the ALA to immediately cease its promotion of Drag Queen Story Hour events. “It is common knowledge that to expose children to sexual concepts beyond their years is tantamount to child abuse,” the petition argues. “And unwary parents, trusting that the library system would never be used to corrupt their children, are taken by surprise.”

Those shocking revelations, along with the hand-delivery of nearly 100,000 signatures from LifeSite, Personhood Alliance, Activist Mommy, and CitizenGO to the ALA’s head office in Washington, D.C., have provoked interest from legislators all over the US.